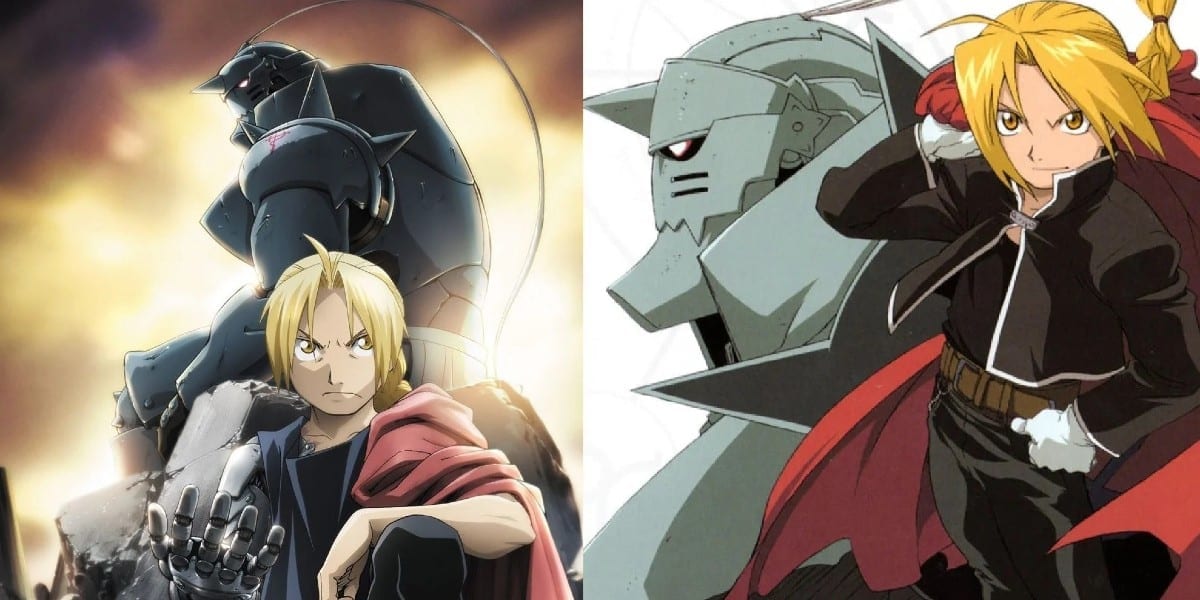 Fullmetal Alchemist is a Japanese shōnen manga series written and illustrated by Hiromu Arakawa. It follows the story of the Elric brothers who are in search of a way to return their bodies to normal, only to discover a larger conspiracy that threatens the whole continent.

The original manga debuted in 2001 and ended in 2010 after a total of 27 volumes, becoming one of the most popular manga in the world. It was adapted into two anime series and a live-action movie. There are also several video games based on the franchise.

Now that we’ve given you a proper introduction, let us discuss the topic of today’s article in more detail.

The manga was initially serialized between July 2001 and June 2010; the publisher later collected all of the individual chapters into a total of twenty-seven tankōbon volumes.

The manga is set in the fictional country called Amestris, in a steampunk world that was primarily styled after the European Industrial Revolution. In this fictional universe, alchemy is one of the advanced natural techniques that revolved around scientific laws of equivalent exchange. Genre-wise, the manga is usually categorized as steampunk and dark fantasy.

The story follows brothers Edward and Alphonse Elric, who are raised by their mother in the remote village of Resembool.

Their father, a noted and very gifted alchemist, abandoned his family while the boys were still young; during their childhood, the brothers began to show an affinity for alchemy and became curious about its secrets.

After their mother Trisha’s death, the boys traveled their steampunk world to advance their alchemic knowledge under teacher Izumi Curtis.

Upon returning home, the two decide to try to bring their dead mother back to life with alchemy. However, since human transmutation is a taboo, it is practically impossible to do properly.

In the fiasco that followed, Al’s body was completely obliterated, and Ed lost his left leg. In a last-ditch attempt to keep his brother alive, Edward sacrifices his right arm to bring Al’s soul back and houses it in a nearby suit of armor; Edward later received prosthetic limbs.

After the incident, the brothers decide to burn their home down and head to the capital city to become government-sanctioned State Alchemists.

After passing the exam, Edward is given the nickname “Fullmetal Alchemist” by the State Military, and the brothers begin their quest to regain their full bodies back through the fabled Philosopher’s Stone.

Along the way, they discover a deep government conspiracy to hide the true nature of the Philosopher’s Stone that involves the homunculi, the alchemists of the neighboring nation of Xing, the scarred man from the war-torn nation of Ishval, and their own father’s past.

The original anime had a solid animation. The colours were excellently chosen and executed, the backgrounds were nice and the overall drawings were great. The fights were also properly dynamic and the whole animation was really on a very, very high level. The main issue was the relatively large number of stills present throughout the anime, but even that wasn’t – well, not really – a big deal.

Anime series are notoriously known for not being consistent with good animation, especially after the production studio changes after some time. Brotherhood was, luckily, produced likewise by the studio BONES, the same studio that gave us the great animation back in 2003. And BONES kept its reputation as Brotherhood was even better when it came to animation. All of the things that worked well in the original series were kept, but the backgrounds were better animated and the “talking head” effect was mostly eliminated throughout the series.

So, although the differences in animation aren’t that big, we can say that Brotherhood provided us with better and upgraded animation than the original series.

The soundtrack was really a strong element of the original series. Both the anime and its movie sequel featured a beautiful and memorable soundtrack composed by Michiru Ōshima. The most famous composition is undoubtedly “Bratja”, which was played multiple times throughout the original series – as a vocal version, violin and piano solo. “Bratja” is today considered to be one of the greatest anime compositions in history. Brotherhood, on the other hand, never produced such a memorable composition such as the original series, but the soundtrack, composed by Akira Senju, was still beautiful and pretty enjoyable if you ask us. While you read, enjoy “Bratja”:

As far as the opening and ending songs go, each series had its original songs. The songs, along with their artists and the episodes they were used in, for the original series were:

All of this changed during Brotherhood, which also included three insert songs, something which wasn’t featured in the original anime. The songs were:

Before you continue, here’s the 4th OP song from Brotherhood for your enjoyment:

Strictly character-wise, there is a large number of differences between the two series. Fullmetal Alchemist followed Arakawa’s manga during its first half, after which it went its own way and became more original.

This is much due to the fact that the original manga was not finished when the anime aired and the writers didn’t have a lot of material to work with so they became creative.

This led to some supporting characters being explored more in the second half of the anime, while others – that appeared later on in the manga – never appeared in the show. In that aspect, Brotherhood, which followed the original manga, was more accurate in terms of character introduction and development.

A big change was made to the Homunculi, the main villains of the whole series. Each Homunculus was named after one of the Seven Deadly Sins.

In both anime series, Lust, Gluttony and Envy remain essentially the same and faithful to the manga, with the exception of Lust being the primary antagonist in the original series with a massively expanded role, while in Brotherhood, Lust is the first of the Homunculi to die.

However, the other Homunculi – Pride, Wrath, Sloth and Envy – are completely different. In Brotherhood, Wrath is Fuhrer Bradley while Pride is his son. However, in the original anime, Bradley is actually Pride.

Wrath was a failed transmutation of Ed and Al’s mentor, Izumi, in the original anime, while Greed is created by Izumi’s mentor. Arguably, most startling of all is Sloth, who in the original is actually Ed and Al’s mother Trisha. This, of course, wasn’t kept in Brotherhood.

All of these differences changed how the Homunculi were created in both series. In Brotherhood and the original manga, all the Homunculi are created by Father, the true antagonist of the series.

However, in the original series, a Homunculus is created from a failed human transmutation that was found by Dante.

In addition to all of this, because each Homunculus is actually a recreation of a previous human, when a Homunculus comes in contact with a remnant of their former selves in the original series, they are extra vulnerable.

There also other smaller differences scattered throughout the two series, but it would take up too much of your time to list absolutely all of them, so we are going to wrap this up with the last major difference – the final villain.

Namely, Dante and Father both have ties to Hohenheim, with Dante being a former immortal lover of the Elric Brothers’ father while Father is tied with his origins as an alchemist and an immortal.

While Father creates the Homunculi, Dante just stumbles upon them in the original series. Their plans are different, and as the series becomes increasingly centered around their goals and wants, the plots further divide.

The last major differences between the two series are their plots. Namely, due to the fact that the producers of the original anime ran out of material from the manga at one point, they decided to continue with the show, but the writers created a completely original storyline for the remaining episodes.

On the other hand, Brotherhood was able to follow the manga and finished its run with the manga, which enabled it to fully adapt Arakawa’s original story, without making things up along the way.

Having said this, we have to state that the first 26 episodes of the original anime and the first 10 episodes of Brotherhood are completely identical plot-wise, as they adapt the manga up to the point when Maes Hughes dies.

After that, the original manga went its own way with an original plot, while Brotherhood continued with adapting Arakawa’s story as it was presented in the manga.

The original anime relied heavily on cliffhangers and although a large portion of it was original, there was very little filler content.

Brotherhood is a completely different experience for those that have seen the original anime series but haven’t read the manga.

Why? Simply because Arakawa’s story is different from the story of the original anime. In that aspect, you will see a lot of familiar faces and situations, but in a completely different context, which might be a tad confusing.

As far as the endings go, the ending of Brotherhood, which was faithful to the original manga, was praised for its authenticity and its epic character.

On the other side, the ending of the original anime if most often quoted as its worst part, with reviews ranging from horrible to bizarre. The original anime actually ends with the movie Conqueror of Shamballa, which is – in our opinion – pretty strange.

Namely, Ed gets sent into an alternate dimension similar to ours, where he ends up trying to survive in a fictional version of Nazi Germany while the other characters try to find him.

The ending involves a lot of characters scattered across dimensions, which caused a lot of confusion among fans, Greed taking on a new transformation, and a cameo from Hitler. Because why not.

There you have it. As you can see, the differences aren’t that numerous, but they are large as far as the narrative is concerned.

Brotherhood would be a better choice if you ask us because it faithfully adapts Arakawa’s manga and presents the story as it was meant to be told; surely, this iteration might lack in originality, but people don’t always like when things are drastically different.

And with the first series, they are – Fullmetal Alchemist has a completely original narrative during its second half, which can be confusing and not appealing to everyone. This is, of course, just our opinion and you can watch both if you prefer it like that.