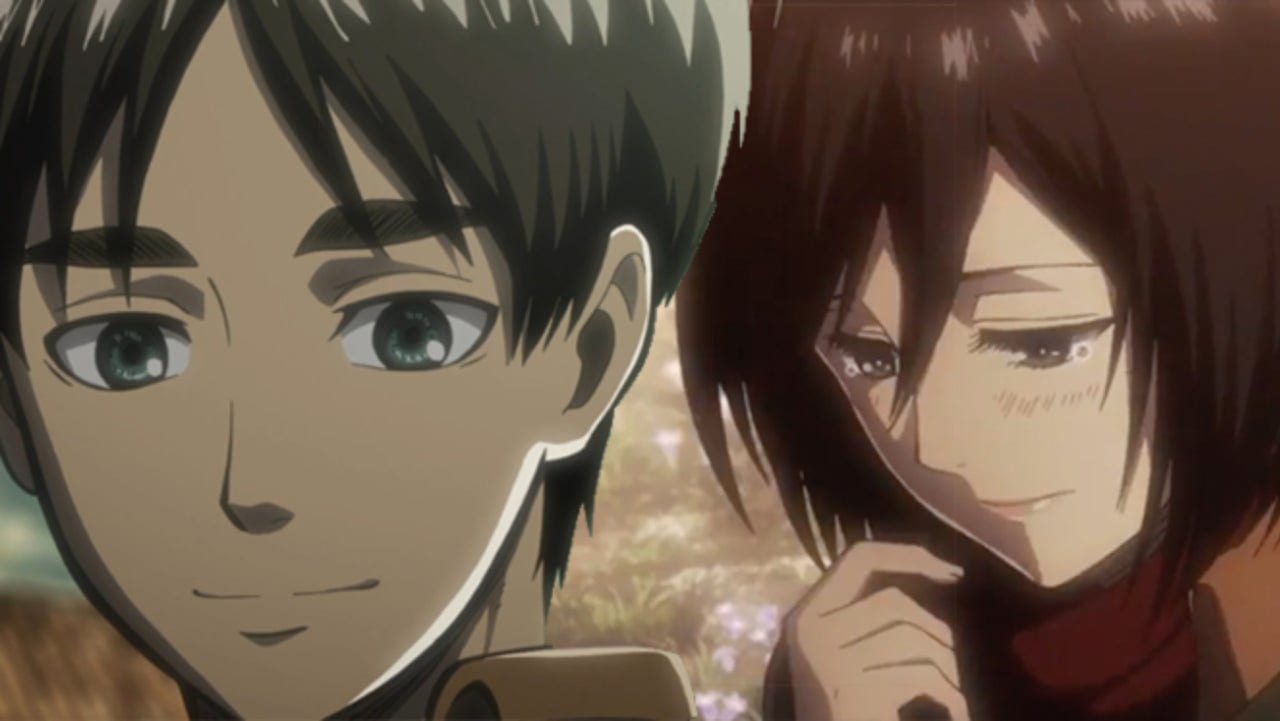 Attack on Titans, or Shingeki no Kyojin in the original Japanese, is a beloved anime series that was released in 2013 and has been running for three seasons. It is based on a manga comic of the same title, created by Hajime Isayama. The series is set in a story world where people live within Walls that are built to protect them from giant creatures called Titans, who are vicious and consume humans. The series’ protagonists, Eren Jaeger and Mikasa Ackermann grew up together because of a tragedy that left Mikasa orphaned at just 9 years old. It follows the dynamics of the two as they enlist themselves in the Scout Regiment, an army division that fights the Titans, after they witness a Titan kill Eren’s mother. Throughout their journey, Eren and Mikasa’s will-they-or-won’t-they relationship leads fans to believe and look forward to the day they end up together. Everything Mikasa does may show that she loves Eren, but does Eren love Mikasa back?

Although the relationship between the two is complicated and is still awaiting resolution, it is safe to say that Eren does love Mikasa.

Eren and Mikasa became adoptive siblings after Mikasa’s parents were killed by human traffickers in their home when Mikasa was very young. The murderers were seconds away from killing Mikasa when Eren showed up at their house by chance and saved Mikasa from the murderers. Since then, Eren’s family took Mikasa under their wings, and Eren and Mikasa grew up together. As they grow older, Mikasa begins to go around protecting Eren and fighting his fights for him. She feels she is indebted to Eren for saving her life. This behavior may indicate feelings of love on Mikasa’s side, but the answer to the question of “does Eren love Mikasa” is more complicated and nuanced than it seems.

Is Mikasa in love with Eren?

After being adopted by the Jaegers, Eren’s mother, Carla, would often rely on Mikasa to look after Eren. Both she and Mikasa know that Eren’s tendency to prove himself is extremely self-destructive, which is why Carla personally asked her to save him from these tendencies. However, I believe the conflict also lies in how Mikasa expresses this love for Eren. Given her traumatic past, it seems as though violence is the only language in which she knows how to express this love and gratitude for Eren – He killed to save her, and therefore she must do the same.

This love seems to be deeply rooted in the fact that she feels indebted to both Eren and his family for saving her life and raising her, which is why she feels obligated to follow Carla’s wishes. Unfortunately, what Mikasa sees as repaying a life-long debt, Eren sees as an incessant attempt to undermine him. As a result, he forces himself to prove to others that he is not useless, that he is capable of defeating the titans alone.

This culminates in an episode in season 2 where Mikasa and Eren witness the death of their mentor figure, Mr. Hannes. Eren breaks down in tears and proceeds to blame himself for the death of all their loved ones, saying that he was never able to protect any of them. Here we see Mikasa admit how she truly feels for the very first time. She reminds Eren that he is not useless, that he protected her and gave her shelter when no one would. For the first time she uses her words to tell Eren how she feels, it was something he needed to hear.

In conclusion, I would say that what started as a love one would show to a younger brother, grew to become something more. Even though it is not explicitly stated that Eren feels the same way about Mikasa, what he says to her is more than enough to prove that Eren does indeed care about her by promising that he would take care of her as long as she needed.

Will Mikasa and Eren get together?

Even though it has been teased through several moments including the ones previously mentioned above, it is quite a frustrating question to answer given that Eren seems to be completely oblivious to Mikasa’s feelings.

It’s clear that Eren is fixated on vengeance. Seeing his past trauma, one would completely understand how it has consumed him; so much so that I believe he made the choice to remain solely focused on achieving it.  Although this may be interpreted as unrequited love on Eren’s part, I think there may be a moment in this coming season where Eren is forced to make a decision between the things he holds dear.

In any story, the protagonist will always be put in situations where they have to make a difficult choice. These choices will in turn create consequences that shape the character’s arch. In the case of Mikasa and Eren’s arch, there is still yet to be another choice that either pushes Eren closer toward or farther away from Mikasa.

It’s difficult to picture Mikasa as a damsel in distress. The reason being that the audience has been conditioned to believe that Mikasa is an unstoppable force; comparable to the likes of Captain Levi and Annie Leonhart. Mikasa has proven herself physically capable on multiple occasions: surviving the attack on Wall Rose with an empty gas canister, and being one of the only characters to successfully defeat the Armored Titan. However, this does not change the fact that she is still a mortal fighting a battle against enemies that are progressively becoming stronger. Who’s to say there won’t be a moment where her skills just aren’t enough?

There is still much to be answered in the coming seasons of the show. But one certainty is that it will take much more than a Titan to force Eren into a decision regarding his feelings for Mikasa. In order to answer the question of whether or not they will get together, one must first ask “which one does Eren consider more important? His vengeance, or Mikasa?”.

As far as feelings go, we have previously established that Eren promised to take care of Mikasa for as long as she needs. But again, this is not a promise that confirms his feelings for her. We have seen time and time again that Eren will go to great lengths to protect his friends. What makes this promise anything different from what he promised for Armin? Who’s to say this is not another attempt to prove himself?

Assuming that the writers have planned a romance between the two, they have definitely taken their time with developing the idea of a romance. In that sense, they have drifted from the traditional construct of a narrative. So the answer to that question would be, yes that is highly likely; however, to answer the question of when would require a different discussion entirely.

Every narrative can be boiled down into two simple categories: a set-up and a pay-off. A set-up serves to lay down the context of the story and foreshadows the result, while the pay-off is the culmination of all the events that happen in the story. The quality of the pay-off is strongly dependent on the set-up and likewise vice versa. Most importantly, the timing of a pay-off also plays an important role in its effect on the audience; too early and the audience is confused, too late and they’re uninterested.

In the case of Attack on Titan, we have established a love story in which one person feels one way while the other remains to be said. Here in itself, we have a pretext for two possible scenarios: one in which Eren reciprocates Mikasa’s feelings and they do get together, and another where they don’t.

Regardless, whether or not there will be a kiss depends on the direction that the writers decide to bring this relationship. We have established that Mikasa has developed feelings for Eren. There has also been another set up in the scene in season two where Mikasa seems to be leaning in to kiss Eren after his emotional breakdown. This at least clues us in on where they are taking this relationship in the upcoming season.

Right now, the ball is in Eren’s court, he has to make a decision regarding where he wants to bring this relationship. Will he decide to pursue his feelings for Mikasa? Or will he remain hellbent on revenge? Referring back to an earlier point regarding action and consequence, whatever decision he makes will affect whether or not he will lose Mikasa.

Going through the set-ups planted by the writers in earlier seasons, we can expect there to be a pay-off coming very soon. Mikasa and Eren’s relationship have clearly started taking the turn into a romance. Now that Mikasa has made the first move, the upcoming season is likely to become a waiting game to see what Eren chooses to do next. Having established the direction and intention of the relationship, it is looking very likely that there will be a kiss in the upcoming seasons of the series. However, reiterating the pacing issues with this series, the question of when remains to be seen. Given that timing is an important component of a pay-off, this pacing problem could possibly create an anti-climactic pay-off.