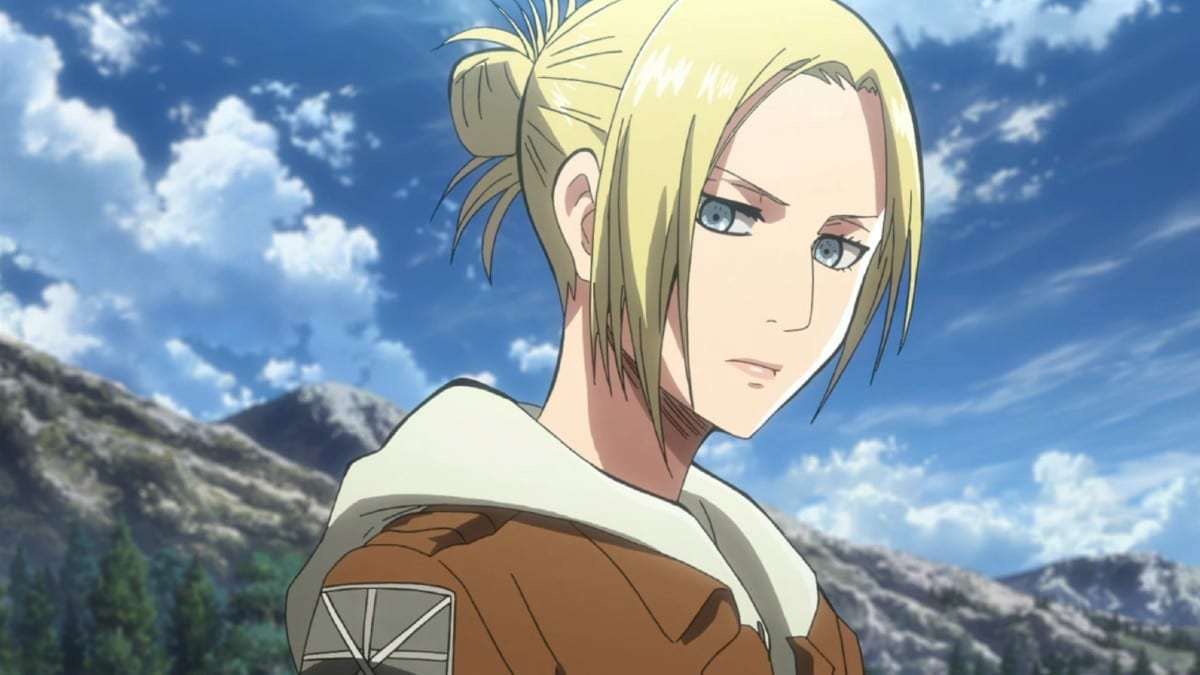 Attack on Titan is a spectacular show that has enchanted audiences worldwide with its series, movies, and featured video games. One of its intriguing characters makes up the fierce warrior Annie. The lone wolf has elements of mystery, exceptional sword skills, an enticing backstory, and a hidden identity. Let’s find out what happened to Annie.

The manga follows a group of trained soldiers that protect humans from the vicious titans beyond the wall. Annie is a female that has the ability to transform into a titan at will with horned combat skills.

Annie completed the 104th Training Corps with flying colors and was also a member of the Military Police Brigade.

Her father taught her to be a mighty fighter that excelled at hand to hand combat before being honored at the 4th rank. Her challenging childhood and skills made her emotionally disconnected from those around her.

Annie, along with Bertholdt and Reiner, were trained their whole lives to kill the humans inside the walls but were on duty to not attract suspicion in the military. This made them kill titans as well, sometimes due to obligation and sometimes guilt.

What happened to Annie on Attack on Titan?

The elite array of fighters makes up the group known as Survey Corps. During the first season, their very own foundations are shaken when one of the members turned out to be a threat in disguise.

It was revealed that Annie Leonhart was a female titan, which resulted in a rematch between Eren and Annie. The match was scheduled in Stohess District, which leads to her shattering near defeat. As Eren moved to pull her out of the nape, their bodies began to combust together. Annie enveloped herself into a crystal barrier to prevent from being captured and tortured by the military. She was able to do this by tapping into her hardening ability and forming a formidable barrier that keeps her safe from them.

In the latest chapter, Eren disturbs the barrier by using the power of the founder, which unfroze the titans encased in the wall. Annie and thousands of mighty titans were trapped in the wall, which came undone when Eren used the force. As the titans began to break free and started moving. Annie’s crystal melted, and she became free again.

Does Annie come back in AOT?

The latest chapter in AOT, which is 125 in line, welcomes back Annie with open arms. Annie was encased in the wall since season 1, but after eight years, Eren chose to unharden the walls, which resulted in the female titan breaking free. Although Annie’s time on the manga was short, her return was a much-awaited milestone for the storyline. Her firm resilience and combat skills have made her return after eight years a bombastic affair.

The walls were composed of titans, which is why any titan hardening power would have resulted in this. As Eren used the founder’s power, Reiner’s armor came off, and Annie’s crystal crumbled around her. Now she has started working with Armin, Mikasa, Jean, Connie, Reiner, and others. They have captured a former group member in order to reach Eren. Her aim is to stop Eren from destroying humanity with the help of titans.

Why did Annie not kill Armin?

Fans often wonder why Annie didn’t kill Armin during the 57th Expedition. This occurred beyond the walls when Armin while riding on his horse, spotted a female titan. This turned out to be Annie as she lifted her head. Annie was on a mission to capture Eren, but as it turned out, Armin was the first to find out her true identity. As they looked into each other eyes, Annie could have proceeded to kill him right there on the spot but chose not to.

Till that point, Annie was the bad guy, but fans were introduced to another layer of her character. In her own view, Annie is not evil and is a threat only to those who in danger to her titan form. She has gone to expeditions with the group, trained with them, and in a way, considers them her friends. In short, she stood to gain nothing from hurting Armin. Some of the reasons can be compiled as

Why did Annie cry on Attack on Titan?

Reiner, Annie, and Bertholdt were on a mission but ended up losing Jaw Titan Marcel to Titan (Ymir), which resulted in a failure. This defeat meant that they could not return in triumph to their homes and had to face the dire consequences.

Each of them, including Annie, would have their titan powers taken away, which would mean death. With everything to lose, Reiner, Annie, and Bertholdt infiltrated the walls looking to end the mission. They caught Eren coming out of the Rogue Titan’s nape and understood that he processed some sort of shifter’s ability and that Attack Titan (missing for years) was with him.

Capturing him and taking him to Marley would grant them forgiveness for their mistakes. Annie had Eren in her clutches, but he was saved by Mikasa and Levi. She cried because she knew she had lost the optimal opportunity to save face and be free once and for all.

She was crying because she would have to go on without returning home and continue her tiresome spree of murder innocent people. She was running short on time as they had to return before their final year. Giving up Eren meant she would not be able to see her father and devour the pleasures of peace and glory in her homeland.