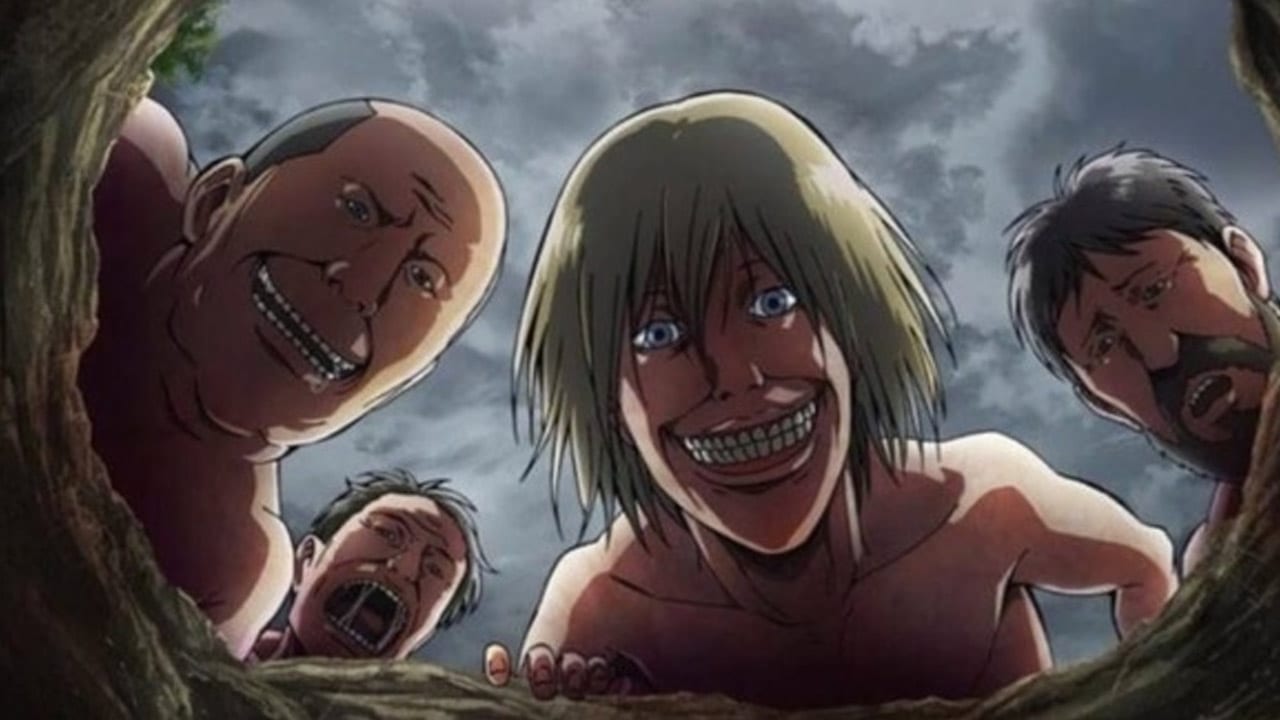 Man suffers from many fears, particularly modern man, trembles at the thought of a more giant, more adept predator hunting and feeding off him, of humankind, losing its place as alpha predator. These fears are projected onto our fantastical monstrous counterparts. So why do Titans smile?

Titans smile because they are in a constant state of euphoria, the idea of humans’ consumption to revert to their original human form.

The anime Attack on Titan isn’t the only media where smiles are placed on a monster that feeds on humanity. The joker, the clown prince of crime, has a permanent smile; Judge Death from Dredd is another example of a hyper-violent villain that sows destruction and smiles while doing it. It is even in more fantastical literature with dragons smiling behind row after row of teeth. Nature itself has several creatures that seem hell-bent on showing humankind its smile while chomping down on them like a snack; with the great white shark, snakes, alligators, all seemingly frozen with an upturned smirk at the end of their mouths.

Why are titans always smiling?

It is important to note that not all Titans are smiling; some are seen in the throes of pain, while others display quick, human-like emotions, such as a giant holding her belly as with a child. Those that are in a constant state of lunacy flash those pearly whites. These are stuck in a continuous state of happiness as if they had taken a potent happy pill and now find themselves unable to come down from the high. The actual medical term for this is euphoria. The show has, and the manga has yet to lay out why these Titans manifest these emotions; what is known is that they are almost mindless about their emotional states.

It is hypothesized that whoever makes Titans also gives them the permanent emotion stuck on its face. The maker is also responsible for whatever deformities like enlarged eyes, stubby arms, mishappened legs are all fault of its maker. The ability to create Titans has been passed down through various wielders, so each wielder makes his own and influences how it will look and even behave.

They consume humans in hopes of finding a way to revert to their human form, which is no comfort for their victims. The process is a random one where the monster knows it has to consume a Titan shifter’s spinal fluid to revert to its human form. Unfortunately for these creatures’ shifters are far and few between, and as shifters can become mighty Titans themselves, bearing gifts that make them extremely dangerous to encounter.

Why are Titans so creepy?

There constant state of one particular unchanging facial feature is disturbing to the viewer. It is unnatural to witness lunacy in such a flagrant display. It’s considered evil to practice cannibalism and to smile while devouring human sushi is horrifying. The last thing characters in the show tend to see is a gigantic hand followed by a fanatical grin and then the inside of a mouth. It’s all very surreal, even the viewer. The image of a hulking figure ever inching closer and closer like an unstoppable wave or force of nature is, for the lack of a better word, creepy.

This visual is used continuously in the world of scary and horror movies. The antagonists usually wear a mask with exaggerated human emotion. The idea here is to subvert how a smile can be warm and inviting and become something much more sinister and dangerous.

The show and the manga hint to a running theory that Yamir, when creating Titan, became lazy or disinterested. Thus, many of the Titans running around are misshaped and look like disturbing creatures to regular humans.

Fun side note Yamir seems to be inspired or based on Ymir, the first frost giant from Norse mythology created when steam generated between two realms Niflheim and Muspelheim became a drop of water that when fallen upon the ground became the first Frost Giant. His original name was Aurgelmir. He also produced misshaped sons and daughters, one of which had six heads, a gigantic cow nourished all. The story of the original frost giant seems to be the inspiration for the whole storyline itself.

Why do Titans steam?

Titans steam while transforming. To further expand on this, it is essential to now a little of the fictional history of the show Attack on Titan. The story takes place in a post-apocalyptic world where giants run rampant. The first of these was a young woman named Ymir Fritz who made a Faustian like deal with a creature known as “Devil of all Earth” who granted her gigantic size and even special powers, including the ability to create lesser Titans. Once she died after a climactic battle, her powers were divided into nine individuals. A human who can become a Titan is not human; as a descendant of Yamir, they are called shifters. They can transform from regular humans into the gigantic creatures and control them.

The Titan’s physiology works at a much higher temperature than human counterparts. When the Titans turn, they release and heat the surrounding gas that expands what is described as a carbon-fiber like material that makes up their bodies. Once the hot gas starts cooling and condensing, it looks like the air around the Titan is steaming. It is important to note that this becomes increasingly important in the show as characters within the city start turning. Size is also a factor. The bigger the changing Titan, the larger the field affected by the heat.

What is the scariest Titan?

All Titans are terrifying with their threatening city size, mindless rages, and all deserve to be mentioned. The genuinely horrifying, though, are the ones that still keep their intelligence and can control lesser monsters. The Beast is thus awarded the title of scariest. Though not the most dangerous or even most potent, the Beast presented us for the first time that other gigantic creatures were possible and even talented. The Beast possesses a hulking frame, even towering ever slightly to his giant companions. He can control some of them with his voice though no exact words were ever uttered; the monsters possess a pitching arm with great power and fantastic accuracy. Once throwing a horse at Miche Zacharious, though the Beast had other feats of accuracy, the visual of a horse flying through the air stays with the viewer.

There are honorable mentions, though. The Titan, whose name is known as the Smiling Titan, is a character considered a smaller villain both in the show and the manga. The character’s signature feature is her teeth exposed to her gums in a perpetual smile. Her fiscal appearance through towering is considerably thing to an almost skeletal and emancipated frame. It’s worth mentioning that she is not even potent compared to the Beast and others. Her creepy appearance, impact on the show’s characters, and influence deserves her the mention.

The Colossal Titan, aka the one with no skin, is one of the most recognizable figures in the show, being prominently featured on many promotional materials. Being the tallest Titan to date, this monster not only towers in comparison to others. Its most extraordinary power is its ability to generate heat and energy. It controls the steam it can produce, while most Titans generate significant amounts of energy. The Colossal Titan overshadows them all, creating massive blasts that change the landscape when he shifts to his enormous form.

The Warhammer Titan, in his nightmarish appearance, is not only a figure that is hard to forget. Its white flesh that covers his face, much like a mask, definitely leaves a lasting impression. His powers to create weapons from his hardening flesh are perturbing. Though not as tall as the Colossal Titan, this white-fleshed drenched abomination levels the landscape and guarantees haunting nightmares for years to come for the protagonist of the show.