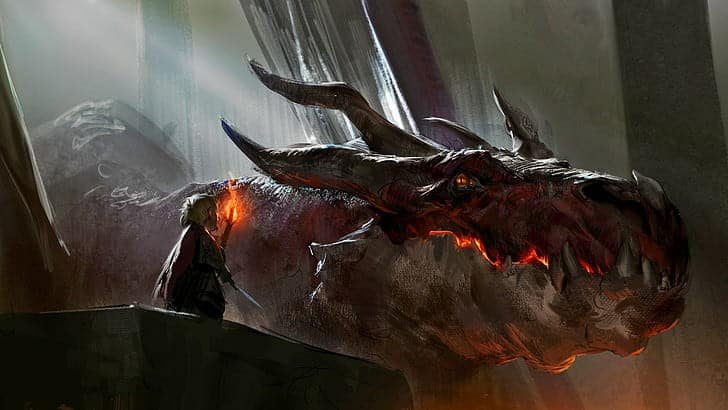 In this article, we are bringing you all the dragons in Middle-Earth, including those that appear in The Lord of the Rings, The Hobbit, and The Silmarillion books.

There are four dragons in Middle-Earth.

History of dragons in Middle-Earth/Lord of the Rings

Dragons lived throughout the First, Second, and Third ages of Middle-earth and may have lived longer. They were originally bred by Morgoth during the first age to serve as powerful war beasts. The first dragon ever seen in Middle-earth was Glaurung, the father of dragons, whom Morgoth used to great effect during the fourth and fifth battles in the War of the Jewels. Like most of the creatures made or twisted by Morgoth, they were capable of reproducing naturally. Dragons were sometimes referred to as serpents, great Worms, or simply Drakes, with the first two specifying the Wingless Dragons.

During the First Age, the greatest heirloom of the house of Hador was the Dragon-helm of Dor-lómin, which was a helm of great weight that had as its crest an image of the head of Glaurung the Dragon.

The dragons of the Second Age and Third Age were a blight upon the Dwarves and all those who hoarded treasure. Some, like Smaug the Golden and Scatha the Worm, went from the Withered Heath and invaded Dwarven kingdoms. Before the coming of Smaug, there had not been notable activities observed during the Second Age, but dragons seemingly kept serving as dark servants (partially at least).

There was an inn in the Shire called The Green Dragon, and a type of flower and firework called a SnapDragon. For Bilbo Baggins’ 111th birthday, Gandalf made a special dragon firework.

It is presumed that, after the death of Smaug in the Third Age, the great dragons had become extinct. According to Gandalf, the fire-drake race survived until at least just before the War of the Ring, and some lesser kin survived even after the war. It may have been possible that some races of dragons still existed throughout the Fourth Age.

Who created the dragons of Middle Earth?

The dragons were developed (how we do not know) by Morgoth (Melkor) in the first age, apparently some time not long after the Noldor returned to Middle Earth in pursuit of Morgoth and the Silmarils.

The first dragon to appear in the stories was Glaurung the Golden. Glaurung breathed fire but was not winged. Being imbued with the evil spirit of his master, Glaurung displayed what one thinks of as typical evil-dragon characteristics: brute strength, cunning, deceitfulness, the ability to bespell, and a greed for gold. Glaurung was instrumental in the fall of Nargothrond. He was eventually slain by Turin Turambar.

The winged dragons appeared at the end of the First Age at the final battle in which the Valar overthrew Morgoth. The greatest was Ancalagon the Black, who was slain by Earendil the Mariner with the help of the Great Eagles.

Other named dragons in Tolkien’s Middle-Earth related work include Scatha the Worm, who was slain by Fram, an ancestor of Eorl the Young, and of course Smaug of Hobbit fame. Smaug was a winged fire-drake; Scatha was likely the same, but this is not stated.

Tolkien also mentions cold-drakes–non-fire-breathing dragons. Hobbits had a legend of “Were-worms” which, assuming they existed, were dragon-like creatures (worm being an archaic term for dragon).

There’s a dragon named Chrysophylax Dives in Tolkien’s comic tale Farmer Giles of Ham, which is not set in Middle-earth, but he’s more of a comical villain.

Are there dragons in Lord of the Rings?

There were no dragons in The Lord of the Rings.

It was later revealed that Gandalf’s great concern was that Sauron would make some kind of alliance with Smaug (from The Hobbit), which would certainly be a problem for him and the fellowship. But it was really an interesting, but fragile attempt to bring The Hobbit more cogency and into the world of The Lord of the Rings.

Are there dragons in The Hobbit?

There is one dragon in The Hobbit book called Smaug, King under the Mountain.

Smaug was a fire drake of the Third Age, considered to be the last “great” dragon to exist in Middle-earth. He was drawn towards the enormous wealth amassed by the Dwarves of the Lonely Mountain during the reign of King Thror, and laid waste to the neighboring city of Dale and captured the Lonely Mountain, driving the surviving Dwarves into exile.

For 171 years, Smaug hoarded the Lonely Mountain’s treasures to himself, staying within the mountain, until a company of Dwarves managed to enter the Lonely Mountain and awaken him from hibernation. Correctly believing that the dwarves had received assistance from the men of Lake-town in entering the Lonely Mountain, Smaug left the mountain to wreak destruction upon Lake-town, nearly destroying it before being slain by Bard the Bowman.

Are there dragons in The Silmarillion?

Yes, there are three dragons in The Silmarillion.

How long do dragons live in Middle-Earth/Lord of the Rings?

Unknown. Smaug was a ‘young dragon’ when he attacked the Lonely Mountain and lived there for 171 years before being killed. In the First Age Glaurung was about 300-350 years old when he was killed.

What is the biggest dragon in Middle Earth?

Ancalagon, also known as Ancalagon the Black, was the greatest of all winged dragons. He was bred by Morgoth during the First Age and was the largest dragon to have ever existed in Middle-earth. His appearance in history was restricted to the War of Wrath.

Are dragons extinct in Middle-Earth/Lord of the Rings?

It is presumed that, after the death of Smaug in the Third Age, the great dragons had become extinct. According to Gandalf, the fire-drake race survived until at least just before the War of the Ring, and some lesser kin survived even after the war.

It may have been possible that some races of dragons still existed throughout the Fourth Age.