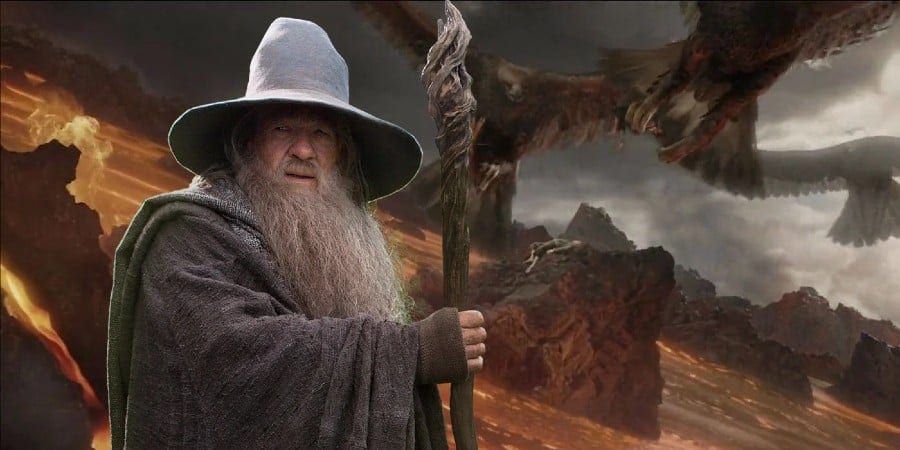 Gandalf is one of the most popular characters in Lord of the Rings mythology (if not the most popular), but many people are wondering, how old is he really? Well, we will try and answer this question.

Gandalf is about 2,019 years old, but, it is not all that simple, so continue reading our article to find out more about his true age.

Gandalf is a wizard, one of the Istari order, and the leader of the Fellowship of the Ring. Tolkien took the name “Gandalf” from the Old Norse “Catalogue of Dwarves” (Dvergatal) in the Völuspá.

As a wizard and the bearer of a Ring of Power, Gandalf has great power but works mostly by encouraging and persuading. He sets out as Gandalf the Grey, possessing great knowledge, and traveling continually, always focused on the mission to counter the Dark Lord Sauron. He is associated with fire, his ring being Narya, the Ring of Fire, and he both delights in fireworks to entertain the hobbits of the Shire, and in great need uses fire as a weapon. As one of the Maiar he is an immortal spirit, but being in a physical body on Middle-earth, he can be killed in battle, as he is by the Balrog from Moria. He is sent back to Middle-earth to complete his mission, now as Gandalf the White and leader of the Istari.

Tolkien once described Gandalf as an angel incarnate; later, both he and other scholars have likened Gandalf to the Norse god Odin in his “Wanderer” guise. Others have described Gandalf as a guide-figure who assists the protagonist, comparable to the Cumaean Sibyl who assisted Aeneas in Virgil’s The Aeneid, or to Virgil himself in Dante’s Inferno; and as a Christ-figure, a prophet.

So, as we mentioned above, Gandalf is a Maia (Spirit), created by Eru among the other Ainur before the Years of the Lamps roughly 9,000+ years before arriving in the Middle-earth. In Valinor, he was known as Olórin. He was sent to Middle-earth in human form around the year 1000 in the Third Age. That’s more than 2000 years before the setting of The Lord of the Rings, to help the free peoples fight the evil of Sauron.

Gandalf walked in Middle-earth for approximately 2,019 years, un-aging and appearing as a grey-bearded human of about 60 years old or so. He was around long before Middle-earth was created and before the Years of the Lamps. He, Saruman, and Sauron are approximately the same age – give or take. It’s difficult to pin down his true age because time had little relevance before the Lamps were set in place. 11,000 years old is a minimum figure. He’s likely much older.

The question is essentially unanswerable. Gandalf predates the creation of the world (Arda) and even the creation of the universe (Ëa). He existed before time did, and for the first few ages of his existence (probably most of his “life”), there was no way of keeping track of time.

This question makes as little sense to a Tolkien fan as the question “How old is god?” would to a devout Christian, Jew, or Muslim. In both cases, the age is literally so great that it cannot be quantified or measured in any meaningful sense.

The best we can do is to say ‘He’s so old that it is impossible to say how old he is. He’s so old that years weren’t invented until he was already an “old man”.‘ The only LotR characters who are about the same age as Gandalf are Sauron, Morgoth, and Eru Ilúvatar. In The Silmarillion, all the Ainur are roughly the same age as Gandalf. In a very real way, Gandalf is older than time itself. This is impressive, but not really unique in Tolkien’s world. As I said, all the Ainur (we don’t know how many of them there are, but it is probably in the dozens) are as old as Gandalf.

in wastes unmeasured and unexplored, and in ages uncounted and forgotten, until in the Deeps of Time and in the midst of the vast halls of Eä there came to be that hour and that place where was made the habitation of the Children of Ilúvatar

So really, we can’t put an age on Olórin, or any of the Valar or Maiar.

Gandalf, on the other hand, the embodied form of Olórin who walked Middle Earth to oppose Sauron…him we can date with reasonable precision.

From Appendix B of Return of the King, The Tale of Years, regarding the Third Age:

When maybe a thousand years had passed, and the first shadow had fallen on Greenwood the Great, the Istari or wizards appeared in Middle Earth. It was afterwards said that they came out of the Far West and were messengers sent to contest the power of Sauron, and to unite all those who had the will to resist him; but they were forbidden to match his power with power, or to seek to dominate Elves or Men by force and fear.

Exactly when Gandalf arrived is, as far as I have been able to find, nowhere directly stated; we know that he was the last of the Istari to arrive, and seemed the least impressive; we can assume something like the years 1000-1025 TA. He finally left Middle Earth with Bilbo and Frodo in 3021 TA, so I choose to believe he arrived in 1021 and stayed for exactly 2,000 years.

It’s also worth noting that he never appeared young; none of the Istari did.

They came therefore in the shape of Men, though they were never young and aged only slowly

This ‘aging’ appears to have been related to the trials and difficulties they had to endure, rather than to time.