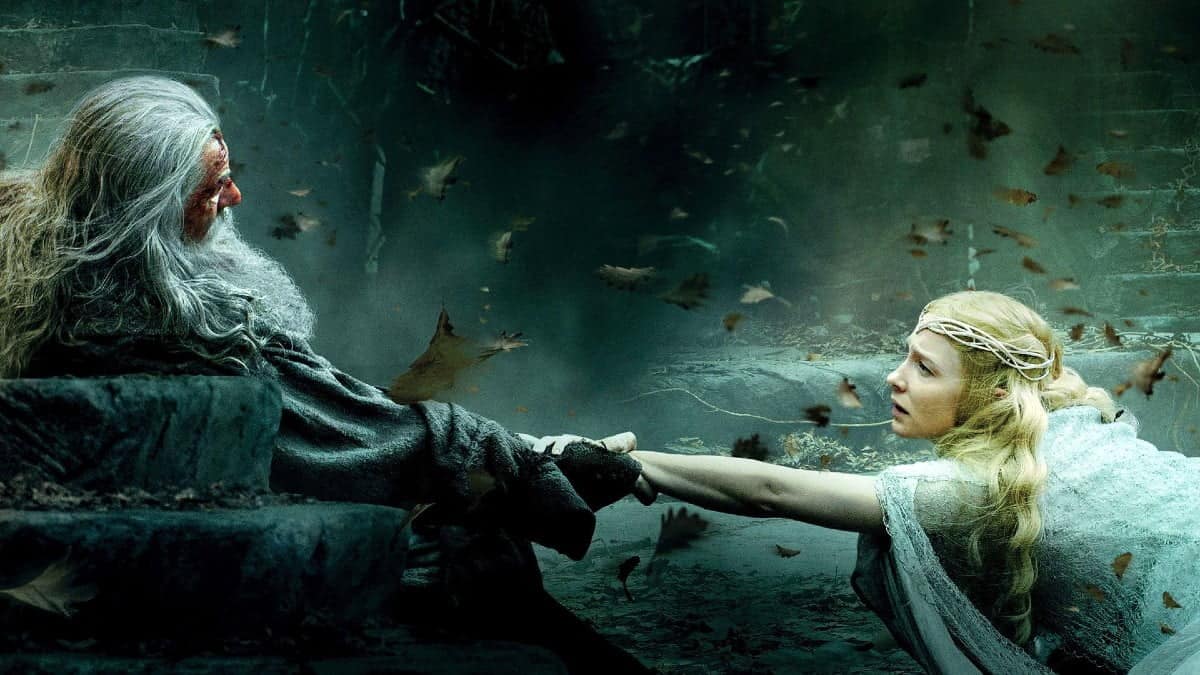 Gandalf is one of the strongest characters in the whole Lord of the Rings world, but, one of the very wise elves, Galadriel, is someone that can maybe match his might. So who is really stronger, Gandalf or Galadriel, let us explain in detail.

Gandalf the White, or in his true form, is much stronger then wise elf Galadriel in the Lord of the Rings.

There are a couple of things at work here. We will give you a detailed look at both characters, and explain why Gandalf is stronger then Galadriel. If you want to find out more about the strongest characters in Middle-earth, check out our link.

She was, however, no mere fey being, but a lady of great power. She bore one of the Great Rings – Nenya – the Ring of Adamant, and with the One Ring in her grasp as well, she would be a mighty match for the Dark Lord Sauron.

Galadriel possessed a tremendous amount of magical powers and was said to be the greatest of the Ñoldor after Fëanor.

When she still lived in the Undying Lands, she had been a pupil of Yavanna and Aulë, and she later became a friend of Melian the Maia. Hence, it can be deduced that she had learned her powers from these three illustrious personages, though the nature of her magic is still not well-understood.

The vast majority of Galadriel’s powers stemmed from the legendary artifact she controlled: Nenya, the Ring of Water. In some tales, she was also depicted with the powers of communicating over vast distances, predicting the future, and even cloaking her mind from other tremendously powerful beings (she once stated that Sauron could not perceive her mind, though she could perceive his). It is also possible that her powers of divination were either derived from or accentuated by her mirror, which could reveal events of the past, present, and future.

However, due to her incredibly enigmatic nature, even the immensely skillful Saruman and an Elf as perceptive as Elrond found it difficult to understand her powers, and they were such to bring doubt to the minds of the non-Elven inhabitants of Middle-earth. Whatever they might have been, it must still be noted that Galadriel had used them for good: protecting Lórien from any attack. She also used this formidable power to destroy the very foundations of Dol Guldur (a fortress whose power was multiplied by Sauron’s magic).

Galadriel also possessed the skill of ósanwe (the ability to communicate with others through thoughts), this can be seen after the destruction of the One Ring, when Galadriel communicated mentally with Elrond and Gandalf on their return journey from Minas Tirith.

Besides her magical powers, Galadriel was also very wise and intelligent: she was one of the very few who were not fooled by Sauron in the Second Age, and therefore suggested to Celebrimbor to hide the Three Rings. She also refrained from openly using the powers of Nenya while the One Ring was in Sauron’s possession, and only did so after the One Ring was lost (for it was only then that it was safe enough for her to do so).

When Frodo offered her the One Ring, Galadriel managed to reject the undeniable temptation, for she was wise enough to know that, though she might start off with good intentions with the One Ring in her possession, she would only become a tyrant as terrible as Sauron in the end. This could be viewed as a testament to her excellent understanding of the seductive nature of power, as well as her awareness of her own personal limitations.

Gandalf the Grey, later known as Gandalf the White, and originally named Olórin, was an Istar (Wizard), sent to Middle-earth in the Third Age to combat the threat of Sauron. He joined Thorin and his company to reclaim the Lonely Mountain from Smaug, convoked the Fellowship of the Ring to destroy the One Ring, and led the Free Peoples in the final campaign of the War of the Ring.

Gandalf is often described in The Lord of the Rings as quick to anger, and equally quick to laugh. His deep wisdom and compassion clearly derived from the patience he learned in Valinor, just as his care for all creatures of goodwill must have come from his strong sense of pity for the weak. Both his patience and sense of pity were revealed again and again, extending even to the servants of his enemies.

Keen observers of Gandalf often detected a veiled power, usually revealed in his eyes, which appeared deep and wise. He was alternately affectionate and brusque; he often surprised others with his bluntness when the time was of the essence. Gandalf consistently upbraided foolish behavior, but also richly rewarded those who acted with good intentions.

Gandalf is one of the wisest and most knowledgeable beings in Middle-earth and believed by Galadriel to be more worthy than Saruman in leading the White Council. He has extensive knowledge of many languages and writing systems used in Middle-earth, as well as in the history and customs of several of its peoples. He considers himself the greatest scholar of Hobbit traditions. His long journeys have allowed him to meet many influential and powerful individuals and form lasting bonds with them. The Hobbits know him as a masterful crafter of firecrackers.

Outside of the Shire, however, Gandalf the Grey is revered as one of the most powerful and wisest beings to tread Middle-earth, although he was wary of confronting Saruman and Sauron directly, the latter also after his rebirth, as well as of the influence of the One Ring. He was considered the most powerful member of the Fellowship of the Ring, as well as, according to Aragorn, its leader, not in small part thanks to his encyclopedic knowledge.

His vast intelligence allows him to accurately guess the thoughts of others and makes him perhaps the preeminent architect of Sauron’s defeat. He is often noted to have extremely sharp eyes that can see not only into darkness but also into the dimension of wraiths, such as when he perceived the lingering effects of the Morgul-blade on Frodo as part of his body has become almost transparent. He also has a degree of extrasensory perception, which he demonstrated by feeling Durin’s Bane while casting a spell.

Armed with an Elfin blade, Gandalf is as valiant a fighter as the other swordsmen in the Fellowship, in no way hindered by his elderly appearance when fighting or riding. He is rendered even more formidable by his magic.

Gandalf the Grey has command over a great array of spells for all situations, such as to enhance Elrond’s flood spell, giving the water the appearance of galloping knights, and seal doors shut or open them, although it should be noted that he was unable to open the Doors of Durin prior to remembering the password. He stated that Durin’s Bane nearly overpowered him with its counter-spell, forcing him to rely on a word of Command that resulted in a blast which caused the ceiling of the room beyond the door to collapse.

Gandalf described himself as “a servant of the Secret Fire, wielder of the flame of Anor”. Coincidentally, many of his spells are based on light and fire. He was able to light a faggot of wet wood simply with a touch of his staff, which he considered distinctive enough that any onlooker would recognize his handiwork.

He can cause the tip of his staff to glow with bright white light so as to see in the dark and increase the radiance at will, as demonstrated in Moria. He later displays the ability to focus this light into a beam. When fighting a pack of wolves, he set fire to all treetops on a hill with a single blazing branch, and the air became so hot that an arrow burned mid-flight. At the cost of shattering his staff, he was able to conjure a sea of white flames that caused the bridge under the feet of Durin’s Bane to crumble. Similar spells he displayed are:

Gandalf the White displays these same powers, but more advanced. When he first met Aragorn, Gimli, and Legolas in his new form, he shocked and quickly overpowered them with his agility and magic: he effortlessly disarmed the former two, one by causing his sword to burst into flames, the other by pulling the ax from his hands with a wave of his staff, and burnt the Elf’s arrow into nothing when the latter loosed it. Shortly afterward, he said that he had recently battled Sauron’s eye to prevent him from locating Frodo, and although successful, the confrontation left him spent. He also displayed the ability to communicate with horses and was able to reach Shadowfax with his mind.

Finally, he also shattered Saruman’s staff, and stripped him of his divine power.

As his unrestricted form, Olorin, he had all his previous powers massively boosted, and the ability to shapeshift. However, even this form seems to have restrictions, as the Ainur were said to have their power restricted upon descending to earth.

Conclusion – Is Gandalf Stronger Than Galadriel?

As you can see from the powers of both characters that they are one of the strongest characters in the Lord of the Rings.

But, Gandalf is one of the Maiar – spirits whose being also began before the world, of the same order as the Valar but of less degree – in short, smaller god.

In his true form, as Maia named Olorin, they shouldn’t even be compared, he is then one of the strongest beings in whole Tolkien’s legendarium.