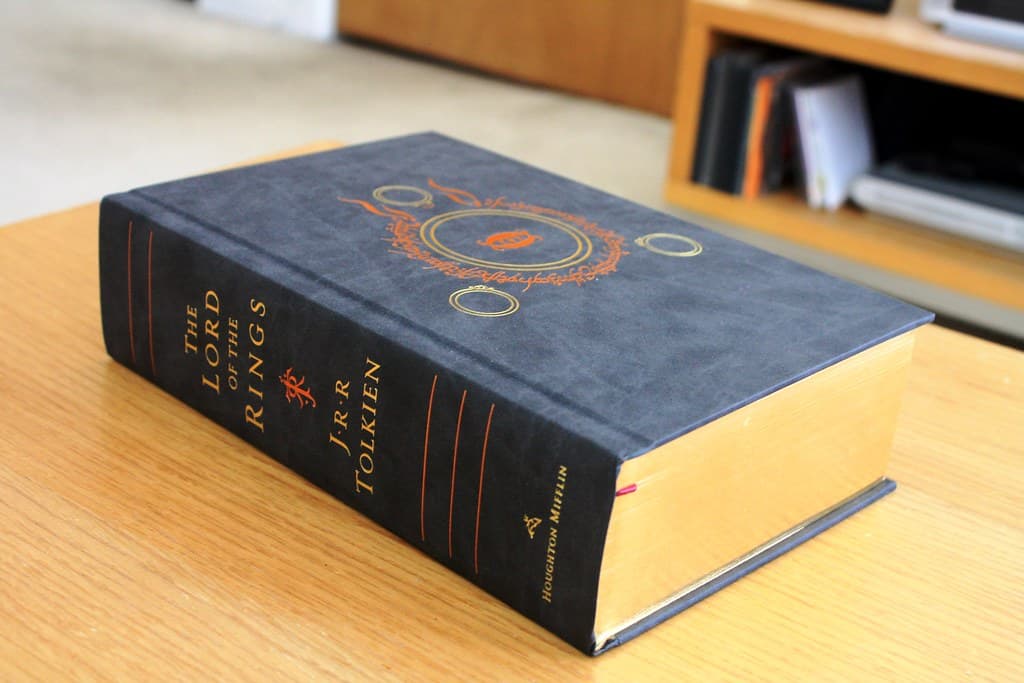 If you are here, you were probably wondering, is reading of Lord of the Rings worth your time, and is it difficult or easy to read. So, let us give you an answer to that question, and we will explain why we think it is like that.

For the young reader’s stories, characters and the world can be hard to imagine, but the language is not so hard to understand. It should be said, there are a lot of places and characters in the books, and new readers can have a hard time following it all.

If you are looking to buy them, we have an Amazon link for 4-Book Boxed Set

, which includes three The Lord of the Rings books, as well as The Hobbit.

How many books and words are in Lord of the Rings

The Lord of the Rings is an epic high-fantasy novel written by English author and scholar J. R. R. Tolkien. The story began as a sequel to Tolkien’s 1937 fantasy novel The Hobbit, but eventually developed into a much larger work. Written in stages between 1937 and 1949, The Lord of the Rings is one of the best-selling novels ever written, with over 150 million copies sold.

Lord of the Rings trilogy contains three books The Fellowship of the Ring, The Two Towers, and The Return of the King. But its world, Middle-Earth, contains many more books, such as The Hobbit, The Silmarillion, and many more Middle-earth books that we have in reading order.

Number of words in the Lord of the Rings books:

Should You Read or Watch Lord of the Rings First?

You should read Lord of the Rings books first.

Everyone should read the books and see the movies at least once in their lives. The story is fantastic, and the movies are pure magic. However, even thou both are amazing, you will see the big difference between both these mediums.

The sad truth is that, while the movies are fantastic films, they make arbitrary decisions to undermine certain characters or events for reasons with very little weight behind them. Changing Frodo and Faramir’s characters because they felt that they were “too perfect,” asserting that the One Ring can only be used by Sauron, and cutting out nearly all of Legolas’ personality were changes that just don’t sit well with most fans, and the more you watch them (if you have read the books), the worse they sit. You can still enjoy them, but you have to compartmentalize them, where the movies aren’t really the Lord of the Rings (in our minds), just amazing epic fantasy works.

Which Lord of the Rings book is best?

The best Lord of the Rings book is The Return of the King.

Even thou we have given the answer to this question, it is really very hard to do so. These three books were made to be one story, and they should be read like that.

But, the reason we have put RotK in the first place is that that book is where the real magic begins to happen.

How long does it take to read Lord of the Rings books?

On average it takes 29 hours and 33 minutes to read all three Lord of the Rings books.

Advice – Start With The Hobbit

There is some difference in style between The Hobbit and The Lord of the Rings books. The Hobbit is a fairly short book written for children. It is not as dark as the movies and actually is much shorter. You could probably start up the movies and finish the book before the movies end.

Lord of the Rings has a very different style. Maybe not so difficult to read but it is difficult to understand everything. People find new things in them after rereading it for 20 or more years. Which only makes the book better in my opinion.

Conclusion – Is Lord Of The Rings Difficult Or Easy To Read

The books are amazing, but they can be tough to read, especially if you are not native.

We highly recommend reading them, but don’t be afraid to simply skim past stuff you don’t necessarily understand. Some of its poems especially when using words that are rare for even native speakers to know. Also, the first part of the story (the first half of the Fellowship of the Ring) can be especially slow at points.

If you have watched the movies before, try to remove the images from your head. It is not easy to do, but it can help to try and treat the story and characters afresh.

I don’t think they’re technically hard to read, but they can be a bit tough to get used to, esp. if you’re very used to the movies. Tolkien’s sort of archaic prose might take more effort than usual to read, but the real difference is that the books are much denser and more languidly paced, and the first half or so of Fellowship is radically different from what was in the film.

Reading Fellowship the first time was can be slow but you will finally be settled into it during the first half of The Two Towers and will be converted by the end of TTT. After finishing The Return of the King you can go back and read Fellowship of the Ring and you will love it much more.

Tolkien studied linguistics and classics, which definitely shows in the work. There are times when it reads like an old-English epic – which was Tolkien’s original intent – with stories-within-the-story, and lots of vivid descriptions which can feel tedious. The lore of the series runs very deep, and there are pages-long stretches where nothing very exciting happens, so it can feel like trudge at times. If you really want to read it, read one book at a time and take a break with something else, rather than reading the entire novel in one shot.