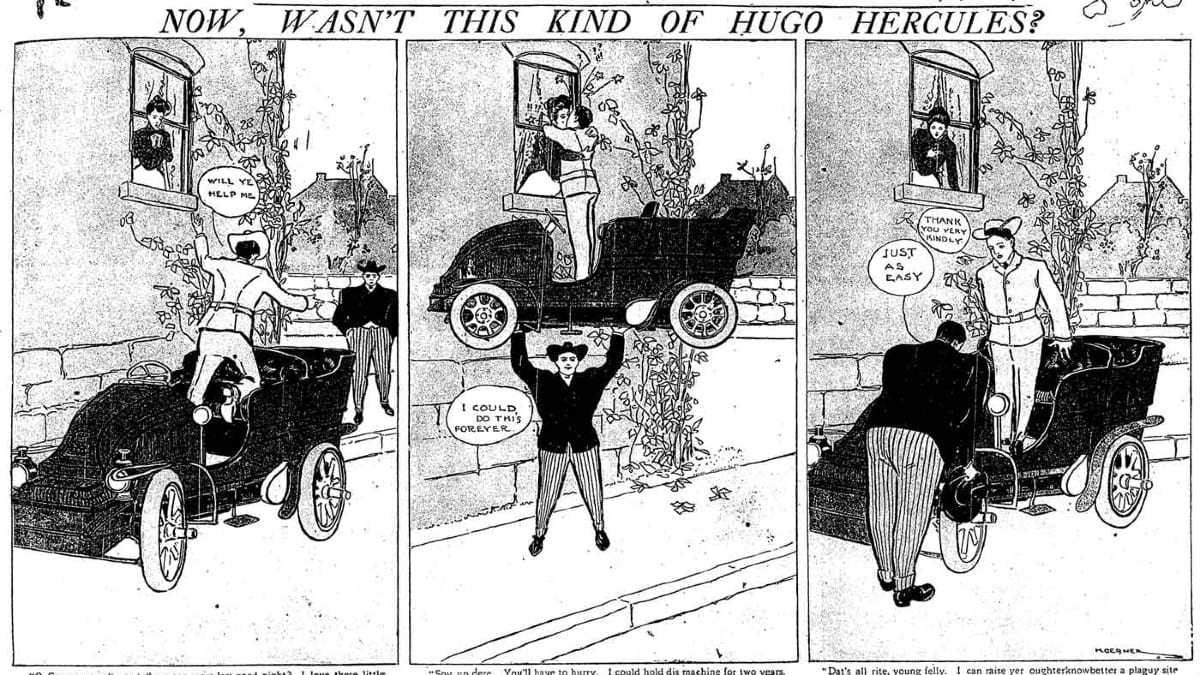 This distinction is very complex. The first official superhero ever was Hugo Hercules, who appeared in a newspaper comic in 1902. But superheroes have appeared in other media as well, and there is a whole list of potential “firsts” that we can analyze.

Due to the historical complexity of this topic, there is no one way of looking at it. This is why we have decided to take the pluralistic approach and present you the first superheroes that appeared in different forms of artistic expression, most of which are actually literature. We did not want to dwell in to the world of motion pictures, as it would unnecessarily expand this text. So, relax and enjoy another history lesson.

Before we get to our list, we are going to give you a short definition of the superhero character.

A superhero (alternatively spelled “super hero” or “super-hero”) is always a fictional character “of unprecedented physical prowess dedicated to acts of derring-do in the public interest.” A female superhero is sometimes called a “superheroine.”

By most standard, a character needs not possess actual superhuman powers to be deemed a superhero, but that is not a precisely defined rule. The term “costumed crimefighter” is sometimes used to define those characters that share common traits of actual superheroes, but don’t have any superpowers.

Now that we’ve defined our term, we can continue with our list.

Hugo Hercules – the first superhero ever

Most people – when asked about superheroes – think about the likes of Superman, Spider-Man, Batman or Hulk, but these characters did not appear until at least 36 years after the first real superhero in history, and that was – Hugo Hercules.

Hugo Hercules was a character that appeared in short comic strips published in the Chicago Tribune. He was created by Wilhelm Heinrich Detlev Körner and appeared in publication from 1902 to 1903, in a total of 17 stories.

He was depicted as a good-natured, common man endowed with superhuman strength, who strolled around town and helped people in need or got into different, yet entertaining adventures.

The Scarlet Pimpernel – a superhero in the theatre

In 1903, Baroness Emma Orczy wrote a play titled The Scarlet Pimpernel, which had a very successful run in London. Two years later, the play was adapted into a novel of the same name, which was the start of a series of stories featuring the now-famous Scarlet Pimpernel.

Sir Percy Blakeney is seemingly a very idle and stereotypical English nobleman who enjoys a life of leisure.

But, unbeknownst to everyone, he is a master of disguise who – as the Scarlet Pimpernel, a costumed vigilante – has numerous adventures and saves people who have been wrongfully sentenced to death.

He was both a spy and while he did not have any inherent superpowers, he was also the prototype of a modern American superhero character.

The Scarlet Pimpernel is very similar to the character of Batman and is today considered to be a prototype of the modern American superhero comic book character.

He has appeared in numerous literary, stage and cinematic adaptations and is one of the most popular characters from England. He is credited as the first theatrical superhero character.

A very prolific year for new superhero characters was 1911, which gave us a total of two debuting superheroes in two different media. The first character was that of John Carter of Mars, who appeared in the serialized novel A Princess of Mars, thus becoming the first magazine-based superhero.

John Carter was created by famed author Edgar Rice Burroughs and was depicted as a Virginian veteran of the American Civil War who got transported to Mars, where he began his adventures in space. He has appeared in a plethora of different adaptations, including literary and cinematic adaptations.

Nyctalope was the first cyborg in the history of literature (he had a mechanical heart and other organs, including eyes that gave him night vision, and along with it, his actual name) but also a pulp superhero who often fought different threats to humanity.

He has appeared in a total of 19 novels and several short stories, and his stories were later adapted in comic book form. The Nyctalope is thus famous for being the first literary superhero in history.

The Shadow – a historical prototype

In July 1930, a mysterious character nicknamed The Shadow appeared as the announcer of a radio show. In April 1931, The Shadow appeared in the pulp story “The Living Shadow”. He was created by Walter B. Gibson under the pen name Maxwell Grant, which became the standard pen name used by multilpe authors of stories featuring The Shadow.

Whether it’s Kent Allard or the more famous Lamont Cranston, The Shadow is considered to be a cult classic character. He was portrayed as a prototype of all modern American superheroes, especially those present in the stories published by DC Comics.

Although he was primarily a literary character, The Shadow introduced all the elements that constitute modern American superhero comic books – a masked hero with a secret identity, sidekicks, supervillains, etc. Like Batman, with who he has crossed over in comic books, The Shadow operates mostly at night and scares the criminals with his presence.

And this concludes our historical analysis. As you have seen, the development of the modern superhero character was a dynamic process and we’ve only given you a short glimpse into the whole process.

From a good-natured common man to a masked vigilante, different characters have been “firsts” in their respective categories which is why we’ve decided to analyze each of them for you and show you how it all developed before the likes of Superman, Batman or Human Torch came along.