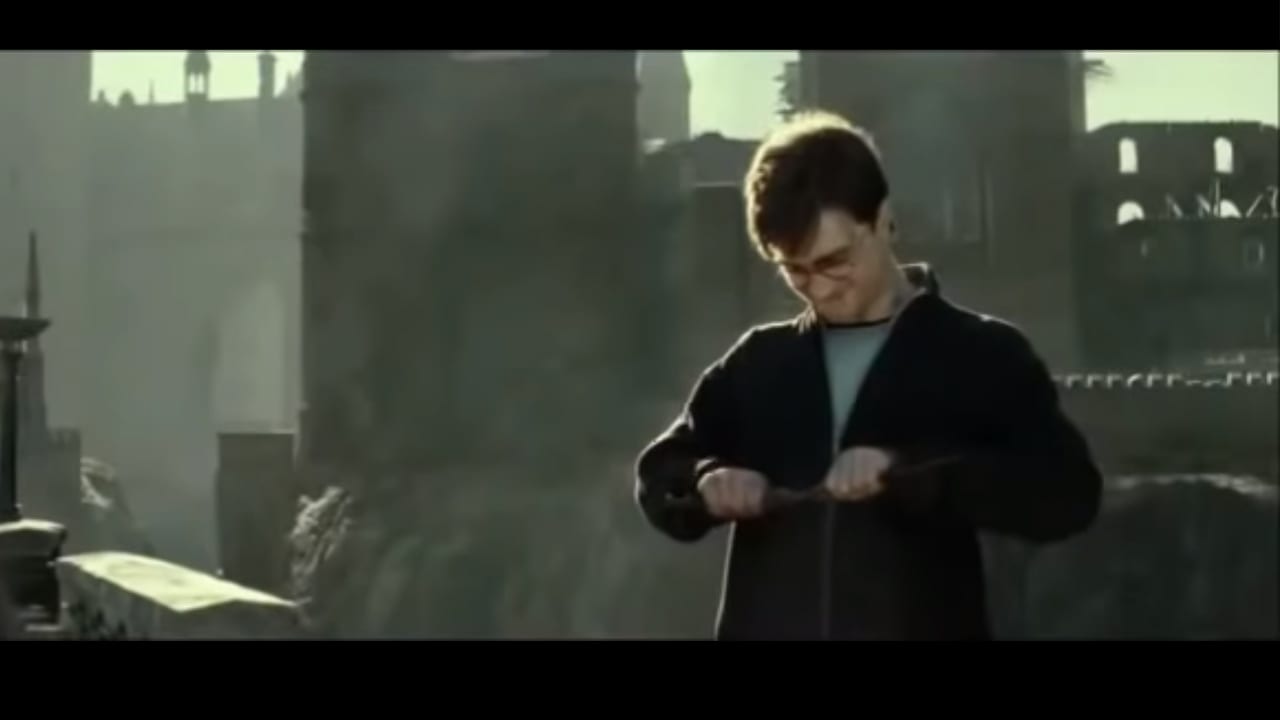 “That is the Elder Wand, the most powerful wand in the world, You’ll be invincible.” This statement by Ron keeps ringing in my head. Why did harry break the elder wand also known as the death stick? Think about it, the wand is really powerful, though, to everyone that has owed the wand, it has always bought misery and gruesome deaths. He who must not be named, Dumbledore, and a lot of great wizards were killed in pursuit of the wand. The negativity that comes with owning the wand is terrifying.

Harry broke the wand and tossed it away, because of the negative power the wand contains. It was too much for a person to wield. However, this is different than in the book. After beating Voldermort, Harry returned the wand to Dumbledore’s tomb because the power affects the person wielding it.

As a true Harry Potter lover, you must have some series of questions to ask J.K Rowling after watching Harry Potter and the Deathly Hallows part II. Some are curious about why harry broke the elder wand, why was he able to break it, did Harry break the wand in the book also? He could have fixed Hogwarts before breaking the wand, couldn’t he? How did Dumbledore win the wand from its previous successor? Who owns the elder wand? These are questions that you might have.

Why did Harry Break the Elder Wand?

Though Harry Potter is the rightful owner of the elder wand, after defeating Draco Malfoy. He resisted the urge to keep the wand for himself, and he broke it instead. Though the reason for this was not explained, some reasons come to mind. We should not forget the darkness that comes with owning the wand. Yes, Harry had control over the deathly hallows, but you could not tell how powerful they were combined. The death trailing the wand is another good reason to destroy instead of using the wand.

Some great wizards like Grindelwald, Albus Dumbledore, and Severus Snape were all defeated to attain ownership of the wand. Dumbledore arrested Grindewald, Snape killed Dumbledore, Voldermort killed snape, while Harry killed Voldermort.  Apart from these, previous wizards that have used the wand had too much power, and it consumed them. Owning the elder wand would also make Harry a likely target to those that want to own the wand.

If Harry kept the wand to himself, it must be won from him by beating him in a duel, and we have seen the length wizards can go to make themselves more powerful. Though Harry broke the wand because of the negativity and death that come with it. Harry might have used the wand for good deeds, but there is no telling what might happen later. More questions require answers. In the book, Harry did not break the wand, instead, he returned it to the tomb of Hogwart’s Greatest Headmaster; Professor Albus Dumbledore. Read further for answers to more questions.

Did Harry Break the Elder Wand in the Book?

The scene where Harry walks on the bridge with Hermoine and Ron behind me would always linger, this was where he snapped the elder wand in two and tossed it away. Though Ron was in support of Harry keeping the wand for himself, Hermoine believed it should be destroyed. The wand had enough deaths of great wizards. Besides, only three people know the real story. However, In the book, Harry Potter placed the wand in Professor Dumbledore’s tomb. He said no one should be allowed to have that kind of power.

So instead of breaking it and tossing it out as he did, he placed it in the tomb. Those aware of the true story and the true owner of the wand are Ron Weasely, Hermoine Granger, and Harry himself. In the movie, Harry snapped the wand in two and threw it away. In the book, Harry placed it in Dumbledore’s tomb and he covered it up. There have been different opinions about which option he should have gone for.

Why didn’t Harry use the Elder Wand to fix Hogwarts?

Hogwarts was built by four of the best wizards and witches to have ever lived; Godric Gryffindor, Rowena Ravenclaw, Helga Hufflepuff, and Salazar Slytherin. Yes, Harry is a talented and special Wizard. However, he does not have the skill or knowledge to fix Hogwarts. The school is fortified with several complex spells. Though Harry has learned loads of spells outside Hogwarts, it is not enough to repair Hogwarts, even with the Elder wand.

The death stick does not work at its will. Repairing Hogwarts is not similar to repairing an eyeglass or broken wand. Though repairing a wand is impossible, Harry was able to do it with the Elder wand, but this cannot be likened to repairing Hogwarts. Even when he did not destroy the wand in the book, he never went back for the wand to repair it, neither did he have any reason to regret his choice.

Who did Dumbledore Kill to get the Elder Wand?

Dumbledore never killed anyone to get the elder wand, He dueled his old and former friend Grindelwald, but he did not kill him. Dumbledore overpowered Grindelwald, and he locked him I Nurmengard. Dumbledore won the wand to defeat the dark lord. It was when Dumbledore defeated Grindelwald that he could use the wand, though he eventually died.

Professor Snape killed Dumbledore at the astronomy tower, but the wand did not belong to him because Draco Malfoy had disarmed him earlier. Apart from the previous owners that were either killed or disarmed, professor Snape was also killed by Lord Voldermort, though Snape was not the true owner of the wand. Voldermort was not aware that Draco had disarmed Dumbledore. So Voldermort could not control the wand though he had it in his hands. Harry Potter was the owner of the wand after defeating Draco Malfoy.

Who is the true owner of the Elder Wand?

Antioch Pevrell, one of the Pevrell brothers is the first owner of the Elder Wand. After several years, Gergorovitch is the next owner, the wand was stolen by Grindelwald from Gregorovitch. After Grindewald mastered the Elder wand, he was defeated by Dumbledore and imprisoned in Nurmengard. Grindelwald and Dumbledore used to be friends until Dumbledore lost his sister. They both had their passion for the Deathly Hallows in common, but the death of Dumbledore’s sister affected them.

However, Dumbledore did not duel Grindelwald for revenge, he did it to fight and overpower The Dark Lord. Later, Draco disarmed Dumbledore, to become the new master, and Harry Potter beat Draco at the Manor winning both his Hawthorn wand and the elder wand. Though Draco never used the elder wand, it was rightfully his till Harry defeated him.

The owner of the wand must win the wand in a duel. There cannot be two owners, and the elder wand decides its own destiny. When Voldermort removed the wand from Dumbledore’s tomb after killing Snape, he believed he was the rightful owner, but the wand rightfully belongs to Draco Malfoy because he disarmed Professor Dumbledore at the astronomy tower before Snape finished the job. The true owner of the wand is the person that overpowered its previous owner. When Harry potter destroyed it, he was the rightful owner.

link to A Nightmare on Elm Street (Freddy Krueger): The Complete Watching Order

Wes Craven's A Nightmare on Elm Street is one of the most popular and best horror movie franchise in the history of the genre. It all started in 1984, when the first movie in the franchise...

Continue Reading
link to Who Is Smarter: Dr. Manhattan or Ozymandias?