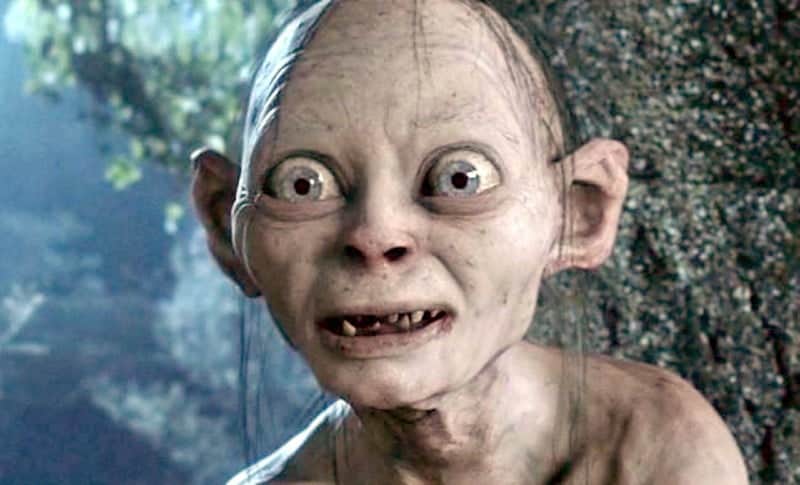 Maybe you haven’t noticed, but if you are here, maybe you have, almost no one is addressing Sméagol in books or movies as Gollum. So how or why did Smeagol’s “name” became Gollum?

The corrupting effects of the One Ring on the hobbit Sméagol are well-known: when his relative Déagol found the Ring, Sméagol became instantly affected by its influence and strangled Déagol when he refused to hand over the Ring. The One Ring changed Sméagol into a grotesque creature that lived in the darkness and shadows of goblin tunnels and caves, and fed on stray goblins/fishes or basically whatever squiggly stuff that could be found. The ring also gave him an unnaturally long life span and a crazy personality.

But how did Sméagol’s name become Gollum? Why did people start to address him as Gollum? Was the name an inherent alter-ego that came with the ring? Did someone name him Gollum?

Why or How Did Smeagol’s “Name” Became Gollum?

As Smeagol began to change physically because of his altered lifestyle, he frequently made a noise clearing his throat. This, by onomatopoeia, became ‘Gollum’. Then others who saw him, not knowing his name or that he was a Hobbit began to call him Gollum.

The first time he is seen in the Fellowship of the Ring film, he makes the Gollum throat-clearing sound a few times. This is to portray the origin of the epithet.

Here is how it is recounted in The Hobbit, or There and Back Again:

“Bless us and splash us, my precioussss! I guess it’s a choice feast; at least a tasty morsel it’d make us, Gollum!” And when he said Gollum he made a horrible swallowing noise in his throat. That is how he got his name, though he always called himself ‘my precious’.

And here’s The Fellowship of the Ring: Being the First Part of The Lord of the Rings:

“He took to thieving and going about muttering to himself, and gurgling in his throat. So they called him GOLLUM, and cursed him, and told him to go far away; and his grandmother, desiring peace, expelled him from the family and turned him out of her hole.”

This is described in detail here.

Has anyone addressed Smeagol as Gollum in Lord of the Rings trilogy books?

In the book The Fellowship of the Ring he was not addressed as Gollum but referred to as Smeagol instead.

The Return of the King, also no one addressed him as Gollum.

But in the book the Two Towers, there were some instances, and here they are

But Frodo sprang up, and drew Sting from its sheath. With his left hand he drew back Gollum’s head by his thin lank hair, stretching his long neck, and forcing his pale venomous eyes to stare up at the sky.
‘Let go! Gollum,’ he said. ‘This is Sting. You have seen it before once upon a time. Let go, or you’ll feel it this time! I’ll cut your throat.’

‘No, we won’t,’ said Frodo. ‘But we won’t let you go, either. You’re full of wickedness and mischief, Gollum. You will have to come with us, that’s all, while we keep an eye on you. But you must help us, if you can. One good turn deserves another.’

Sam got out the rope. ‘And where were you off to in the cold hard lands, Mr. Gollum?’ he growled. ‘We wonders, aye, we wonders. To find some of your orc-friends, I warrant. You nasty treacherous creature. It’s round your neck this rope ought to go, and a tight noose too.’

‘Well, Gollum, or whatever it is we’re to call you,’ he said, ‘now for it! The Moon’s gone, and the night’s going. We’d better start.’

He took a few steps away and looked back inquiringly, like a dog inviting them for a walk. ‘Wait a bit, Gollum!’ cried Sam. ‘Not too far ahead now! I’m going to be at your tail, and I’ve got the rope handy

At last Sam could bear it no longer. ‘What’s all this, Gollum?’ he said in a whisper. ‘These lights? They’re all round us now. Are we trapped? Who are they?’ … ‘Come, Mr. Frodo!’ said Sam. ‘Don’t look at them! Gollum says we mustn’t. Let’s keep up with him and get out of this cursed place as quick as we can – if we can!’

‘I don’t like the sound of it at all,’ said Sam. ‘Sounds too easy at any rate in the telling. If that path is still there, it’ll be guarded too. Wasn’t it guarded, Gollum?’

‘Hi! Gollum!’ said Sam. ‘Where are you going? Hunting? Well see here, old noser, you don’t like our food, and I’d not be sorry for a change myself. Your new motto’s always ready to help. …

‘Now, Gollum,’ he said, ‘I’ve another job for you. Go and fill these pans with water, and bring ’em back!’

‘Gollum!’ he called softly. ‘Third time pays for all. I want some herbs.’ Gollum’s head peeped out of the fern, but his looks were neither helpful nor friendly.

‘Wheew! Gollum!’ Sam called and whistled softly. ‘Come on! Still, time to change your mind. There’s some left if you want to try stewed coney.’ There was no answer.

These are all the instances when Smeagol was referenced as Gollum in Lord of the Rings books.

Information about why or how did Smeagol’s “name” became Gollum where obtained from different sources online, but mostly from StackExchange.