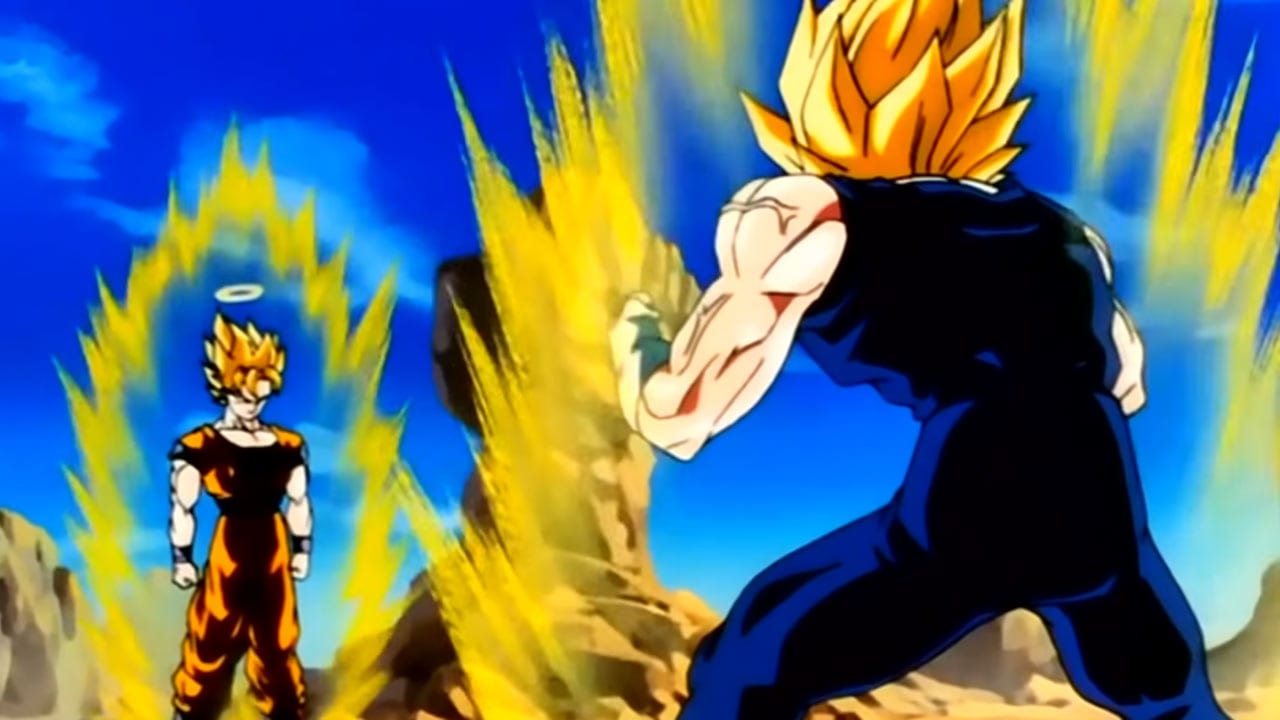 One of the most effective table-turning tools ever introduced to the world of manga and anime is doubtlessly Dragon Ball‘s super transformation power. Long thought to be just a myth, it was proven reality in one of the franchise’s most defining moments and is now an iconic sliver of modern pop culture worldwide.  We explore Super Saiyan-jin and gain deeper insight into its lofty standards of ”worthiness”.

The most crucial, requirement of becoming a Super Saiyan is a genetic link to the Saiyan race. This is because S-cells, only found in Saiyans, are the fuel for the transformation. Therefore, any pure born Saiyan, hybrid, fusion, or human being with Saiyan ancestry can access this incredible power.

Without the above requirement, seekers of this ancient ability need not read any further. However, for those who do fit the initial criteria, there are several hoops to jump through before Super Saiyan can be fully utilized and mastered. Also…Spoiler Alert.

How to turn into a Super Saiyan

No one will ever know the number of hours young kids and pre-teens have spent in meditating and focusing on “going Super Saiyan”. The unfortunate truth is that any ordinary person has a better chance of popping a temple vein than evolving the tools necessary to face Frieza’s final form. Turning into a Super Saiyan is every Dragon Ball

fan’s wildest fantasy, from the increased power, and fighting ability, to the wild and electric hair. This fantasy is, however, likely to be ruined by the necessary requirements.

Any would-be Super Saiyan would have to meet the power’s extremely stringent criteria, as proven by its relative rarity throughout the franchise. The first and most important is the presence of a large number of S-cells in one’s biological make-up. S-Cells can be increased by increasing battle power over time. Battle power is increased by clashing with difficult adversaries or enduring, and recovering from, heavy injuries. Another interesting fact is that Saiyans with gentle spirits tend to raise their S-Cell levels at a faster rate than those with vengeful or violent spirits. Once the S-Cells reach a certain level, the person can use a number of voluntary or involuntary situational factors to trigger the transformation.

It is important to note, however, that not everyone has the ability to produce S-Cells, and individuals who can are incredibly rare. How rare are S-cells? Well, they can only be found within members of the Saiyan race. The only problem with that is that the Saiyans’ home planet, Vegeta, was completely laid to waste by a certain war-mongering alien overlord. Frieza’s merciless destruction of Planet Vegeta left Goku, Vegeta, Raditz, and Nappa as the only pure-blooded Saiyans in the known Dragon Ball universes. The latter two later meet their ends, however, leaving only Vegeta and Goku.

The good news is that one does not need to be of pure Saiyan birth to access the transformation. Hybrids like Gohan and Goten, born out of Goku’s union with the human princess Chi-Chi, can easily access the Super Saiyan ability from a very young age in both the manga and anime series. Vegeta’s son Trunks and daughter Bulla are very powerful Super Saiyan-Earthling hybrids as well, despite their human mother Bulma’s lack of Saiyan abilities.   Human descendants with Saiyan blood also have the ability to achieve it, although it is much more dormant than in pure Saiyans or direct hybrid Saiyans. Clones engineered with the use of Saiyan DNA can also go Super Saiyan, as shown by the Bio-Android clone Cell.

Fusion is another way to go Super-Saiyan. Fusion is basically the merging of two beings to form one, more powerful, being with a combination of the two individuals’ powers. Therefore, if one, or both, of the fusing parties, has Super Saiyan capabilities, the fused being will have the collective Super Saiyan power level of the individuals making up the fusion. The fusion of Goku and Vegeta has produced the two most powerful fusion iterations in the Dragon Ball franchise. The first, and more common, fusion iteration is known as Gogeta, who has seen off notable foes such as Super Janemba, Broly, and Omega Shenron. The second, and most powerful, version of Goku and Vegeta’s fusion is Vegito, who made his debut in Dragon Ball Z’s 268th episode, “Union of Rivals”, back in 1995. Other notable Super Saiyan fusions include Gotenks (Goten and Trunks), Natz (Raditz and Nappa), and Future Gohanks (Future Gohan and Future Trunks).

Sex is not believed to have an impact on the ability to access the transformation, although fans had to wait until the 92nd episode of Dragon Ball Super to see the franchise’s first female Super Saiyan, Caulifla, take action during a training bout. Another standout female Super Saiyan is Kale, who goes on to become only the second Legendary Super Saiyan in any of the known universes.

Although the biological factors are the most important requirement, other factors also contribute to one’s ability to access Super Saiyan, as well as the level of Super Saiyan reached. Situational factors are perhaps the next important for accessing the transformation, at least in its most raw and unmastered form. The power was first introduced in the manga Life or Death and the anime Dragon Ball Z’s 95th episode, “Transformed at Last”, during Goku’s battle with Frieza. The transformation is triggered by Goku’s rage after his long-time best friend, Krillin, is killed by Frieza’s Death Psycho Bomb. Vegeta eventually manages to turn into a Super Saiyan as well, although his transformation is triggered by his annoyance at being beaten to the ability by Goku. This adds further weight to the notion that Super Saiyan transformations are highly sensitive to strong emotions in certain situations.

According to Goku himself during Dragon Ball Z, the transformation is fuelled by immense anger and rage. He advises his son Gohan, who is also learning to harness the ability, to imagine his loved ones being murdered by Frieza and use that strong feeling to trigger the change. The higher levels of Super Saiyan become increasingly accessible as the wielder gains more S-cells by increasing battle power, or fusing with another being with Super Saiyan abilities.

The more advanced levels of the transformation naturally require the satisfaction of all the previously mentioned criteria, but they can only be accessed through channels formed by strong focus and will. Kale, for example, uses advice from Caulifla, whom she has strong feelings for, to channel her evolution into the True Legendary Super Saiyan. An interesting observation is that some forms of Super Saiyan are unique to certain individuals, a hint to the role of one’s emotional makeup despite their will. This view also adds depth to the characters of Dragon Ball as a whole, as their various psychologies are personified through their various powers. Perhaps Vegeta’s first Super Saiyan’s transformation took place after Goku’s because, subconsciously, he believed he was second best. We will never know.

Can any Saiyan become a Super Saiyan?

The short answer is yes, any Saiyan can become a Super Saiyan. As mentioned above, the transformation is only available to individuals who can produce and increase their S-Cells. Every Saiyan has S-Cells and can pass them, and the ability to produce them, down to their descendants, be they pure Saiyans, hybrids, or humans with a genetic link to the Saiyans. Naturally, the fact that any Saiyan descendant has access to the transformation somewhat proves that each natural Saiyan can also access Super-Saiyan.

Vegeta himself once proclaimed that the Legendary Super Saiyan transformation was the “true form” of all Saiyan beings. To be fair to him I would have the same opinion, after witnessing a Hulk-ish Broly swat a Super Saiyan Blue Goku aside, dramatic Kamehamehas and all. In fact, Broly was closely studied and it was revealed, in one of his battles against the Z warriors, that his power levels were high up in the 1,000,000,000-1,500,000,000 scouter level (S-Cells) range.

Kale is another character who discovers the Legendary transformation. In Dragon Ball Super, she masters, and evolves, the transformation further by turning into the True Legendary Super Saiyan in a sparring match with Goku in Super Saiyan 3 form. Kale easily shrugs off all of Goku’s graded Super Saiyan level attacks before administering some serious pain in return. Goku’s struggles against Kale enable him to summon enough power to evolve to the Super Saiyan God form, and eventually turn the tide.