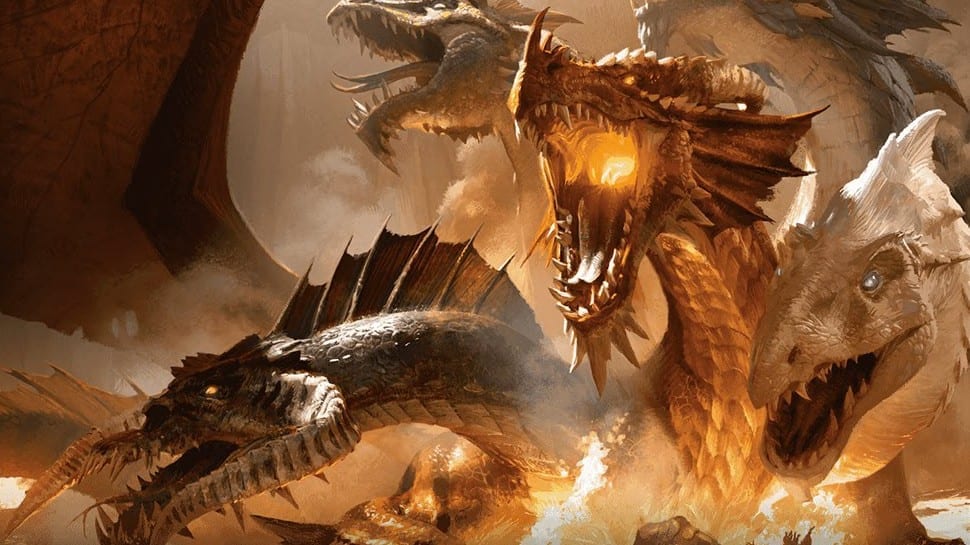 Dungeons and Dragons, often referred to as DnD, is a popular roleplaying game released in 1974 by Tactical Studies Rules, Inc. It differs from other similar games because it allows the players to build their characters from scratch. After the characters are created they embark on an adventure set in a fantasy world. All the characters have to work together to complete tasks and quests created by the Dungeon Master. He is a character that serves as a sort of referee as well as the player who controls the storyline.

These stories often include many different monsters. Dungeons & Dragons include a total of 130 different types of monsters, each having many variations. Among those are dragons and given the name of the game, they reign supreme. But which of many dragons are the most powerful?

The most powerful dragons in Dungeons & Dragons are as follows (in order from the least to the most powerful): the Ancient Dragons, Klauth, Daurgotha, Borys, Dregoth, Bahamut, Tiamat, Great Wyrm Force Dragon, Great Wyrm Prismatic Dragon, and Io.

In Dungeons & Dragons, dragons are depicted as any of various species of large, intelligent, magical, reptilian beasts that are defined by the combination of their demeanor and either the color of their scales or their elemental affinity.

If you are a low-level player there is a small chance of encountering a dragon so not many players know much about them. This article will let you in on some fun facts about these very powerful creatures.

10 Strongest dragons in dungeons and dragons

The Ancient Dragons are some of the most powerful dragons in the game. There are many types of Ancient Dragons, but two stands out the most: Red and Gold dragons.

They are pretty much the same in the strength level as they both possess breath weapons, spell-like abilities, and lucky bonuses. They spend their life in a cycle of active periods and hibernation. Their hibernation period is nothing extreme compared to the other dragons in this universe and rarely lasts over 10 years.

However, they differ in their demeanor. Red dragons are very prideful and confident making them extremely dangerous when their ego is hurt. On the other hand, Gold dragons are respected as extremely righteous creatures determined to destroy anything that dared to threaten them. Gold dragons are often considered the apex of the draconic race. They are praised for their wisdom and knowledge, which they often use in battle and make them powerful opponents.

Also known as Old Snarl is one of the oldest dragons in the entire universe who managed to not get turned into dracolich.

He is known for living much longer than most of his race normally does. He was able to surpass his race’s usual life expectancy without using the cult’s methods because he developed a magical process through which he used red dragon’s eggs to prolongate his life, increase his size and health as well as increasing his vigor.

Klauth is one of the most horrific Ancien Dragons. He is without a doubt the strongest Ancient Dragon because he is known for killing any other dragon treating to surpass him in power.

He is far more evil compared to other similar dragons and does not have any redeeming qualities besides things similar to granting boons to creatures he considered no threat.

Dragotha is a powerful undead dragon known as a dracolich.

He was a powerful red dragon and served as the mightiest consort of Tiamat until he angered her and Tiamat forced him to leave Avernus.

Making his way to Oerth, Dragotha fell in with Kyuss, and eventually became a dracolich and Kyuss’ greatest servant.

He is level 31 with over 1,400 hit points and has the power to literally drain the life of all living beings that come near him making him one of the scariest entities you can encounter.

Originating from the world of Athas Borys was not originally a dragon. He was once the Sorcerer King of Ur Draxa, Borys of Ebe. He started sacrificing the life energy of other living creatures to increase his own power. Eventually, his power grew so much that he was able to turn into a dragon.

Power-wise he is the most powerful dragon in the existence of Athas. Taking into consideration that he managed to perform this form of magic that takes enormous amounts of magical knowledge, many believe he can cast every spell in existence.

He can also use his magic to turn himself invisible and create realistic illusions of himself making him a very difficult opponent to encounter.

Dregoth rose to power after the fall of Borys. He spent millennia traveling through the universe chasing the power of the Planar Gate. While traveling he met the True Gods and studied their nature and power. With this newfound knowledge, he increased his power so much that upon his return he was considered the first true dragon god of Athas.

This immense power and his extensive knowledge of magic make him a powerful opponent.

Bahamut, also known as the Platinum Dragon or King of the Good Dragons, is one of the nine dragon deities. He created from Io’s body after his death alongside his sister.

Bahamut is a similar strength level as his sister, both of them being a level 36 and being able to deal 1600 hit points (or 1300 hit points when in his old man form).

He is also accompanied by 7 gold dragons disguised as canaries and he can summon them to fight alongside him.

Personality-wise he is a polar opposite of his sister, often being described as the most compassionate being in the universe. He was very stern in his disapproving of evil.

Tiamat is the sister of Bahamut and both of them were created from Io after his death. She is a bit more powerful than her brother as she is ranked at level 36 and is able to deal 1600 hit points.

She has five heads and is able to use them in a cooperative way while fighting. This also gives her the ability to roll initiatives five times.

The most interesting thing is that even when she is defeated there is a way for her to come back.

Tiamat is arrogant, greedy, hateful, spiteful and vain. Her constant quest for more power makes these traits stand up even more.

She is a unique chromatic dragon as she has one head for each of the most common chromatic species (black, white, blue, green and red). She has a long tail lined with sharp poisonous stingers, that aid her in battle. The stingers contain a very powerful venom which causes the recipient to die in excruciating pain.

Great Wyrm Force Dragon has the ability to create the most effective type of damage, force, which is related to pure telekinetic energy. The ability to manipulate the force energy makes it one of the most threatening creatures in the game.

After reaching the level of Great Wyrm they become almost impossible to beat with a challenge rating of 59 and an armor class of 102. They are also immune to force effects, can turn invisible and cast 36 spells

Great Wyrm Prismatic Dragon was introduced in the third edition of Dungeons and Dragons.

This dragon is essentially invincible, considering that it can only be beaten if the Dungeon Master sways the fight in your favor which isn’t likely to happen.

Great Wyrm Prismatic Dragon has a challenge rating of 66, a level that can only be achieved after playing excessive amounts of the game. In addition to that, it has an armor class of 106 and over 2000 hit points.

He is also considered the creator of the entire universe according to some legends. He was supposed to encompass all alignments but was often regarded as neutral.

Io is more commonly known as Asgorath, a dragon deity of creation. A myth from the fourth edition retells a story of how Io created all the dragons after the battle with Erek-Hus, the Primordial King of Terror. After he was slain, he created Bahamut and Tiamat from the two halves of his body.

Although he does not have a body, he still lives on through his consciousness even intervening at times to protect his children. However, he has the ability to appear as any type of dragon.