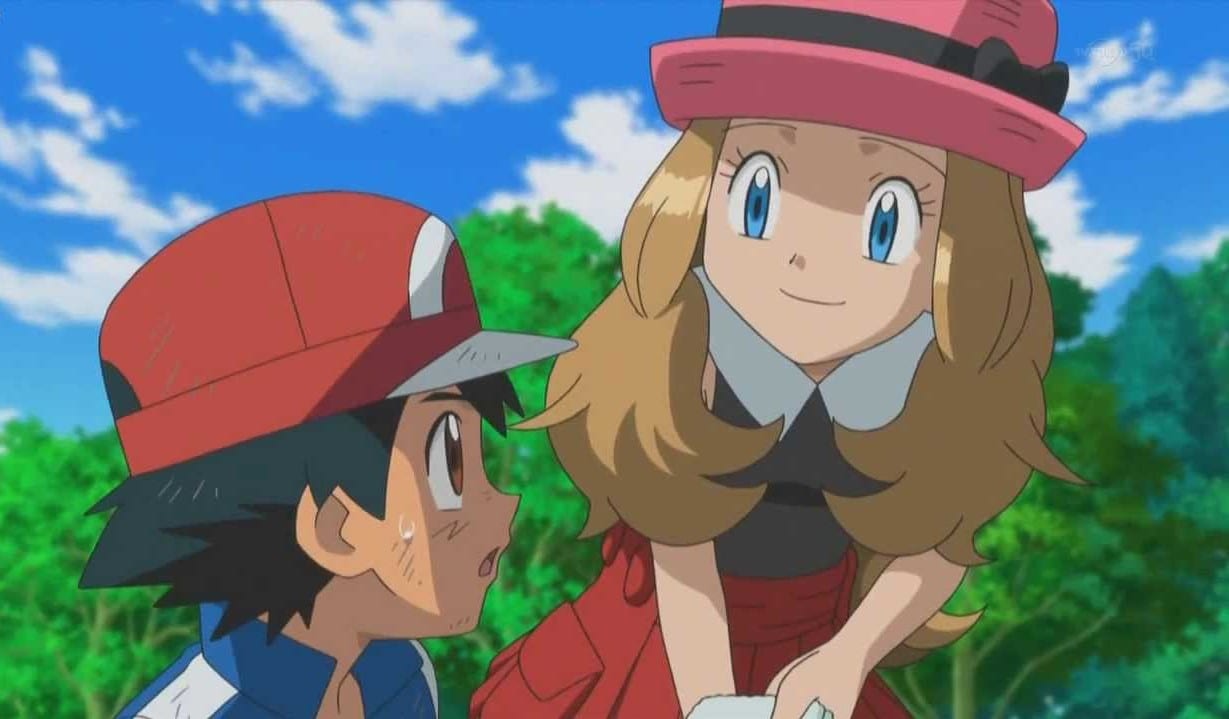 Ash Ketchum from Pallet Town is the protagonist of the Pokémon anime and undoubtedly the most famous human character in the whole franchise. He is a young Pokémon trainer from Pallet Town, who embarks on his journey with his partner, Pikachu. Throughout the series, Ash has had a lot of human companions on his journeys, both male and female. But, has he ever had a girlfriend or a romantic interest? If you ever wondered about that, you’ve come to the right place, because we have all the answers for you.

Ash Ketchum doesn’t officially have a girlfriend, but one of his traveling companions – Serena – is certainly his love interest. She definitely likes him and it is pretty clear that Ash likes her back.

Although he has seemingly not aged a day since his first day, Ash has changed a lot while traveling with Pikachu and his other friends; his companions changed as the seasons went by. He caught a lot of different Pokémon, he fought a lot of hard battles, he helped save the world on several occasions and he has appeared in all episodes of the anime and all the related anime movies.

Does Ash Ketchum have a girlfriend?

Technically speaking – no, he does not (unless you’re defining a girlfriend as a friend who is also a girl, then he has plenty). Ash has been through a lot of adventures with his Pokémon and has had a lot of different traveling companions. Some of them have become cornerstones of the franchise – like Brock, Misty, May, Dawn, Iris, and others – while others have had lesser impact on the series as a whole.

Despite the fact that a lot of his traveling companions have been female, Ash has never been officially in a relationship with any of them. Likewise, despite all the situations, most of them haven’t shown clear signs of being in love with Ash. Misty is one of the more obvious candidates, but despite all their situations, it’s more likely that her strong emotions towards Ash are of a friendly nature, just like May’s.

So, is there anyone significant in Ash’s life? Well – there is! But there is a catch…

Namely, we can definitely reiterate that Ash Ketchum doesn’t have a girlfriend. One of the reasons for that is that – in-continuity – Ash is still 10 (or 10-ish), which means that he is definitely way too young to have a serious relationship. Yes, yes, we’ve been following his adventures for two decades now, but just like the Simpson family children, Ash does not age or, if he does, he ages very, very slowly. But, despite this, we can ascertain that Ash definitely has a crush, i.e., someone he likes very much and luckily for all the fanboys and fangirls our there – she likes him back. They’re not a couple, but the nature of the Pokémon franchise gives us room to construct a potential future for the two of them.

If you started following Pokémon when you were a kid and grew up in the meantime, you probably don’t know who Serena is, since she wasn’t introduced in the first seasons of the anime, although(!) – as it turned out, she’s known Ash longer than any of his traveling companions throughout the anime! So, who is she?

Serena is a Pokémon Performer from Vaniville Town, who played a major role in the series as Ash’s traveling companion in the XY season of the anime. Although we have not seen her before this season, it turns out that she’s known Ash for years before joining him on his adventures.

Namely, as a young girl, Serena was sent to a summer camp organized by Professor Oak (Kanto’s Pokémon Professor). Ash attended that same camp. One day, Serena got lost in the woods and got slightly injured after being scared by a wild Poliwag. Ash, who was looking for that same Poliwag, found Serena and helped her. This is how they actually met, but the story was unknown to the viewers until the seventeenth season of the anime.

When Ash arrives in Luminose City, Serena recognizes him on television and wants to meet him, but soon finds out that he had already left the town. After choosing her Starter Pokémon (Fennekin), she started her own journey and soon met up with Ash. Ash didn’t initially remember her, but after a while – he remembered her as the “girl with the straw hat”. Serena would soon join Ash on his journeys.

The two of them shared a lot of adventures together and it was obvious that Serena had a strong crush on Ash. Due to their ages, the relationship was never fully explored, but it was pretty clear that Ash liked her too. This was the first time that Ash’s romantic life was, albeit superficially, explored in the anime.

What is the nature of their relationship?

As stated, Ash and Serena are not a couple. They are very good friends and they do have romantic feelings for each other, but the anime never actually made them a couple. It is important to note that Serena ultimately left Ash’s group and went to explore the Hoenn region, meaning that the anime might address their relationship at a later date. But for now, they remain in love with each other, but just friends.

The confirmation of their mutual feelings came in the episode “Till We Compete Again!”, in which Serena left the group and departed for Hoenn. While she was saying goodbye to Ash, Serena seemed to lean in and kiss Ash, which left both him and all the others shocked. The kiss was never actually shown on screen, but Serena’s action and the reactions of all the other characters imply that the kiss did indeed happen. This is proof of their emotions and the true nature of their (prospective) relationship.

And this is it for today. We have told you about Ash’s romantic feelings towards Serena and explained the nature of their relationship. We hope you found it interesting, and if you would like to find out more about Ash, follow ou link. See you next time, and don’t forget to follow us!