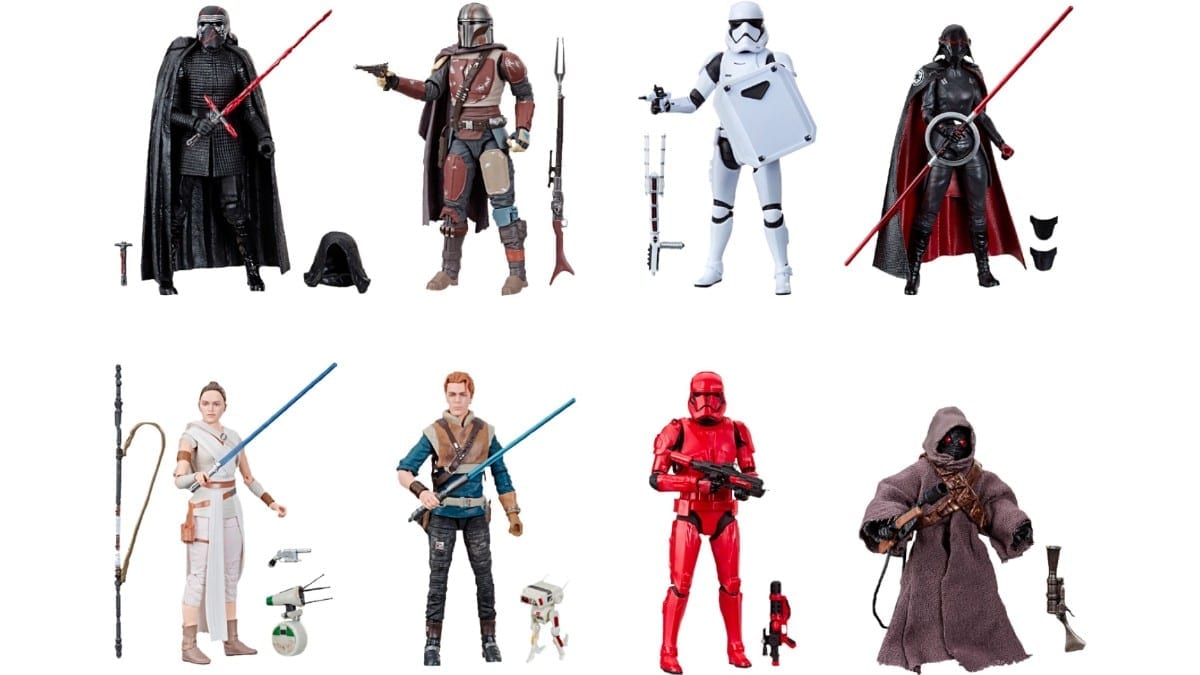 The Star Wars movie franchise is iconic and has a cult following across the world. So, it is but natural that the massive following will increase the demand for collectibles.

What is the Star Wars Black Series?

Star Wars the Black Series is a collection of six-inch action figures, first announced by Hasbro after being inspired by the company’s Marvel legend series. After Star Wars: The rise of Skywalker, Star Wars: The Force Awakens, and The Mandalorian, the line of toys was released to keep in tune with the hype from all the space opera fans. The Black Series allows you to relive all your sci-fi fantasies, biggest battles, and missions in the Star Wars saga through the collector figurines.

The Star Wars Black Series is not for the faint-hearted. If you’re a serious collector and an avid toy enthusiast then you will love the excellent details, high quality, and exceptional articulation. What more, the collection features your favorite heroes and villains from Luke Skywalker and Rey to Darth Vader and the Stormtroopers, we’re super excited just thinking about it.

These collectibles are dedicated to all the Star Wars fans that are looking for the perfect addition to their fantasy collection or looking to share it with their fellow Nefherders. Take a look at the Black series figurines and decide for yourself.

Is the Star Wars Black Collection worth collecting?

Yes, Star Wars has won millions of fans ever since it first hit theatres years ago and led to a whole generation falling in love with this fictional universe.

Many fans were just five-year-olds when they began collecting the figurines. It reminded them of a more nostalgic time not so long ago and an entire generation that they can connect with.

Several factors lead to dictate the Black Series collectible value, ranging from condition to rarity, series, whether they are loose or in the original packaging, and the variation.

Loose figures, if taken out from the original packaging and have gone through wear and tear, will not be worth collecting. However, collectible figures in stores or online platforms like the Jawa’s vinyl cape or Han Solo can be highly valued for their rarity.

When collecting, always go for figures that are rare and desired, but then again, many action figures mean different things to their collectors.

How many Black Series Star Wars figures are there?

The general rule for collectibles is that the scarcer they are, the more value they hold, and this certainly applied when it comes to the Black Series. The Black Series six-inch toy line made its debut on 1 August 2013 and included four characters, namely Luke Skywalker, Darth Maul, R2-D2, and a Sandtrooper.

As it grew, the line became so popular that many of the characters got sold out quickly and got harder to find. Despite the price point, it was well-received by dedicated fans.

The Star Wars Black Series showcased packaging with orange detailing and released in four waves between 2013 and 2020. The recent ones released this year were redesigned with different colored detailing.

While the 1980 vintage version may seem a little unappealing in comparison, the Black Series Bossk is created with a great amount of detail.

Right from being able to move his jaw to be able to talk back to the imperial officers. You won’t find another bounty hunter like this.

You can check out the Bossk

This Togruta female is a realistic collectible and like her character, it is 100% badass.

Right from her twin lightsabers to her wide range of motion and real-time looks, she is an iconic piece in the Black Series collection.

You can check out the Ahsoka Tano

Don’t let those small guns fool you, these Black Series Battle Droids were able to hide from the Jedi and have come directly from the first battle of Geonosis. They will not let anything stand in their way.

You can check out the Battle Droid

Hail to the general of the Galactic Empire’s Imperial Army. General Veers like his collectible is fierce and ready to lead you into battle.

This collectible is created using real face printing and looks so similar to the real character that you can’t tell them apart.

You can check out the General Veers

A princess and one of the greatest leaders of the rebel alliance, this fearless soul is the perfect addition to your collection.

You can check out Princess Leia

These humanoids hidden behind their rough, hand-woven robes tell a story of a fantasy world. We love how the figure captures the actual character so well.

You can check out Jawa

Employed by Jabba the Hutt, this is a Rodian bounty hunter. Greedo is one of our favorite collectibles.

You can check out Greedo

The first figure in the new Star Wars trilogy, Rey remains one of the best and most sought-after figure.

You can check out Rey

One of the most detailed creatures these guards will make an ideal addition to your dimly lit dungeons and underworld kingdoms. Be sure to buy at least a couple of them as they work better together.

You can check out Gamorrean Guard

Still excited? We saved the best for last. This new Hoth Rebel soldier is so new he’s flying right off the shelves as we speak. Made with life-time face features, he looks exactly like the real character.

You can check out Hoth Rebel Soldier

These Star Wars Black Series collectibles are one of the most startling examples of photo-real innovations. They are done using real face printing technology, with full features and accessories. Besides this, the collectibles also come with moving body parts including arms, legs, jaws, and more. For some, you can even remove the accessories.

You can get any character you want in the black series and each one is more advanced than the next. It also comes in a sleek black packaging which is compact, classy, and an improvement from the old one. Undoubtedly, the Star Wars Black Series is a real collector’s item.

How can you tell if Star Wars Black Series figures are fake?

If you’ve spent time researching all the Star Wars Black Series figures, you must have come across some fakes or rip-offs as well. So how can you tell the difference? Fake collectibles will be much lower in price. The amount of work that goes into creating a fake collectible is a quarter of what actually goes into making a real one.

Real collectibles are sold by the company and will always be a tad higher on the price. Always check and compare the prices of both. If you are still unsure, you can always head down to the retail websites and stores and always ask around.

Fake figure packaging will always differ from the real ones, you can spot color variation in the box if you compare and look closely. The box will be slightly discolored at the top of the shade may vary. Also, if fake, the design on the box will not be accurate. These are small changes and can easily go unnoticed. So, always make sure you double-check, especially if you are buying online.

Thirdly, if the box says Star Wals then you know for sure it’s fake. Another thing to look for is finishing. Small signs like a shoddy paint job, smaller accessories or uneven body parts, and even a fake logo will make it easier to stop. Some fake collectible manufacturers even forget to include certain accessories along with the product and this is something else to always look out for. The Star Wars Black Series fake collectibles will not match up to the real ones in small ways and it is up to you as a collector to decipher the difference.

Although many Star Wars fans feel that much will depend on the quality of the new merchandise, the Black Series has proved to be exceptional. The series features different color design details. For instance, Star Wars Rebels are purple, The Clone Wars is yellow, The Mandalorian is orange, Return of the Jedi is green, and The Empire Strikes Back comes in blue.

With high-quality constructed toys, a mix of interesting sci-fi characters, highly detailed accessories like lightsabers, blasters, and vehicles to settings straight out of a movie theatre they are appealing and valuable to the people who collect them. Remember to always research while picking characters. A lot of online websites and forums can be helpful while deciding which character to get or what kind of variety to buy.

Star Wars characters are quite valuable, especially vintage ones. Always be sure to keep your collectors’ item safe and secure and always keeping checking the package details and conditions before purchasing. With access to the best figures from the Star Wars Black Series, it is safe to say that these are exciting times to be a Star Wars fan.