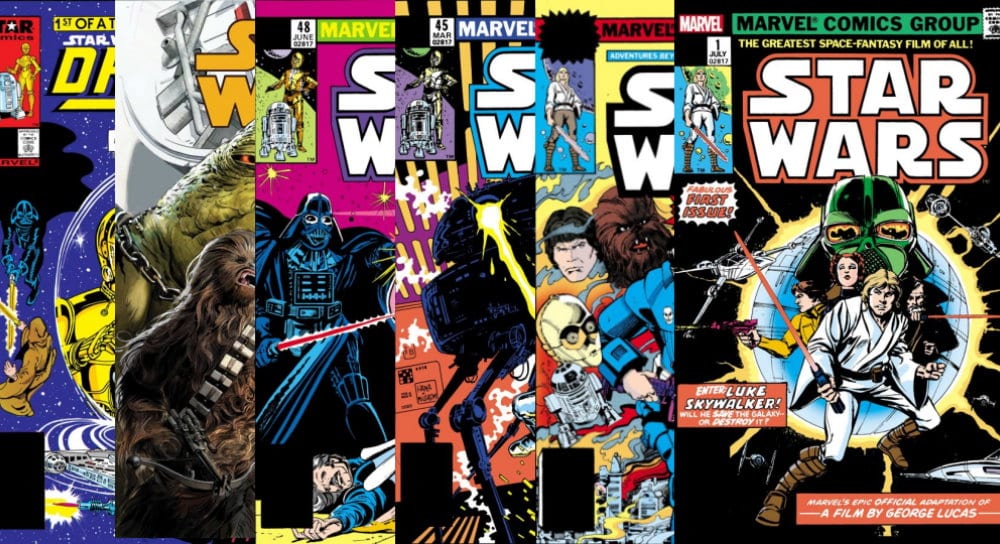 Although George Lucas’ Star Wars franchise is best known for its movies and television adaptations, it also consists of both novels and comic books, which form an essential part of the expanded universe, both before and after the acquisition of Lucasfilm by Disney. In this article, we are going to talk about the Star Wars comic books and give you the best reading order if you want to start.

There are two ways you can start reading Star Wars comics – by starting with the Legends universe or the Disney canon.

Now that we’ve gone through the intro, let us focus on the main topic of the article – the comics.

What most people around the world might not know is that the Star Wars comic books are as old as the movies, since Marvel Comics published a six-issue adaptation of the original Star Wars movie about the same time the movie came out. Due to various historical reasons, these comics have not been available worldwide at the time, but are important in explaining the history of the comic book series.

There is a total of seven phases in the history of Star Wars comics, as follows:

The Marvel series that started with the adaptation of the original movie ran for a total of 107 issues and three Annuals until 1986 and featured stories set between the films of the original trilogy, but also adaptations of The Empire Strikes Back and Return of the Jedi, the second and third instalments in the original franchise. From 1985 to 1987, Marvel Comics published two short-lived series based on the Star Wars animated series Droids and Ewoks, concluding its run with the franchise in 1987. Briefly, the publishing rights went to Blackthorne Publishing, which released a three-issue run of 3-D comics from 1987 to 1988. Then, three years later, the publishing rights for the Star Wars comics were acquired by Dark Horse Comics, who published the limited series Dark Empire in 1991 and ultimately produced over 100 Star Wars titles until 2014.

Following the now famous October 2012 acquisition of Lucasfilm by The Walt Disney Company, in January 2014, it was announced that the publishing rights for the Star Wars return to Marvel Comics starting from 2015 (Disney having previously purchased Marvel Entertainment and the Marvel Comics brand and publishing in 2009). In April 2014, Lucasfilm rebranded the majority of the Star Wars Expanded Universe as Legends, only keeping the theatrical Skywalker saga and the 2008 Clone Wars theatrical film and television series as canon. Most media released since then is considered part of the same canon, including comics.

How to read Star Wars comics?

Had you asked us this question 10 years ago, we would’ve given you a simple, straightforward answer. Today, the answer is still relatively straightforward, but it’s not that simple, all because of the above-mentioned acquisition of Lucasfilm by Disney.

When Disney took over Star Wars, it practically annulled the canon status of the former expanded universe, now known as Legends, keeping only the movies and the related television series within the official canon.

The Legends universe played and still generally does play an important part in the franchise, despite Disney trying to make its own continuity with the new comics and books. True fans will never disregard the original expanded universe, which is what makes the answer a bit complicated.

Namely, the Legends universe is essential to understanding a lot of the characters and events from the movies, but it’s officially not part of the current canon. Yet, its former canon status gives the whole brand a very important role in the franchise, which is why the titles from the Legends brand cannot be ignored. As for the canon comics, these are currently just the ones published after 2015, which we are also going to talk about in the article.

What you need to know is that most Star Wars comics are stand-alone stories and, although there are some sequels, prequels and tie-ins, you won’t have to know much of the comic book lore enjoy the titles as we’re going to present them to you.

This is why our article will have two lists, or guides, one for the Legends brand and one for the current Disney-operated canon.

The best reading order of the Legends universe is based on the periods the comics are exploring. This is why we have decided to split our guide into several periods, each of which explores a different history of the Star Wars franchise.

These comic books explore the oldest period of the franchise, dating roughly 35,000 years before the establishment of the Galactic Republic. Most of these comics explore the origin of the Jedi, which is why the most important title from this period is titles Dawn of the Jedi. There are three important storylines within this series – “Force Storm” (#1-5), “Prisoner of Bogan” (#1-5) and “Force War” (#1-5) – all of which are seminal in understanding the initial phase of the franchise.

Rise of the Empire

This very large period is actually a prequel to the Prequel Trilogy, but also includes storylines from that period that expand the original movies. This period contains a lot of material, so be ready to do a lot of reading if you’re intent on exploring the whole series. These stories can be divided into three groups:

The Rebellion Era continues where the previous era left of, chronicling the events in the franchise until after the Return of the Jedi. This era and all the ones that follow are actually very complicated to read because they follow a completely different post-Return of the Jedi chronology than was actually established by Disney. This is why most of these titles aren’t actually canon today, because Disney decided to follow its own path with the Star Wars movies and established a different canon continuity in its comic books. This is why all these titles became part of the Legends universe, rather than the canon expanded universe. The Rebellion Era encompasses a total of four periods and a special series entitled X-Wing Rogue Squadron (#1-35 + one Speical). The groups are as follows:

As we’ve stated, these and all the following comics follow a narrative that is immensely different from the current canon as established by Disney. The authors had a lot more liberty with the storylines, so practically everything that happened in them is not canon and – officially – it never happened in the universe. This era, which is set cca. 5 years after the Return of the Jedi and lasts for an additional 20 years, has three distinct subgroups:

This is a relatively short era, set 25 years after the Original Trilogy and mostly involving the Yuuzhan Vong War. The original story was published in Chewbacca (#1-4) and a story from Star Wars Tales #18. The second period within this era deals with the Yuuzhan Vong War directly and was published in the Invasion trilogy, consisting of the storylines “Refugees” (#1-5), “Rescues” (#1-6) and “Revelations” (#1-6), with an additional story from Star Wars Tales #21.

The Legacy Era is set in the distant future, more than 130 years after the Original Trilogy. It follows a set of completely new characters and stories, one of them being Cade Skywalker. The stories from this era were published in the main series comic Legacy (#0-27, 32-50), but also in the Legacy: War (#1-6) comic book as well as the 2013’s Legacy (#1-18) series.

The Vector Crossover isn’t actually a separate series or continuity, but rather a crossover that spans many eras throughout the four Star Wars comics that were being published at the time at Dark Horse Comics. Due to their specific nature, they are usually separated from the rest of the comics and include the following titles:

We’ve already told you what happened with the expanded universe when Disney took over Lucasfilm and the Star Wars franchise. The comics reverted back to Marvel in 2015 and everything published after that is considered canon, although these stories still don’t have the reputation of the Legends stories listed above.

The stories from this canon aren’t really systematised as the Legends universe, so we are just going to bring you a list of the titles and issues based on the period they are set in, referring to the movies as a starting point. So, the reading order would be as follows: