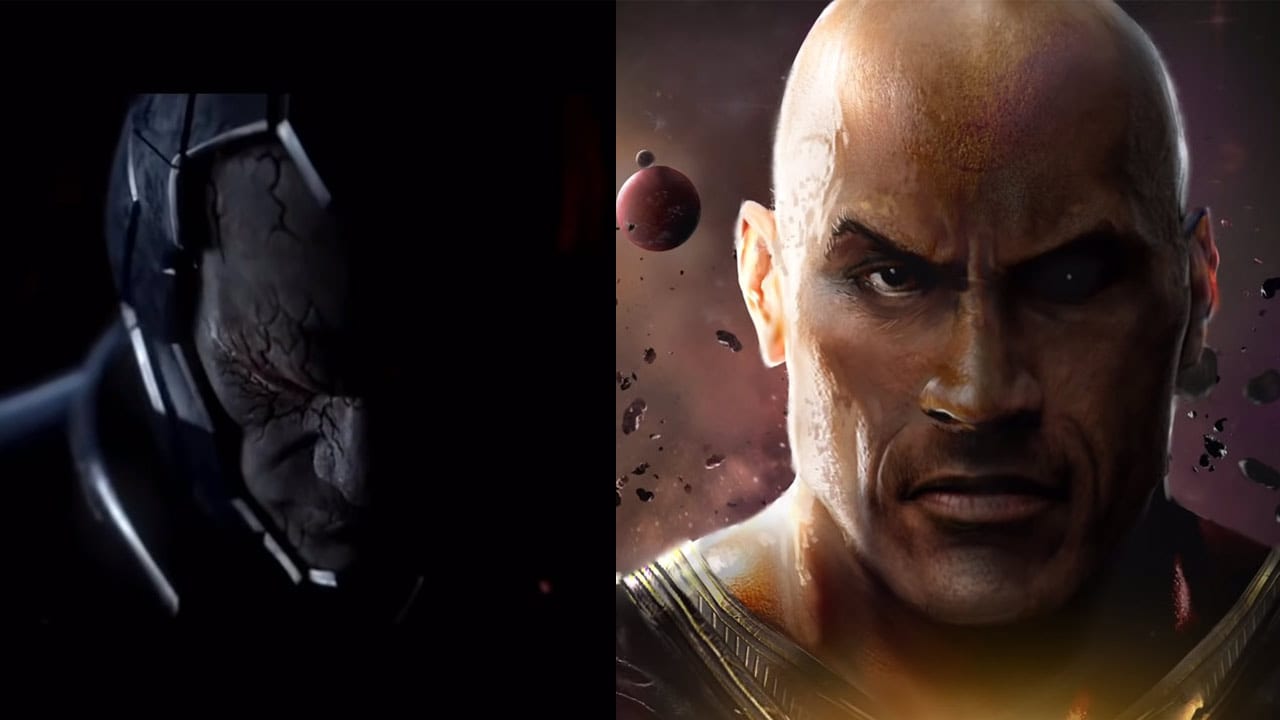 Black Adam and Darkseid are not like the street-thugs we usually see Superheroes fight. They don’t operate on such a low level.

On one hand, we have Black Adam, who possesses the same powers as Shazam. After he was given the superpowers from ancient Egyptian gods, he showed his true colors and vowed to destroy Shazam.

On the other hand, we have Darkseid. He is not from Earth. He is the ruler of the planet Apokolips. He has a strong urge to conquer the entire universe. Furthermore, he is the leader of a large army.  What will happen if they both got into a fight? Who would win? Or will we have a winner? Let us find out in this blog titled ”Black Adam Vs Darkseid: Who Would Win”.

How Powerful Is Black Adam

Black Adam is a fictional supervillain in the DC comics universe. It was developed by Otto Binder and C.C Beck. Black Adam is the archenemy of Captain Marvel or Shazam as he was reintroduced by DC comics (Whiz Comics #2, 1940) after they acquired the rights from Fawcett Comics.

Black Adam was first introduced in the comic The Marvel Family, which was published by Fawcett Comics back in December 1945. After DC Comics acquired the rights from
Fawcett Comics to use all their superhero characters, Black Adam started appearing more and more.

Black Adam receives his motive from the burning urge to besmirch the reputation of Captain Marvel. As much as he wanted to acquire more and more strength, he was equally driven by the thought of ruining Captain Marvel.

We see Black Adam in many DC comics in the 21st century. Some of the most popular comics with Black Adam in it are Justice Society of America, Villains United, Infinite Crisis, and many more.

If things go well, we will soon get to see Dwayne the Rock Johnson playing this anti-hero character sometime shortly. Directed by Jaume Collet-Serra, the movie titled “Black Adam” is expected to hit the movie theatres in December of 2021.

Black Adam or also known as Teth-Adam, who was a slave in Egypt. He made acquaintance with Shazam. And Shazam was quickly mesmerized with his charm. Shazam was gullible enough to assume that Teth-Adam had very strong morality. But he later finds out, that it was all staged.

So why did Teth-Adam try to impress Shazam? Well, he was aware of the fact that Shazam possessed many superpowers, and that he was looking for an heir. So, the morality the Black Adam portrayed as having, was all a façade. This story was first introduced in the comic book Marvel Family #1, and later reinforced after DC acquisition in Shamaz #8 published back in 1973.

Just like Shazam, when Black Adam says the words Shazam, he is transformed into the super-strong Black Adam. In the original comics, his powers derived from the Greco-Roman deities. However, later it was changed to ancient Egyptian deities.

After Black Adam realizes the sheer amount of superpowers he possesses, he lets it overwhelmed it. He soon sets his eyes on the Egyptian throne and overthrows the pharaoh. When Shazam got to know about it, he first tried to take back his powers, but he failed. Later Shazam banished Black Adam to a distant star, far away from Earth.

How Powerful Is Darkseid

Darkseid is another DC supervillain. It was developed by Jack Kirby. Before its first official debut, Darkseid was seen in the comic book Superman’s Pal Jimmy Olsen #134, which was published back in November of 1970.

Darkseid was officially introduced to the comic lovers in the comic Forever People #1, which came out in February of 1971.

There is a major difference between Darkseid and other supervillains in the DC universe. Darkseid is an actual conqueror. He is the dictator of the planet Apokolips. On his planet, he is the ruler, who is worshiped as a god. He doesn’t allow free will for his people. And this is exactly what he wants for the other planets. His ultimate goal is to expand his empire, conquer more planets, and kill the freedom, and free-will of people.

He is undoubtedly one of the most powerful villains in the DC universe. He is an archenemy of both Superman and the Justice League. According to Wizard magazine, he was ranked the 23rd greatest villain of all time.

He appeared as the main antagonist in the popular TV series Smallville. Moreover, he has also made several appearances in the DC animated universe such as Superman/Batman: Apocalypse. Along with fighting Superman, in these animated movies, Darkseid also fights Batman and every other member of the Justice League.

Darkseid is the youngest son of King Yuga Khan, and Queen Heggra, the rulers of Apokolips. Before getting the name Darkseid, he was referred to as Prince Uxas. He was second in line to the throne, just after his elder brother Drax.

When Prince Uxas detected that his brother was trying to claim the divine Omega force, he plotted to kill him, and he did. After killing his brother, he took the power for himself. To his surprise, right after he took over the power, his body transformed into a rock-like structure. Much like Hulk, and The Thing.

Darkseid heart grew colder after the death of his beloved wife Suli. She was an Apokoliptian scientist, and sorceress. Darkseid fell in love with her and soon married her. They soon had a boy named Kalibak.

However, his mother Heggra plotted against them and poisoned Suli. She justified her actions by saying Suli was manipulating her son Prince Uxas. Upon learning this, Darkseid killed his mother. This made him the unrivaled ruler of the planet of Apokolips.

In the Great Darkness Saga, we see Darkseid was almost forgotten. It has been almost a thousand years since someone saw Darkseid, but all of them knew he was out there somewhere. And he indeed appears. By that time, he has already conquered the magical lands of Daxam.

Using science, he puts Daxam right beneath a yellow sun, much like the one we have here in our solar system. This transforms every inhabitant of Daxam to develop superpowers like superman. His motive behind this was to form a large army, which he can use to expand his empire, and take over more and more planets.

Black Adam Vs Darkseid: Who Would Win

To assess in a fight between Black Adam, and Darkseid who would win, let us compare them on different aspects.

Both Darkseid and Black Adam are merciless. They don’t have sympathy, and compassion for anyone. They will kill millions if that is what it takes to reach their goal. But they have many differences too. So one point for both.

First let us see which legendary figures they have fought, and what are their other accomplishments.

Black Adam has got into fights with Teen Titans, JLA, JSA, and defeated his enemies every time. Also, even though Black Adam was unable to beat Ultraman, he did make him bleed. That is a remarkable feat itself. So one point for him.

Darkseid has something Black Adam does not, and that is his Omega powers. He can shoot Omega beams that can destroy entire planets. One point to Darkseid.

Another area where Darkseid takes the lead is, he has a huge army. This gives him the flexibility to conquer different planets, and colonize it. Also, if push comes to shove, he can even command his army to fight an enemy for himself, for example, Black Adam. If that happens, Black Adams will be going against millions of Damax inhabitants who were biologically tweaked to have similar superpowers as Superman. So another point to Darkseid.

So far, both Darkseid and Black Adam have three points to their names.

Darkseid possesses many other superhuman powers. On such unique superpower is the ability to take on different avatars. He can transform his body into a shape that increases his chances of winning a battle. So another point to him.

One major difference between Darkseid and Black Adam is, even though Black Adam gets his superpowers from Egyptian gods, he is a mortal. On the other hand, Darkseid is immortal.

Darkseid has the ability to use his mind to control physical objects. He can make an object move at this will, and use them as a projectile and do serious damage. Moreover, this ability is also applicable when trying to manipulate the thoughts a person is having.

Darkseid has the ability of telepathy, telekinesis, mind control, energy manipulation, super stamina, psionic possession, size manipulation, and so on. The list goes on.

So, in a nutshell, Black Adam is no match for Darkseid.

Check out this cool figure toys of Black Adam and Darkseid at Amazon.com!