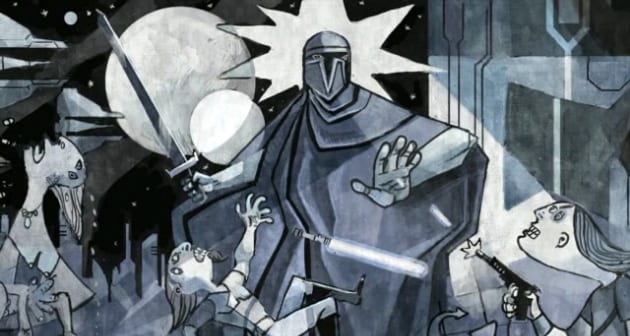 Yes, a Mandalorian can indeed kill a Jedi. This has been proven on several occasions within the Legends universe and is a fact, although the Jedi are generally more skilled than the Mandalorians.

Who are the Jedi?

The Jedi – represented by the Jedi Order – are a noble religious group devoted to the Light Side of the Force. They are one of the two main fractions within the Star Wars universe, the other one being the Sith, who were aligned with the Dark Side of the Force. The leader of the Jedi is the Grand Master (the last Grand Master before their first collapse was Yoda) and the Order is led by the Jedi High Council.

The Jedi have a have a very long – several thousand years – history and have been known as the protectors of justice and peace in the Galactic Republic. Although primarily a religious order, the Jedi Order was used as a defense corps during the Old Republic and before the creation of the Galactic Empire. The Order itself was founded by Ahch-To somewhere in the Unknown Regions, but the Jedi Temple was for years located on Coruscant.

The Jedi fought in numerous conflicts and wars in the Galaxy, wanting to end local conflicts and restore piece. Among their most famous wars are the one against the Mandalorians and the Sith Order, a fraction of the same religion that relied on the powers the Dark Side of the Force had to offer. The Sith are the biggest rivals of the Jedi and the two groups generally wanted to destroy each other, with the Jedi being more rational in the conflict, while the Sith were just bloodthirsty.

The Jedi Order plays an essential role in the development and evolution of George Lucas’ franchise. Their key role in all three movie trilogies was enormous, even after the initial Jedi Order was annihilated and a new one established by Luke Skywalker. They are present in all derivative media and have been the topic of a large number of Star Wars Legends stories.

Can a Mandalorian kill a Jedi?

The conflict was not waged because of ideological differences between the Mandalorians and the Jedi, but rather because the Jedi Order protected the Old Republic and the Mandalorians waged war against the Republic. Initially, the Jedi were more successful due to having lightsabers and being Force users, but the Mandalorians quickly upgraded and adapted their technology (armours and weapons) to fight the Jedi and were often successful. Although the war did end in the almost complete destruction of Mandalore – with the Jedi winning – we can safely say that a Mandalorian can kill a Jedi because it happened before on several instances.

A Jedi has a better staring position, that much is obvious, but with good preparation and the right equipment (a good lightsaber-proof Beskar armour), a Mandalorian – who is better in hand-to-hand combat – could certainly defeat a Jedi.

This covers our topic of the day. We’ve given you plenty of information related to one aspect of the relationship between the Mandalorians and the Jedi. We hope we’ve been helpful and you’ll keep following us for more! See you next time!