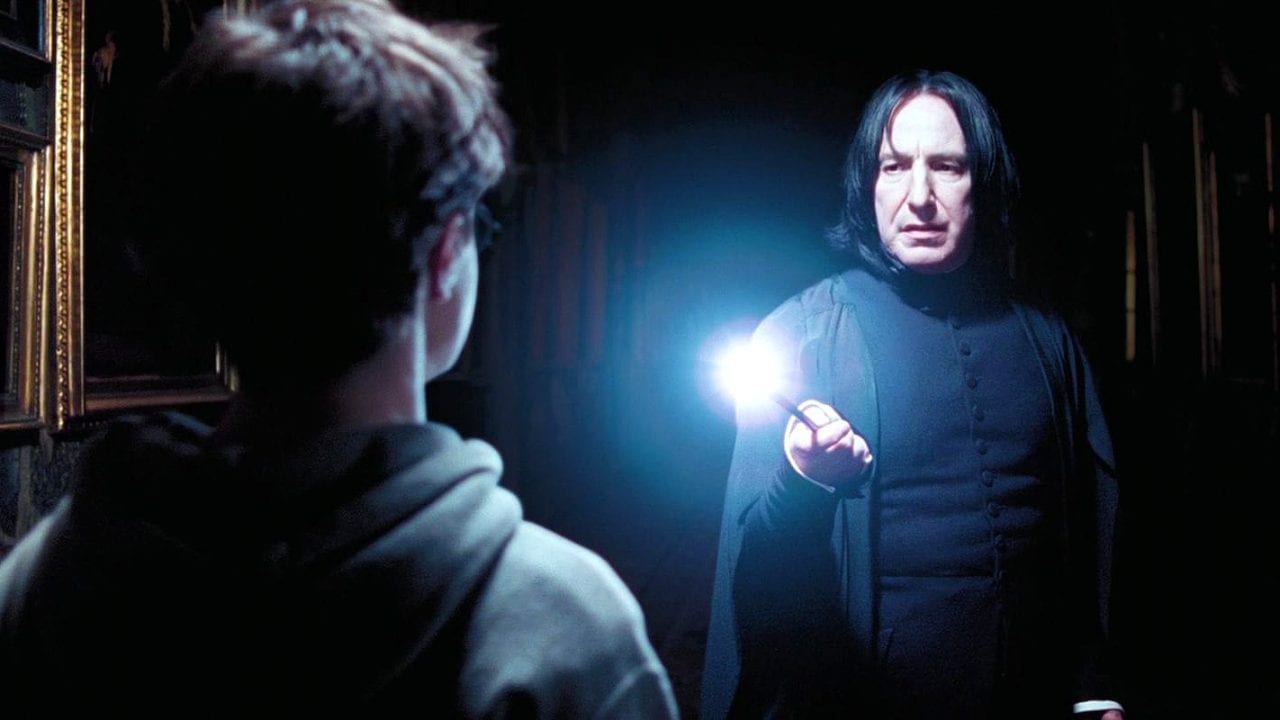 When the name of Professor Severus Snape comes out, we’ll always have two different opinions, good and bad one. But both of them agree that he is the most impressive character of the Harry Potter series.

Let’s not fool ourselves: Snape’s tears at the end of the book/movie don’t mean that Severus Snape ever loved Harry Potter. Harry’s mother was Severus’ great unrequited love, and that was the only reason for his emotional attachment to the little future wizard.

Keep reading to find out more about a man who’s named suited him.

Who is hiding behind the character of Professor Severus Snape?

Analyzing his first name, which is derived from the Latin word “sĕvērus”, you’ll get several meanings of it, as severe, serious, strict, inflexible, stern, hard, etc.

Severus Snape very well fits into all of these categories, and more. When we imagine his character, whether we have seen the movies or just read the books, we would definitely describe him as such.

He didn’t have an easy childhood and was a victim of neglect when it came to his parents, particularly during his studies at Hogwarts. As the son of a witch mother Eileen Prince and a muggle Tobias Snape, he was always a regular victim of his colleagues due to being half-blooded.

Having “mixed” parents was something frowned upon, as both Voldemort and Grindelwald did not care for muggles. It was a part of the philosophy claiming muggles are inferior to wizards and witches.

Sirius Black, Harry’s godfather, and James Potter, Harry’s father, frequently abused Snape because of his looks by calling him “a thin man with sallow skin, a large, hooked nose, and yellow, uneven teeth” but especially because of his half-blooded origin.

Snape also invented several spells, one of which James Potter used to turn him upside down in the air. All this abuse and neglect must have had something to do with his insecurities later in life and his cold nature. But should we call him evil at this point?

The main reason for Snape’s dislike for Harry Potter lies in Lily Evans, towards whom he nurtured special feelings, while she perceived him exclusively as a friend. Unfortunately, she fell in love with James Potter, a very popular student at the time whom she met when they were both sorted into Gryffindor, while Snape went on his own path of Slytherin.

Becoming insecure and vulnerable, Severus decided to join the Death Eaters, thinking it would impress Lily. But, he was wrong.

In the meantime, the little wizard with the lightning scar on his forehead, grew carefree (well, considering his aunt, uncle, and Dudley Dursley not so much…) not knowing what awaited him in the future.

Harry’s future was already pretty much determined by his origins – his parents James Potter and Lily Evans, both wizards (even if Lily’s parents were Muggles). When he was just a 1- year – old boy, he managed to survive Lord Voldemort’s attack. His parents weren’t that lucky.

Coming at Hogwarts at the age of 11, the sorting hat let him become a member of the Gryffindor, one of the four houses of Hogwarts School of Witchcraft and Wizardry. Harry slowly stood out as one of the most gifted students and who, along with a few friends, also acquired a large number of enemies.

The young wizard thought he might even be happy in his new environment until he met Him – The Potions master, Professor Severus Snape.

When they first met, it was clear enough, that Harry had acquired his first enemy.

“Potter! What would I get if I added powdered root of asphodel to an infusion of wormwood?” – these are the first words Snape ever told Harry, filled with hatred and mockery.

A very interesting thing came from one of the series fans, who tried to reveal what was the meaning of those words. According to him, this is the explanation:

“According to Victorian flower language, asphodel is a type of lily meaning ‘my regrets follow you to the grave’ and wormwood means ‘absence’ and also typically symbolizes bitter sorrow. If you combined that, Snape’s words mean “I bitterly regret Lily’s death.”

Heartbreaking, don’t you think? But, Snape’s behavior according to his student, was everything but emotional. Snape always knew how to stay calm and collected towards Harry. Well, at least until Harry unlocked his past memories.

The relationship between Harry Potter and Severus Snape

Professor Snape never missed an opportunity to insult or punish Harry or his colleagues. “You are like your father: lazy, arrogant, and weak.”

Yes, how could you feel different when this “Father” took away the person who has meant to be your whole life. However, Snape never really built a relationship with Harry, but rather only had his own perception of Harry and a created relationship in the shadows.

Harry finally found out what was going on between Professor Snape and his parents. A woman who stood up for his best friend, when he was being bullied by James Potter, was his mother Lily.

However, Snape was so pitifully humiliated, calling Lily a “filthy Mudblood”, and that was the end of that beautiful, yet bitter-sweet friendship.

Afterward, Snape had the right to choose which part to take and what kind of man he would become. Unfortunately, he joined the Death Eaters, followers of the “one who cannot be named”.

It is up to you to decide whether he did it because of jealousy, envy, regrets? Or maybe he had just given up on all that was good in the world.

The only good thing that came out of Lily’s death was Snape’s joining the Order of the Phoenix and becoming sort of Dumbledore’s double agent.

As Dumbledore knows Harry’s emotional side and vulnerability, he needs to find out how to prevent Lord Voldemort from having access to Harry’s mind.

The headmaster of Hogwarts was the only one who asked Professor Snape to help Harry, particularly in Occlumency – the “magical defense of the mind against external penetration”, as Snape used to call it.

Although Harry had not progressed too much under Snape’s guidance, the Occlumency classes were the only time the two of them didn’t hate each other.

Alan Rickman after all this time? Always!

You may not fully agree with our opinion of Professor Severus Snape’s character, but what almost all fans of this series (and even those who aren’t) will tell you – without Alan Rickman, Severus Snape wouldn’t be as powerful as he was.

According to MTV News poll

conducted among fans, Professor Severus Snape has named the best character of all time in the Harry Potter series. We are sure the credit belongs to Mr. Rickman.

Rickman himself admitted his frustration with the role of the series’ antihero. He even wanted to quit filming the sequels, after Harry Potter and the Chamber of Secrets, but J. K. Rowling explained to him what lies behind the magic word “Always”. So, he stayed.

However, Ms. Rowling pointed out his hard work commitment which contributed to the success of the series around the world. Even the producer of the series, David Heyman, didn’t remain indifferent with his performance:

“I know, at times, you are frustrated but please know that you are an integral part of the films. And you are brilliant.”

Thanked Rickman’s role as a naughty professor, Snape became one of the most iconic and memorable characters of the books/films. And this is about what critics and fans both agree.

Considering all this, we’ll take Professor Severus Snape, not as a strictly negative person, but more like a man whose coldly bitterness and controlled exterior conceal deep emotions and anguish.

He is the most complex character, with a tendency to be positive at the very end of the series, and not just a bitter, sarcastic and frustrated man from the beginning.

We are still thinking Professor Severus Snape didn’t love Harry Potter, for many reasons. When he looked at him, he saw his worst enemy and rivalry, James Potter – in every move, his posture, his hair…

But Harry had his mother’s eyes.

Despite his bitterness and jealousy, what remains was the everlasting sparkle of eternal love for his dearest and unregretted Lily. She was his happiest memory.

If Lily had survived, who knows in what direction his character would have developed. Trust us, we prefer the first one, no matter what.

One of the most famous Rickman’s quotes going viral (even if it is found out he never said it) was this one:

“When I’m 80 years old and sitting in my rocking chair, I’ll be reading Harry Potter. And my family will say to me, ‘After all this time?’ And I will say, ‘Always.‘”

At last, you can make your own opinion about this special relationship of two famous wizards, or simply agree with us. No opinion would be wrong at all.