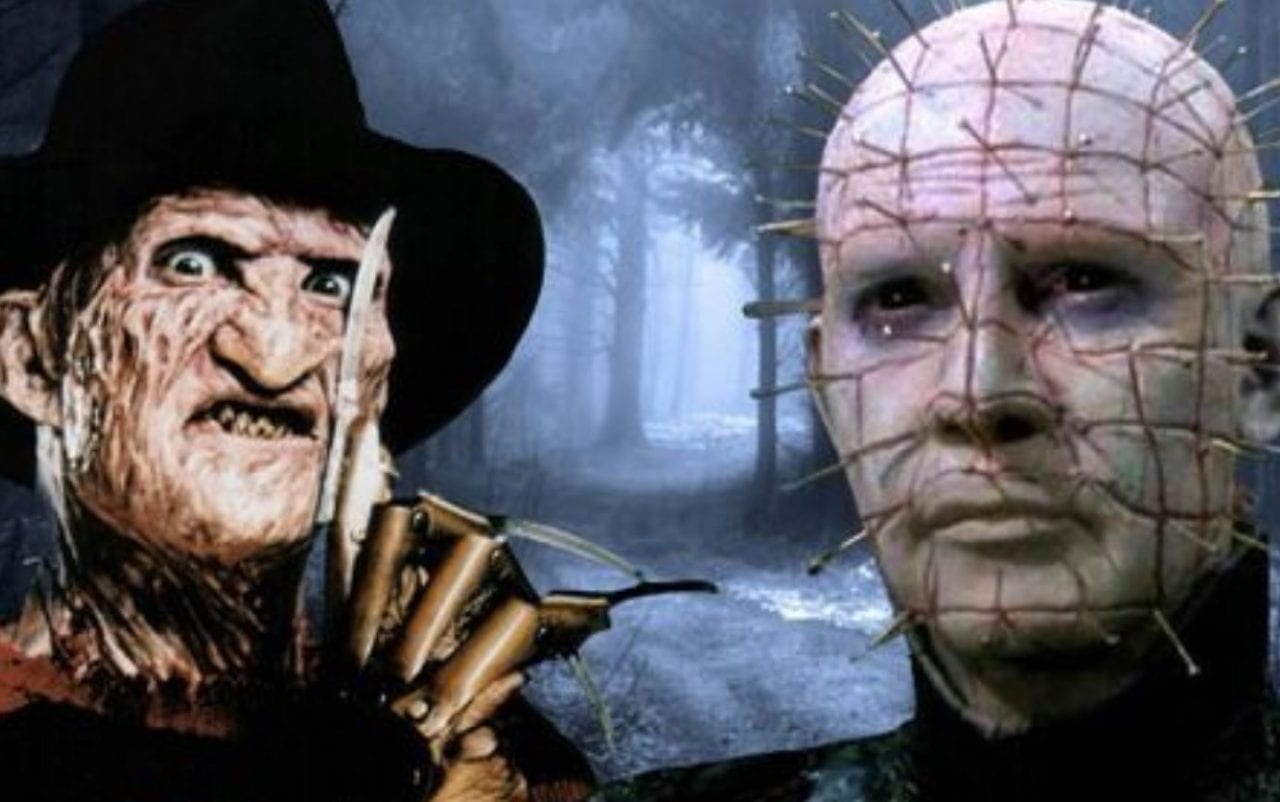 Freddy Krueger is one of the most popular characters in the horror genre. He is known to many as an urban legend, the murderous antagonist of the famous slasher films A Nightmare on Elm Street, which developed into a five-film series. Meanwhile, Pinhead, also known as The Hell Priest from the Hellraiser franchise, began life as a human named Elliot Spencer in Victorian England. These two characters exist in different universes. However, in May 2020, a fan-made trailer of Freddy vs Pinhead was released (also taken down), prompting the excitement of horror genre lovers all over the world and initiating the debate – who would win?

Both villains would come prepared with their specific skills and powers. However, when choosing between Freddy Krueger the nightmare murderer, and Pinhead the killer from Hell, Freddy would win the fight.

Crossovers are commonly anticipated within the horror/slasher genre. One of the most successful examples of this is Freddy vs Jason, which was an intersection of A Nightmare on Elm Street and Friday the 13th. Before the film’s release in 2003, several possible endings had been discussed for it, one of which involved Freddy Krueger and Jason Voorhees being stuck in Hell, where Pinhead is. This may be a possible jumping point to the Freddy vs Pinhead concept. To decide how each killer would fare against each other, let’s have a look at how each of them has individually racked up victims.

How strong is Freddy?

You would think that the metal claw gloves and burned face would be enough to scare anyone away, but Freddy Krueger’s power lies in his ability to visit his victims in the dream world when they are at their most vulnerable. He can make whatever happens in their nightmares happen in the real world, which means his victims must be careful not to fall asleep.

In the first installation of the Elm Street series, we see Freddy introduced as he approaches his first victim Tina (above). His arms are elongated to an inhuman length and his claws are bared as he attacks the young girl, which indicates some ability to alter himself physically. Later we discover that Freddy is tormenting Tina in her dream. In the real world, Tina’s body is slashed and then dragged around her room as if by some unseen force.

Tina isn’t the only person to fall victim to Freddy. The child killer also traumatized teenager Nancy Thompson by murdering her boyfriend Glen Lantz (below), who was innocently falling asleep as he was watching TV in bed. Freddy’s arms, with his claw gloves, reach around Glen’s body from inside the bed and drags Glen into a giant hole that opens up in the middle of it. As if that wasn’t enough, a spray of blood explodes from within the hole, enveloping the ceiling and indicating that Freddy had drained Glen clean.

A Nightmare on Elm Street 2: Freddy’s Revenge (1985) only finds Krueger’s victims in a more unfortunate position. The movie sees Freddy setting out to possess the body of a young boy named Jesse Walsh in order to exact his vengeance. This shows that Freddy’s ability to influence the real world is not only limited to manipulating dreams; he is also able to use a mortal body to manifest himself in real life. Using Jesse’s body, Freddy slaughters Schneider the gym teacher, Ron Grady the fellow student, and six other unassuming kids at a pool party.

Freddy’s morbid prowess extends beyond gore, as evident in the franchise’s third installation A Nightmare on Elm Street 3: Dream Warriors (1987). In an infamously scary scene, we see Freddy actually shapeshift, appearing as a giant slimy worm instead of his usual human-like self. However, this film also reveals that Freddy is not entirely undefeatable, as one of the children he tries to torment named Kristen has a special ability to draw other people into her dreams to help her.

Additionally, in the 2003 crossover Freddy vs. Jason, Freddy fights his first nemesis Jason Voorhees and displays ability in telekinesis as he launches swords and metals at Jason with his mind. He also picks Jason up like a pinball and flings him around against poles in one final battle. However, the question of which party won is still debatable, as Freddy did not manage to decapitate Jason’s head but was also not fully defeated either.

How strong is Pinhead?

While Krueger resides between dreams and reality, Pinhead resides between Hell and the real world. Before he became The Hell Priest himself, Pinhead lived life as Elliot Spencer. He served as a Captain leading the British army during World War I, where he practiced his leadership before becoming a Cenobite and leading his own Cenobite army (below).

Pinhead works for Leviathan, the overlord who rules all Cenobites. Under Leviathan, he is immortal, ageless, and possesses supernatural powers. He has the ability to resurrect his victims as Cenobites and increase the power of his army.

He is also most notoriously known for his ability to conjure chains, seemingly out of thin air, and control them through telekinesis. These chains have hooks at the end of them. In this instance, his victims are rendered helpless, as seen in one of the scenes in Hellbound: Hellraiser II (1988). Here, Pinhead punishes Frank Cotton, who comes into possession of the Lament Configuration and tries to escape Hell. Chain hooks clung onto Frank’s body and stretched his skin apart until he was torn to scraps.

The Hell Priest also has the ability to teleport as well as manipulate reality by disguising himself as other people. In Hellraiser III: Hell on Earth (1992), Pinhead is trapped when the Lament Configuration falls in the hands of a young woman named Joey Summerskill, who learns of his evil powers and is set on sending him back to Hell. In order to get the puzzle box back, Pinhead disguises himself as Joey’s father and manipulates her into giving him the box.

Despite being seemingly indestructible, Pinhead’s one weakness is actually the thing that summoned him in the first place. The Lament Configuration can be used to send him back to Hell, and this is the one thing keeping him in power.

Who would win, Freddy or Pinhead?

Evidently, Freddy Krueger and Pinhead make for worthy opponents. It’s a close call whether one can win over the other. Both villains are capable of inflicting great pain in their victims, and both are clearly not afraid to kill.

In terms of approach to their victims, Krueger is more innovative. We see this in the different ways he attacks the people he preys on. His success rate is also very high as he manages to harm almost every person he comes after. Meanwhile, Pinhead’s method of pulling apart his victims with chain hooks may get old after a while, but it is also a technique proven to be effective and bring a favorable outcome.

When it comes to powers, these villains have similar capabilities. Both have telekinetic abilities and can disguise themselves as other beings. They both have a foot in the real world and the other foot in another realm. The difference only lies in the fact Freddy’s successes are arguably more organic. They have almost always been credited to his claw gloves and his ability to manifest in people’s dreams, while Pinhead is as powerful as he is because he is a deity and has been granted that power by Leviathan. It can be argued that this is an unfair advantage on Pinhead’s part.

Finally, the antagonists both have weaknesses of their own. However, despite Pinhead being immortal, he has a very tangible weak point. His existence is threatened when the Lament Configuration falls into the wrong hands. On the other hand, Freddy’s potential preys have access to defeat him in his own turf.

Taking all of this into consideration, it’s safe to say that in a Freddy vs Pinhead fight, Freddy Krueger will come out the victor. He is constantly coming up with new ways to get inside his victim’s head, and every attack is tailored specifically to them, which provides the kind of psychological terror that Pinhead may not be able to. Despite Pinhead’s immortality under Leviathan, his entire existence can still be reversed depending on whoever has possession of the Lament Configuration. While he may be a Cenobite, there is no proof that he can match Freddy Krueger’s bloodthirst and wit.