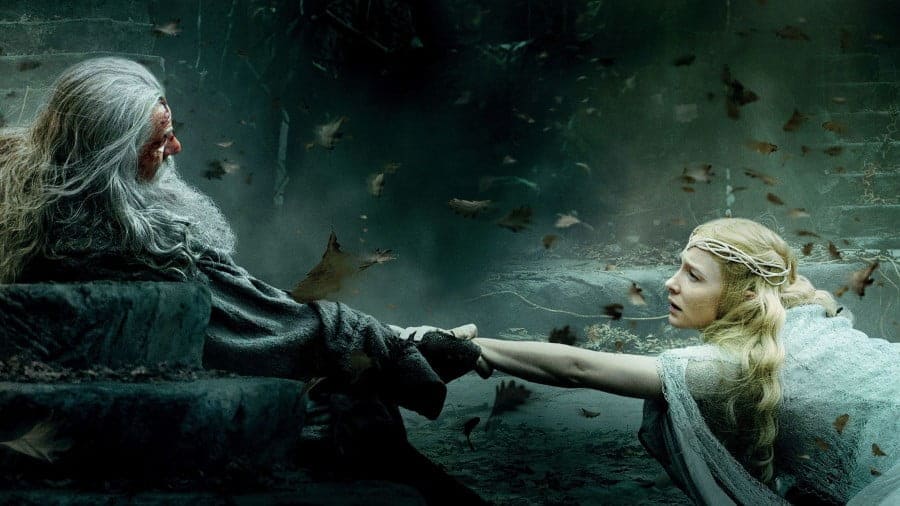 After watching The Hobbit trilogy you might be wondering, do Galadriel and Gandalf have a relationship in books? Even though it is not shown in the movie, it definitely looks like something is going on there.

So, are Galadriel and Gandalf in love in Lord of the Rings books, unfortunately, the answer is NO. But that doesn’t mean they don’t have any relationship.

In Battle of the Five Armies, Galadriel and Gandalf continue their relationship where they left it in An Unexpected Journey. When Gandalf goes to Rivendale to enlist the help of the elves and Galadriel promises to come to his aid whenever he requests it. She simultaneously gives Gandalf a pretty touching face stroke that would have launched a thousand fanfictions if there weren’t already a significant base rooting for the two to get together ever since reading the books.

Galadriel keeps her promise and comes to help Gandalf after he encounters Sauron in The Desolation of Smaug, but then their “relationship” progresses a step further. And by “further,” I mean Galadriel carries Gandalf like a damsel in distress and, later, Gandalf stares longingly at her before asking her to come with him and calling her “my lady” rather tenderly. (She doesn’t, because she’s got to kick Sauron’s butt instead). I mean, really, the only way you can’t hear the romantic music playing gently in the background of these moments is if you actually read the books or saw the original trilogy and are incapable of thinking of Gandalf as a particularly romantic character.

What is Galadriel and Gandalf relationship in books

Galadriel is an elf of high status, from the royal houses of Noldor and Teller, the granddaughter of two elven kings – Finwë and Olwë. Through her grandmother Indis, she was also closely related to King Ingwë of Vanyar. In Middle-earth, she, along with her husband, Lord Celeborn, ruled Lothlórien.

Galadriel was very beautiful, the beauty of her hair was legendary as she reminded Eldars of the light of the Two Trees. Galadriel was proud and rebellious, or at least she was in her youth. She was free-spirited, and during her life in Amman, she fantasized about the unexplored expanses of Middle-earth. Her favorite brother was Finrod, who shared her dreams. She had the ability to explore the minds and hearts of others, so they considered her clairvoyant. It is possible that because of her extraordinary beauty and power, she became proud.

Gandalf was one of the older wizards who was sent to Middle-earth to resist Sauron. During his two thousand years of being in Middle-earth, Gandalf began to understand the way these inhabitants lived, especially The Hobbit. Gandalf was constantly working on plans to counter Sauron himself, and he himself launched a chain of events that eventually resulted in the fall of the Lord of Darkness.

Here is a bit of theory that I got from reading some articles online.

I believe there was some form of an intimate relationship between the two. It was certainly platonic due to Tolkien’s religious beliefs and the fact that adultery was a sin and would not happen, but whether that would’ve been different had Tolkien had different views is anyone’s guess.

The two (Galadriel and Gandalf) certainly shared a close bond. They likely spent a large amount of time together as Olorin frequently visited the Gardens of Lorien and there spent time with the Elves who’d returned from the Halls of Mandos, and Galadriel had spent time there before the March of the Noldor. It’s possible that Olorin had encountered Galadriel, especially given her fame as one of the most beautiful elf-maids, given:

“the light of the Two Trees, Laurelin and Telperion, had been snared in [Galadriel’s] tresses.
Unfinished tales

Given that Olorin “loved the Elves, he walked among them unseen, or in form as one of them, and they did not know whence came the fair visions or the promptings of wisdom that he put into their hearts.” It’s more than likely they had interacted.

Even without interactions in Valinor, the two clearly have a close connection in Middle-earth. The two “shared the joys and burdens of bearing two of the Elvenrings”. They would most certainly have been aware of the other bearer, whether this had an effect on their relationship isn’t certain.

She strongly supported Gandalf’s case to be the head of the White Council, putting him against Saruman, the eventual leader.

Galadriel indeed had wished that Mithrandir should be the head of the Council, and Saruman begrudged them that, for his pride and desire of mastery was grown great; but Mithrandir refused the office, since he would have no ties and no allegiance, save to those who sent him, and he would abide in no place nor be subject to any summons.
The Silmarillion – Of the Rings of Power and the Third Age

Galadriel and Gandalf clearly had a deep mental connection as well. Liberties of such are taken in the Hobbit films, but even in the books we see Galadriel seemingly reading people’s minds, and she was able to “sense” Gandalf’s death against the Balrog and sent Gwaihir to his aid and clothed him in white with a new staff.

“That indeed is the command of the Lady Galadriel who sent me to look for you,” he answered… Healing I found, and I was clothed in white.
The Two Towers

The loss of Gandalf seems to take a significant toll on the Lady Galadriel, saying she could no longer see him nor the paths upon which he walks.

‘Now tell us where he is; for I much desired to speak with him again. But I cannot see him from afar, unless he comes within the fences of Lothlórien: a grey mist is about him, and the ways of his feet and of his mind are hidden from me.‘
The Fellowship of the Ring – Book II, Chapter 7: The Mirror of Galadriel

While reading through The Mirror of Galadriel for this answer I’d noticed something else, Galadriel is quick to defend Mithrandir when her husband, Celeborn, calls him foolish.

And if it were possible, one would say that at the last Gandalf fell from wisdom into folly, going needlessly into the net of Moria.
‘He would be rash indeed that said that thing,’ said Galadriel gravely. ‘Needless were none of the deeds of Gandalf in life. Those that followed him knew not his mind and cannot report his full purpose. But however it may be with the guide, the followers are blameless. Do not repent of your welcome to the Dwarf. If our folk had been exiled long and far from Lothlórien, who of the Galadhrim, even Celeborn the Wise, would pass nigh and would not wish to look upon their ancient home, though it had become an abode of dragons?’
ibid.

Furthermore, they fought off the darkness that was the necromancer for many a long age together, fighting at the fortress of the Necromancer in Dol Guldur.

Gandalf had at last prevailed upon Saruman and the White Council to attack Dol Guldur
The Return of the King – Appednix A: Annals of the Kings and Rulers

Finally, they left the East together and sailed to the West with Elrond, Frodo, and Bilbo, Galadriel having left Celeborn in Lothlorien

Then Elrond and Galadriel rode on… Then Círdan led them to the Havens, and there was a white ship lying, and upon the quay beside a great grey horse stood a figure robed all in white awaiting them. As he turned and came towards them Frodo saw that Gandalf…
The Return of the King – Book VI, Chapter 9: The Grey Havens

Given those points, one may wonder what about the infidelity that seems to come with the face she seems to have a platonic love for Gandalf. Well, we know from before the First Age that Míriel died giving birth to Fëanor, and Finwë took a second wife, Indis. While Indis or Finwë lived, Míriel couldn’t return from the Halls of Mandos, as an Elf could not have two wives. Finwë, however, pleading with the Valar to allow his Míriel to return to life in return for him joining Mandos’ side in his halls states that one may love two.

“It is unlawful to have two wives, but one may love two women, each differently, and without diminishing one love by another. Love of Indis did not drive out love of Miriel; so now pity for Miriel doth not lessen my heart’s care for Indis.
History of Middle-earth – Volume X: Morgoth’s Ring

In conclusion, I believe that she may have had a platonic love for Gandalf, and although she was married to Celeborn was able to love both him and Gandalf, both differently, but without diminishing the other.

It is best that you make your own conclusion about the relationship between Gadriel and Gandalf. It’s clear that Gandalf and Galadriel have an unbreakable bond that transcends petty labels like “platonic” or “romantic.” They’re loyal to one another, they understand one another, and they’re there for one another when it counts. There’s a beauty in their relationship as it is, no matter how you choose to define it, and you can certainly find evidence to support both conclusions in the books