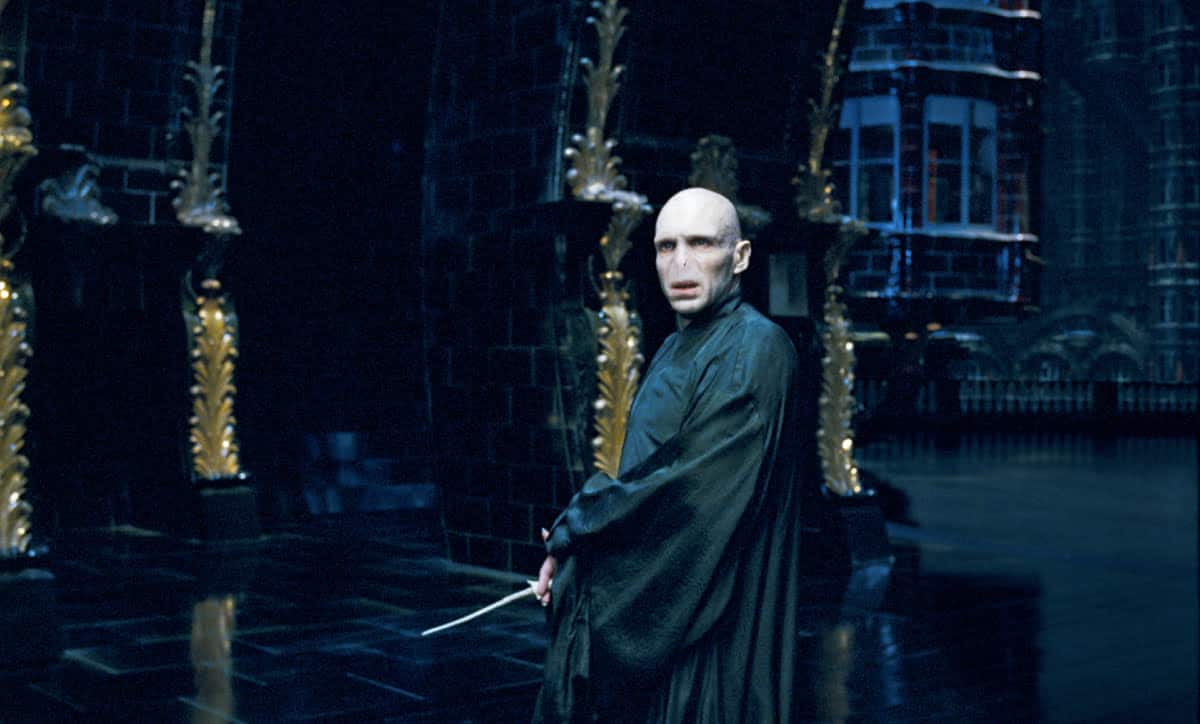 Is there at all a human being who would say that Lord Voldemort is a good or perhaps nice character? The answer is „Yes“ because there are people who love evil – whether they do it themselves or just watch others do it and enjoy it endlessly.

If books, movies, or games speak only of the good, many people would soon become bored. Even in life, we need a balance between good and evil and try to find a way for good to defeat evil. That’s why little Harry Potter got a worthy opponent in Lord Voldemort.

After finishing Hogwarts, Tom Marvolo Riddle decided to reject his birth name and became self-proclaimed Lord Voldemort (which name was given by an anagram of his baptized name).

If you want to find out what it looks like when a cute little orphan boy becomes a monster, do keep reading. Perhaps you too will start rooting for the real underdog.

Who is Tom Riddle?

Tom Marvolo Riddle was born on New Year’s Eve on December 31, 1926, as a half-blood wizard, the only child of the Muggle Tom Riddle and the witch Merope Riddle. Since his mother died after giving birth to him and his father left his family, he grew up in Wool’s orphanage, a Muggle orphanage in London.

Riddle grew up unaware of his wizarding heritage because the orphanage staff didn’t know anything about his parents, especially his mother. They believed she was a circus worker.

Despite knowing anything about his parents, Tom Riddle quickly realized he was different from the other children in the orphanage. He discovered that only with the power of his mind he could move objects and make them float.

He learned to manipulate animals and other creatures and also spoke Parseltongue – the language of serpents. After an argument with colleague Billy Stubbs, he used his power to hang the boy’s rabbit.

Now, imagine a child, an orphan who is factually different than everyone he knows. This kind of trauma would either turn him into a hero or a vicious villain. In any movie, book, song, or real life, you see neglected children and teenagers who fight the invisible battles.

Tom was a child fueled by rage and questions. Why was he left alone, why was he different? And inevitably, will anyone ever understand him? Even though Albus Dumbledore was a prominent authority figure who came into his life, Tom needed a different approach. Or he just needed to get those feelings out.

Albus Dumbledore, who at the time was the Transfiguration teacher at Hogwarts School of Witchcraft and Wizardry, came to the orphanage with the decision to offer Tom (now an 11-year-old boy) a place at Hogwarts, which he immediately accepted.

The orphanage’s supervisor, Mrs. Cole, told him that Tom had always been a strange and special child. When he was very young, he never cried, and he was violent towards other children and often scared them. He also used to steal things from his colleagues.

Because of all these incidents, he never showed remorse. He felt only contempt for others and showed his „uniqueness“ with arrogance and selfishness.

Now, such a child shows signs of a condition leaning towards a disorder. Wizard or not, do you think Tom needed psychological help, with the help of magic or not? Showing signs of aggression towards animals and lack of remorse could potentially be a part of a psychopathic state. Would Tom benefit from this approach in the real world?

Tom didn’t want to accept the fact his mother was the witch. If she was, she would have been able to avoid dying. He thought everything was going so easy in the world of wizards, where he would do anything he wanted to.

At first, Tom believed Albus Dumbledore was a doctor or a psychiatrist until Professor set on fire Riddle’s cupboard, using a Flame-Freezing Charm. Finally, Tom realized he was going to the place where he can constantly use his magic. But first of all, he had to apologize for his behavior and return stealing items to his colleagues.

But it wasn’t that simple. Tom had underlying trauma and displayed behavior not normal for a child, even a wizard child at that.

Arriving at Hogwarts School of Witchcraft and Wizardry, the Sorting Hat immediately recognized him as one of the future members of the Slytherin house.

The poor, silent orphan in a frayed cloak, eager for knowledge immediately aroused the sympathy of the Hogwarts teachers.  But not in everyone. Dumbledore was always suspicious of Riddle because of his orphanage past and behavior during their meeting. This was the main reason Tom started to fear and despise the future headmaster of Hogwarts.

Dumbledore’s suspicions were not unfounded at all.

Although Tom Riddle soon became the perfect, he and his colleagues continued to practice dark magic that led to a series of incidents, including the opening a Chamber of secrets and the murder of a girl Myrtle Warren, later known as the Moaning Myrtle. Riddle framed his fellow student Rubeus Hagrid for the murder, who was expelled from Hogwarts for it, and Tom received the trophy for Special Services to the school.

After finishing 7 years of Hogwarts School of Witchcraft and Wizardry, Tom had been offered several positions in the Ministry of Magic. Only he was interested in was a job of Professor of Defence Against the Dark Arts, but he had been refused because he was too young.

Tom disappeared but soon it was heard he got the job at Borgin & Burkes, an antique shop of unusual and ancient wizarding artifacts. When one of the customers was found dead as also as two of her precious items – Salazar Slytherin’s locket and Helga Hufflepuff’s cauldron, Riddle himself disappeared again.

Once again refused for the job of Professor of Defence Against the Dark Arts, we haven’t heard of him for a very long time… until the murder of Lily and James Potter, committed by Lord Voldemort.

How did Tom Riddle become so powerful?

We could say that Tom Riddle’s power lies entirely on magic. Without magic, he would be nobody and nothing. Besides, he was naturally talented, with a strong desire for knowledge, which turned him from an ordinary boy into something really extraordinary.

As a true member of the Slytherin House, he had all qualities to be the most powerful wizard of all times: talent, ambition, cunning, and selfishness. Also, he used to practice Dark Magic, the most dangerous magic there is.

Tom was a greedy person, without a sense of guilt, empathy, or love. Becoming very popular, he gathered around him a large number of Slytherin supporters, some of whom later became members of the Death Eaters.

Although he called them his friends, it was clear that they were all his servants who obediently carried out orders, not because of their loyalty but because of fear.

How did Tom Riddle lose his nose?

If you have read the Harry Potter books, you will find that it is never mentioned he had no nose. In the movies instead, he had two slits like a snake.

While Tom Riddle was young, he was always described as a handsome young man, until he became Lord Voldemort. The moment he decided to divide his soul into multiple pieces, it also began his physical transformation. As his soul was no longer whole, so did his body began to disintegrate as well.

So, that was the high price of his power. On every Horcrux had been attached a part of Tom’s soul, so his „noseless“ looking was a normal side-effect in the whole story. Lord Voldemort didn’t bother with his good-looking face (and body) – he just wanted to be the most powerful wizard and live forever.

„Voldemort had entered the room. His features were not those Harry had seen emerge from the great stone cauldron almost two years ago: They were not as snakelike, the eyes were not yet scarlet, the face not yet masklike, and yet he was no longer handsome Tom Riddle.

It was as though his features had been burned and blurred; they were waxy and oddly distorted, and the whites of the eyes now had a permanently bloody look, though the pupils were not yet the slits that Harry knew they would become. He was wearing a long black cloak, and his face was as pale as the snow glistening on his shoulders.“

(from the book „Harry Potter and the Half-Blood Prince“)

It is quite clear that without Lord Voldemort there would be no Tom Riddle or his fame would be short-lived. What actually bothered him the most was his non-wizarding half, because of which he persecuted people who were precisely like himself.

But as we said at the beginning, for good to exist, we must have evil, for the sake of balance. And then do everything to weigh the scales in favor of good.