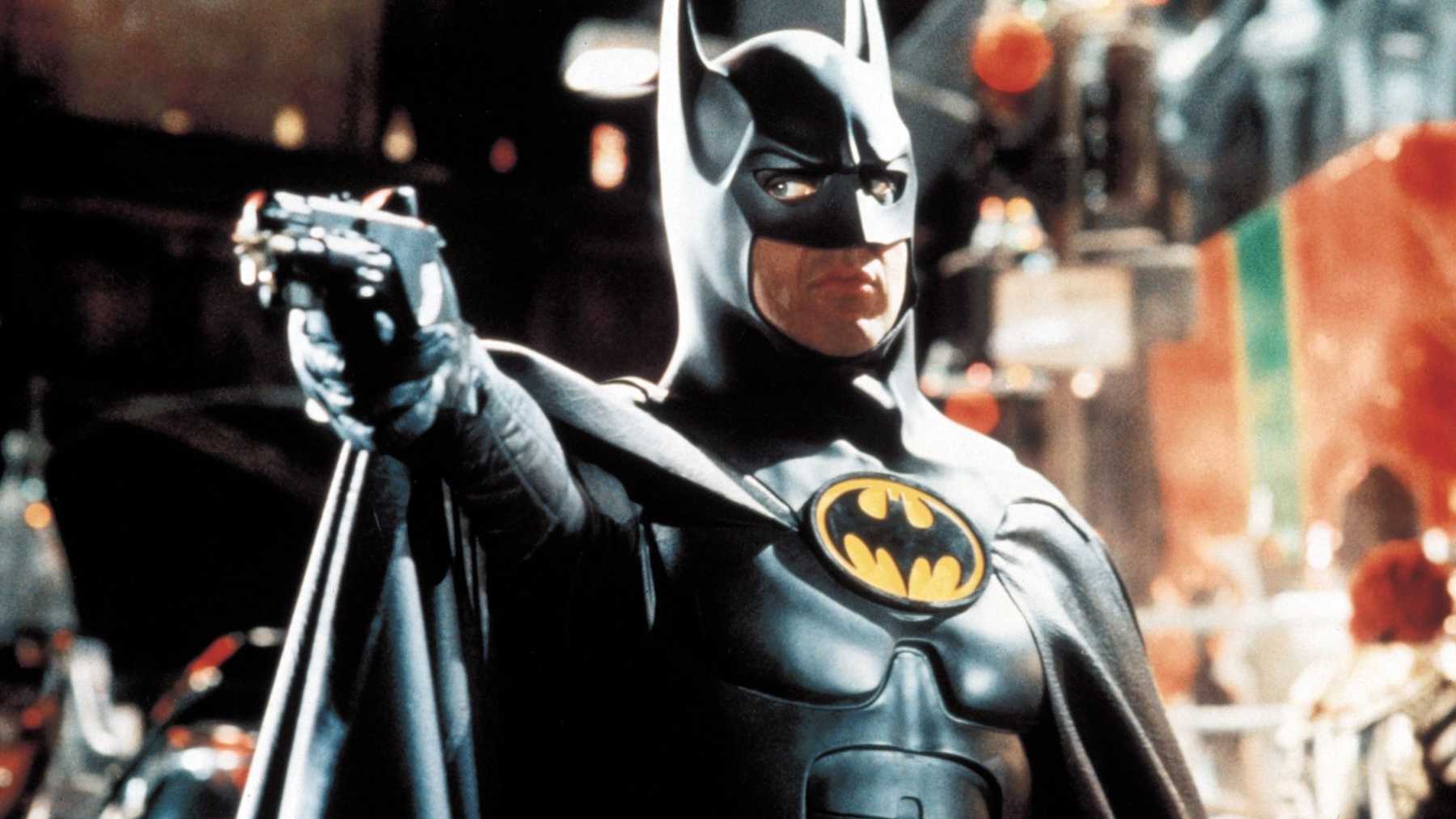 In the history of live-action adaptations of Batman, a total of nine actors have portrayed the Dark Knight (not including those who’ve only portrayed him as a child and those who’ve portrayed him in TV series and not in movies). Most of them have had at least two stints as the Caped Crusader, with some having more and some having just one stint. This article is going to be just one in our series on the Batman actors, where we are going analyse each actor’s tenure as the Dark Knight. Today, the topic is going to be – Michael Keaton.

Michael Keaton as appeared as the Batman in a total of two films – Batman (1989) and Batman Returns (1992) – and is known as the first modern cinematic Batman. He is also set to reprise his role in the DCEU’s The Flash.

How many times did Michael Keaton play Batman?

Michael Keaton played Batman a total of two times. He was cast as the Dark Knight in Tim Burton’s 1989 Batman movie – to much backlash, we must admit – and reprised his role in the 1992 sequel, Batman Returns. He was set to appear in a third film, but ultimately declined after Burton had been replaced by Joel Schumacher as director.

In 2020, it was confirmed that Michael Keaton would return as Bruce Wayne/Batman in The Flash, a movie set within the DCEU, with reports claiming that he is going to have a much bigger role in the series from that movie onward.

When did Michael Keaton play Batman?

Now that we’ve established that Michael Keaton played Batman a total of two times, with an announced third appearance, let us talk about those appearances a bit more.

When Warner Bros. started the pre-production of the 1989 Batman movie, they had to find an actor for the titular role. The studio wanted a big name for the role of Batman, but also someone who would be perceived as a typical action movie star. Burton approached Pierce Brosnan, who declined a comic book role, while other potential candidates include Mel Gibson, Kevin Costner, Charlie Sheen, Tom Selleck, Bill Murray, Harrison Ford, Willem Dafoe, and Dennis Quaid.

At one point, producer Jon Peters suggested Michael Keaton, arguing he had the right “edgy, tormented quality” after having seen his dramatic performance in Clean and Sober; having directed Keaton in Beetlejuice, Burton agreed. Keaton’s casting caused a controversy among the fans, with a total of 50,000 protest letters sent to Warner Bros. offices. Kane, Hamm, and Uslan, all writers and producers on the film, also heavily questioned the casting.

But, as it turned out, Michael Keaton was a hit for the franchise and his interpretation is still considered to be among the best in the history of the franchise. In this movie, Batman had to fight a new threat in Gotham City – the Joker – who was also, while he was a common street criminal known as Jack Napier, killed Bruce’s parents in the terrible incident from Batman’s past. Bruce Wayne also has a romance with journalist Vicki Vale, who he has to save from the Joker. In the end, the two of them face off atop Gotham Cathedral, where Joker meets his end after failing to escape and falling from the top of the Cathedral to the street.

Batman was a success and Warner Bros. quickly ordered a sequel, with Michael Keaton returning and earning a – for that time – incredible $11,000,000 fee for the role in Batman Returns.

In this Christmas movie, Batman has to fight Oswald Cobblepot, an orphaned freak of nature who operates as a criminal known as The Penguin. He also has to deal with Catwoman, a new character in Gotham, who was created after Selina Kyle had been killed by businessman Max Schreck.

This turned out to be Keaton’s final appearance in the original series, since he declined to return after Tim Burton had been replaced by Joel Schumacher as the director.

How were these movies received?

Interestingly enough, Keaton’s Batman films were really well-received by both the fans and the critics and are today considered to be classics of the superhero genre. The franchise was so popular that it even pushed Warner Bros. into producing Batman: The Animated Series, today considered to be one of the best television series in history.

Batman was initially perceived as being too dark for that time, but was nevertheless praised by critics.

James Berardinelli called the film entertaining, with the highlight being the production design. However, he concluded, “the best thing that can be said about Batman is that it led to Batman Returns, which was a far superior effort.”

Roger Ebert was highly impressed with the production design, but claimed “Batman is a triumph of design over story, style over substance, a great-looking movie with a plot you can’t care much about.” He also called the film “a depressing experience”. His reviewing partner Gene Siskel disagreed, describing the film as having a “refreshingly adult” approach with performances, direction and set design that “draws you into a psychological world.”

The Batman also won an Academy Award for Best Art Direction, thus becoming the first mainstream superhero movie to have won an Oscar.

Batman Returns was considered to be a superior movie to the original Batman, with most criticism being directed towards its dark tone and violence. The emotional depth Burton added, along with the majestic production made Batman Returns an instant classic.

Janet Maslin in The New York Times thought that “Mr. Burton creates a wicked world of misfits, all of them rendered with the mixture of horror, sympathy and playfulness that has become this director’s hallmark.”

Peter Travers in Rolling Stone wrote: “Burton uses the summer’s most explosively entertaining movie to lead us back into the liberating darkness of dreams.” He also praised the performances: “Pfeiffer gives this feminist avenger a tough core of intelligence and wit; she’s a classic dazzler… Michael Keaton’s manic-depressive hero remains a remarkably rich creation. And Danny DeVito’s mutant Penguin—a balloon-bellied Richard III with a kingdom of sewer freaks—is as hilariously warped as Jack Nicholson’s Joker and even quicker with the quips.”

Desson Howe in The Washington Post wrote: “Director Burton not only re-creates his one-of-a-kind atmosphere, he one-ups it, even two-ups it. He’s best at evoking the psycho-murky worlds in which his characters reside. The Penguin holds court in a penguin-crowded, Phantom of the Opera-like sewer home. Keaton hides in a castlelike mansion, which perfectly mirrors its owner’s inner remoteness. Comic strip purists will probably never be happy with a Batman movie. But Returns comes closer than ever to Bob Kane’s dark, original strip, which began in 1939.” He described Walken as “engaging”, DeVito as “exquisite” and Pfeiffer as “deliciously purry.”

Todd McCarthy in Variety wrote that “the real accomplishment of the film lies in the amazing physical realization of an imaginative universe. Where Burton’s ideas end and those of his collaborators begin is impossible to know, but the result is a seamless, utterly consistent universe full of nasty notions about societal deterioration, greed and other base impulses.”

Conversely, Roger Ebert of the Chicago Sun-Times gave the film two stars out of four, writing: “I give the movie a negative review, and yet I don’t think it’s a bad movie; it’s more misguided, made with great creativity, but denying us what we more or less deserve from a Batman story. No matter how hard you try, superheroes and film noir don’t go together; the very essence of noir is that there are no more heroes.” He compared the Penguin negatively with the Joker of the first film, writing that “the Penguin is a curiously meager and depressing creature; I pitied him, but did not fear him or find him funny. The genius of Danny DeVito is all but swallowed up in the paraphernalia of the role.”

The film was also nominated for two Academy Awards, but did not win any of them.

How was Michael Keaton received as Batman?

As far as Michael Keaton is concerned, he was received with praise when both movies came out, despite the initial backlash and doubts over his casting. He was an excellent Batman and is even today, after so many years have passed, still regarded as one of the best Batmen on screen, the animated versions included. It was a pity to see him leave the role in 1995, but with Schumacher completely changing the style, we now think that it was for the best. This is why we are glad to state we are overjoyed with the fact that he is going to return to the role in the DCEU and we look forward to seeing more of him sooner, rather than later.

For our other articles in the series, check out: Adam West, Val Kilmer, George Clooney, Christian Bale, and Ben Affleck.