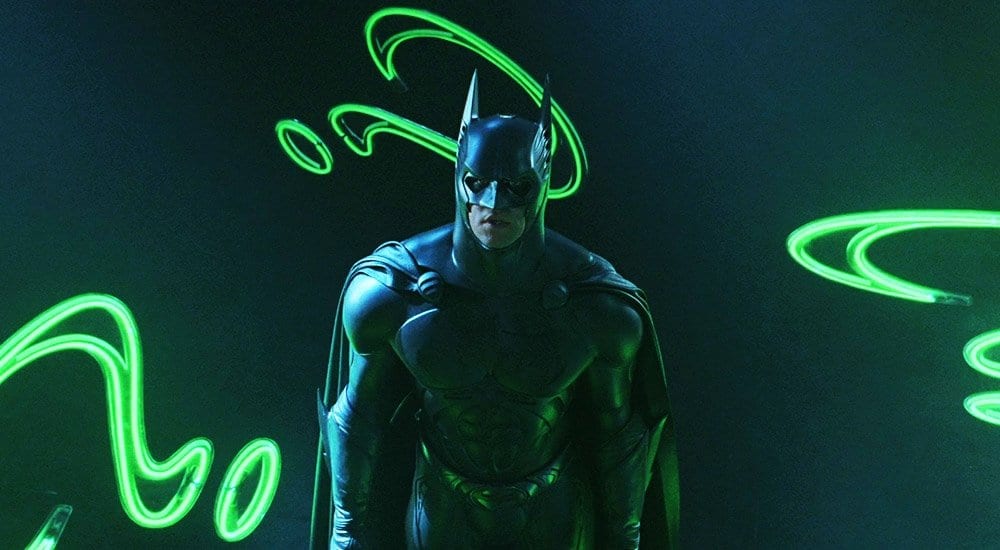 In the history of live-action adaptations of Batman, a total of nine actors have portrayed the Dark Knight (not including those who’ve only portrayed him as a child and those who’ve portrayed him in TV series and not in movies). Most of them have had at least two stints as the Caped Crusader, with some having more and some having just one stint. This article is going to be just one in our series on the Batman actors, where we are going analyse each actor’s tenure as the Dark Knight. Today, the topic is going to be – Val Kilmer.

Val Kilmer appeared just once in the role of Batman, in Joel Schumacher’s Batman Forever (1995). Seeing how the movie and the interpretation were received, it’s for the best that he never returned to the role.

How many times did Val Kilmer play Batman?

When Michael Keaton decided not to return as Batman in Batman Forever, Val Kilmer was brought in as his replacement. He played the Dark Knight in Batman Forever and that remains his only appearance in the titular role. Val Kilmer was set to return to the role, but he took on another role in the meantime and was, ultimately, replaced by George Clooney; luckily for him, but not for us.

When did Val Kilmer play Batman?

Now that we’ve established that Val Kilmer played Batman in just one movie, let us talk about the failure that was Batman Forever:

After the success of Batman Returns, Warner Bros. fast tracked a sequel, but replaced Burton with Joel Schumacher. Schumacher completely changed the tone, which led to Michael Keaton declining a total of $15,000,000 to return to the role; Keaton disliked the new direction of the series and wanted to explore other options.

The studio quickly want searching for a new, younger actor to replace Keaton. Ethan Hawke was initially offered the role, but he turned it down, later stating that he still regrets that decision. Val Kilmer soon appeared as a potential replacement, but the studio was also interested in Keanu Reeves, Alec and William Baldwin, Dean Cain, Tom Hanks, Kurt Russell, Daniel Day-Lewis, Ralph Fiennes, Johnny Depp and Mel Gibson. Cain was scrapped as he was well known for starring in the TV series Lois & Clark: The New Adventures of Superman. Kilmer, who as a child visited the studios where the 1960s series was recorded and shortly before had visited a bat cave in Africa, was contacted by his agent for the role. Kilmer signed on without reading the script or knowing who the director was. Boy, oh, boy did he make a wrong decision there…

And the rest is history, really. Kilmer appeared in Batman Forever, a movie which never really knew what it wanted to achieve. The more than charismatic Jim Carrey (as The Riddler) and Tommy Lee Jones (as Two-Face) stole the movie, despite not being brilliant themselves (which is all Schumacher’s fault, let’s not kid ourselves), and Kilmer had to be content with just being able to wear the cape and cowl, but without leaving any real mark on the role or the movie itself. And this is Val Kilmer’s story… there’s really not much to add here, as a dull interpretation doesn’t really deserve more than a brief comment.

Unlike Burton’s two films, Batman Forever and its sequel were met with mostly negative reviews, with the sequel being completely panned by the critics. The change of tone that came with Schumacher taking over the series from Tim Burton was a big step backwards and completely destroyed the ambiance and tone built by Burton’s emotional and pain-focused approach to the material.

Batman Forever received mixed to negative reviews from critics. Despite fixing Burton’s main “problem” – the dark tone, which was replaced with a campy tone – the movie practically ruined everything else and although it wasn’t as horrible as its sequel, it’s still an underwhelming work.

Peter Travers of Rolling Stone said “Batman Forever still gets in its licks. There’s no fun machine this summer that packs more surprises.” Travers criticized the film’s excessive commercialism and felt that “the script misses the pain Tim Burton caught in a man tormented by the long-ago murder of his parents” seeing the Bruce Wayne of Kilmer as “inexpressive”.

Gene Siskel of the Chicago Tribune and Roger Ebert of the Chicago Sun-Times both gave the film mixed reviews, but with the former giving it a thumbs up and the latter a thumbs down.

In his written review, Ebert wrote: “Is the movie better entertainment? Well, it’s great bubblegum for the eyes. Younger children will be able to process it more easily; some kids were led bawling from Batman Returns where the PG-13 rating was a joke.”

Mick LaSalle of the San Francisco Chronicle had a mixed reaction, concluding “a shot of Kilmer’s rubber buns at one point is guaranteed to bring squeals from the audience.” Brian Lowry of Variety believed “One does have to question the logic behind adding nipples to the hard-rubber batsuit. Whose idea was that supposed to be anyway, Alfred’s? Some of the computer-generated Gotham cityscapes appear too obviously fake. Elliot Goldenthal’s score, while serviceable, also isn’t as stirring as Danny Elfman’s work in the first two films.”

Still, the movie was a box office success and it prompted Warner Bros. to order a sequel.

How was Val Kilmer received as Batman?

Val Kilmer’s Batman was received in the same manner as the movies – with mixed to negative comments. He lacked the pain and the charisma of Michael Keaton, but his interpretation wasn’t all to bad per se, as much as it was ruined by Schumacher’s approach to the film. Kilmer – luckily – declined to return for a sequel and probably saved himself from further embarassment, since that came afterwards was a complete horror. Unlike Keaton, Kilmer wasn’t even able to best the villains of the movie, despite their campy characterisation.

For our other articles in the series, check out: Adam West, Michael Keaton, George Clooney, Christian Bale, and Ben Affleck.