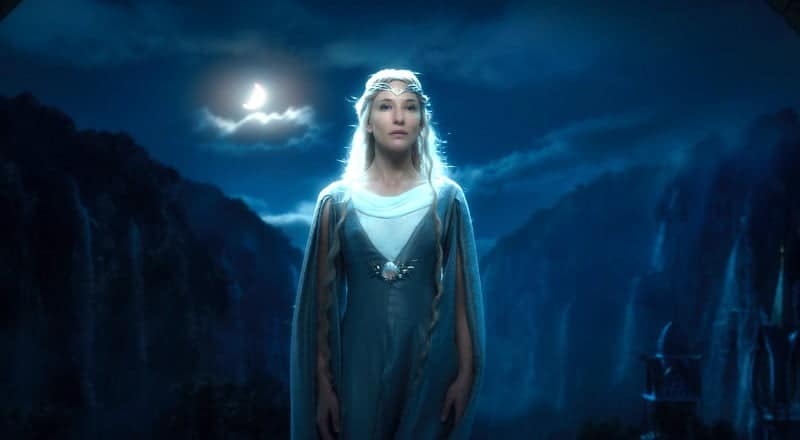 There are many characters in Lord of the Rings world, and in this article, we are bringing you how old all of those characters are (or at least the most popular ones). We have sorted them by their age from youngest to oldest character.

In this table, we will bring you how old are the characters in Lord of the Rings (Middle Earth), and under it, we will explain when they are born and their age.

* Legolas’ age is unknown, as is whether he had siblings. But, it has been invented for movies, where they say that he has 2931 years.

Ok, so let’s dive deeper in ages of Lord of the Rings characters, or better to say, we will only write more about older Middle Earth characters because their age is mostly unknown.

Originally known as Sméagol, later called Gollum after a disgusting horrible sound that he began to make in his throat. It is estimated that he was born around 2430 of the Third Age. He died on March 25, 3019 of the Third Age.

His life was extended far beyond its natural limits by the effects of possessing the One Ring. At the time of his death, Gollum was about 589 years old, a remarkable age for a creature who was once Hobbit-like, but he had been deformed and twisted in both body and mind by the corruption of the Ring.

Full name Arwen Undómiel. As told in The Tale of Aragorn and Arwen”, Aragorn in his twentieth year met Arwen for the first time in Rivendell, where he lived under Elrond’s protection. Arwen, then over 2,700 years old, had recently returned to her father’s home after living with her grandmother Lady Galadriel in Lothlórien.

In the official movie guide for The Lord of the Rings, a birthdate for Legolas is set to TA 87. This would make him 2931 years old at the time of the War of the Ring.

But, that is what the movie says, Tolkien never gives an exact age for Legolas, although he hints several times that Legolas has lived for a very long time. For example, while pondering the building of Meduseld in Edoras, Legolas said, “Five hundred times have the red leaves fallen in Mirkwood in my home since then … and but a little while does that seem to us.” If he really sees five hundred years as ‘a little while’, then he would appear to be several thousand years old.

Tolkien does not specifically give Legolas’ age but many have used what details Tolkien does give to hazard a guess. There are no known dates concerning Legolas before TA 3018. It’s safe to say that Legolas was most likely born after Oropher, his grandfather, moved his people across the Misty Mountains, since in the book he referred to the Ñoldor elves as a “strange race”. That would mean he’s at most 5000 years old which places his birthdate in the latter part of the Second Age, at the earliest. Legolas is never mentioned in any account of the Last Alliance of Elves and Men, so most assume he was born in the Third Age after Isildur took the Ring of Power.

Legolas has never been to Lórien before he travels there with the Fellowship. Therefore, we can assume that he was not with his grandfather’s people when they left Lórien for Northern Mirkwood. Before the Shadow of Dol Guldur fell on Mirkwood in TA 1000, Legolas’ people spent time amongst their Lórien neighbors. But when the Shadow fell, they “retreated before it as it spread ever northward, until at last Thranduil established his realm in the north-east of the forest and delved there a fortress and great halls underground.” So it seems likely that Legolas’ birth-date was after TA 1000 when the Kingdom of Northern Mirkwood was created. This would make him younger than any other elf character in the series, including Arwen. In the Lord of the Rings Trilogy, Legolas refers to his traveling companions many times as “children”. Yet when he arrived at Fangorn, he claimed to feel young compared to the forest, saying, “It is old, very old. So old that I almost feel young again, as I have not felt since I journeyed with you children.”

Very hard to tell this one.

Elrond was the son of Eärendil and Elwing, and a great-grandson of Lúthien, born in Beleriand in the First Age, making him well over 6,000 years old by the time of the events described in The Lord of the Rings. Elrond’s twin brother was Elros Tar-Minyatur, the first High King of Númenor.

There is also this, but a year here or there…

Elrond and Elros were twins, at least according to The Tale of Years in The War of the Jewels.

SO Galadriel is 8372 years at the time of Sauron’s final defeat.

That’s based on the timeline in the Annals of Aman, which Tolkien wrote in the 1950s. It uses a conversion factor of 9.582 solar years per Year of the Trees. She was born in YT 1362.

There are some older Elves then Galadriel, but as we said in beginning we are putting here only the more famous, and you can find out more about them in our article about who is the oldest Elf in Lord of the Rings.

The question is essentially unanswerable. Gandalf, or better to say Olórin, predates the creation of the world (Arda) and even the creation of the universe (Ëa). He existed before time did, and for the first few ages of his existence (probably most of his “life”), there was no way of keeping track of time.

The best we can do is to say ‘He’s so old that it is impossible to say how old he is. He’s so old that years weren’t invented until he was already an “old man”.’ The only LotR characters who are about the same age as Gandalf are Sauron, Morgoth, and Eru Ilúvatar. In The Silmarillion, all the Ainur are roughly the same age as Gandalf. In a very real way, Gandalf is older than time itself. This is impressive, but not really unique in Tolkien’s world. As I said, all the Ainur (we don’t know how many of them there are, but it is probably in the dozens) are as old as Gandalf.

If we talk about how old is he as Gandalf in Middle Earth, then the answer is “roughly 2,000 years.”

All those characters, as well as Gandalf (Olórin), are Ainars also known as the Holy Ones. They were the first and mightiest beings created by Eru Ilúvatar long before the beginning of the World.

So, just as Gandalf, they were beings that were born before time itself and we can’t really determine their age.

“There was Eru, the One, who in Arda is called Ilúvatar; and he made first the Ainur, the Holy Ones, that were the offspring of his thought…”

—First words of the Ainulindalë

Eru was transcendent, completely outside of and beyond the world. He first created a group of angelic beings, called in Elvish the “Ainur,” and these holy spirits were co-actors in the creation of Arda through holy music and chanting called the “Music of the Ainur.” He is known also as “the All-Powerful”, and he alone could create independent life, or reality, using the “Flame Imperishable”.

That’s it for today, we also have an article about how old are the Star Wars characters, who is the oldest elf in LOTR, as well as how old are the Avengers in the MCU, so if you are interested, you can check them out.