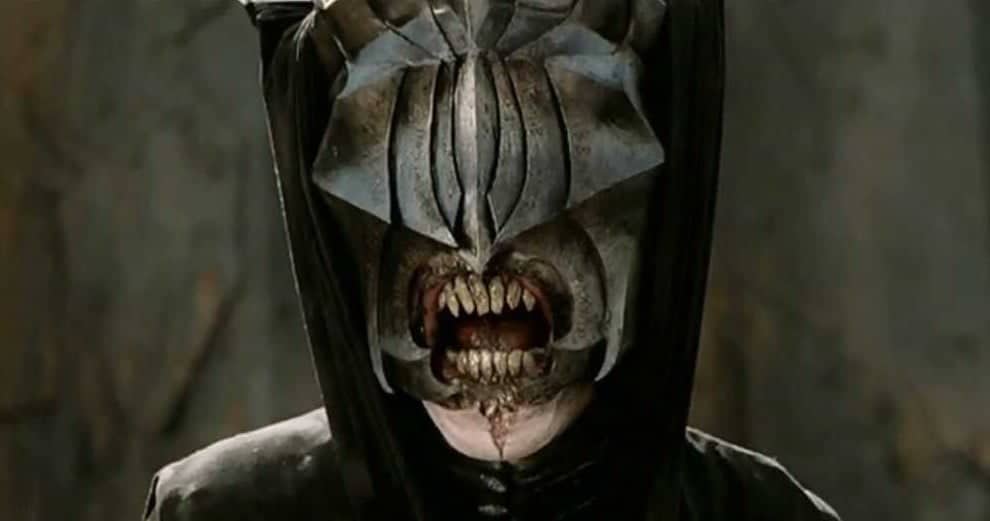 If you would like to know more about Mouth of Sauron you have come to the right place. In this article, we will cover who Mouth of Sauron is, what exactly was he, who plays him in the movie, what did he tell Gandalf, how did he die, and more.

The Mouth of Sauron is a character from the mythology of Middle-earth created by JRR Tolkien. He was a man, the Black Númenorean, the messenger of Sauron and commandant of his main fortress, the Barad-dûr (“Dark Fortress”). He was called the spokesperson of Sauron because no one knew his name. Even he himself forgot how it sounded long ago. Appears in the Lord of the Rings. He probably died on March 25, 3019, the Third Age

A Man of great stature, the Mouth of Sauron was potentially the equal of the Dúnedain but had fallen into darkness. It is stated that “he entered the service of the Dark Tower when it first rose again”.

He had learned much sorcery during his time under Sauron and knew many of the Dark Lord’s plans. Being crueler than an Orc and cunning, he rose in power and favor.

He joined Sauron’s service after his return to Middle-earth in the Third Age. Due to his abilities, he was high among Sauron’s subordinates, for he was the commander of the Barad-dûr fortress.

He also studied sorcery and knew his master’s intentions quite well, and in cruelty he did not give way to orcs

Thanks to the secret black magic he could probably extend his life and perhaps he did so since the Second Age. He was not a ghost-like Nazgûl, but a living man. Like most soldiers of the Dark Lord, he dressed in black.

Was Mouth of Sauron a member of Erebor?

The details of his activities before the War of the Ring remain unknown. It can be assumed that he was a messenger sent to Erebor and Dale, wherein 3017 and 3018 of the Third Age he met with King Brand and Dáin Iron Foot. At that time, he visited the dwarven state three times, asking for a land of hobbits and promising Dáin Sauron’s friendship and reward for finding the Bilbo to give to the Lord of the Darkness or at least providing information about him. In case of refusal to cooperate, he threatened him and Brand with war.

This messenger’s identification with the Sauron is uncertain. We only know that this envoy arrived on horseback at night, and no one saw him clearly, and during the conversation, according to Glóin’s account :

(…) he lowered his wild voice and would probably sweeten him if it were possible. (…) He finished and his hiss came from his chest like from a nest of vipers, and everyone standing nearby shuddered.

The Mouth of Sauron briefly appeared when he haggled with the army of the west in front of the Morannon, trying to convince Aragorn and Gandalf to give up and let Sauron win the battle for Middle-earth. Though he came before Aragorn and his men as an ambassador, he used quite insolent speech when he dealt with them. He tried to intimidate the army into surrendering by showing them the mithril coat of Frodo Baggins to make them think that the Ring-bearer had been captured. When Gandalf turned down his proposal, the Mouth of Sauron set all the armies of Barad-dûr upon them.

The Mouth’s fate is nowhere recorded, but it is probable he died in the assault before the Morannon. If he had survived, it is likely that he would have been one of the leaders in the retreat of Sauron’s evil servants after the fall of Barad-dûr.

Who plays Mouth of Sauron in Lord of the Rings movie

In the film adaptation of The Lord of the Rings directed by Peter Jackson, the role of Mouth of Sauron was played by Bruce Spence. The scene with his participation was included in the extended version of The Return of the King, released on DVD.

In the film, the episode with the Mouth of Sauron is shorter than in the novel, and its ending is completely different than in Tolkien’s book. In the film, the messenger leaves alone from Morannon (in the book he is accompanied by Sauron’s soldiers) opposite Gandalf and his companions. He wears a helmet, with the words “LAMMEN GORTHAUR” (Sindarin for “Voice of (Sauron) The Abominable”) in Cirth written on it, that covers his entire face, except for slightly distorted lips. He shows his opponents chained Frodo and teases them that the hobbit suffered a lot. When he begins to address Aragorn, he rides up to him (they are both on horses) and Aragorn cuts off his head, which Gimli comments with the words “Well, and the end of negotiations.”

This sequence is often criticized by purists and outsiders alike; through human history, it was considered a crime of war to execute messengers or heralds. In the book, the Mouth actually specifically points out that as an ambassador he is protected by the laws of war, and Gandalf acknowledges this:

“…though Aragorn did not stir nor move hand to weapon, the other quailed and gave back as if menaced with a blow. “I am a herald and an ambassador, and may not be assailed!” he cried. “Where such laws hold,” said Gandalf, “it is also the custom for ambassadors to use less insolence. But no one has threatened you. You have naught to fear from us…”

What was the real name of Mouth of Sauron

The name of the Mouth of Sauron itself poses an inconsistency in the narrative. Aragorn mentions that the name “Sauron” (meaning “Abominable”) is the name used by his enemies, and according to Aragorn, Sauron himself did not permit it pronounced. Therefore it would be strange for a servant of Sauron to have a title that includes the word “Sauron”.

In an early manuscript, the name of the messenger is said to be Mordu, apparently meaning “Black Darkness” or “Black Night”.

Mouth of Sauron portrayal in adaptations

The Mouth of Sauron briefly appears at the Black Gate. He was here portrayed by Don Messick.

The Mouth of Sauron’s role is expanded. He is portrayed as the person who tortures Gollum into telling Sauron of “Baggins” and “Shire”, though he is not named until the credits. John Rye provided the voice of the Mouth of Sauron, symbolizing the function of the Lieutenant of Barad-dûr.

The Mouth of Sauron does not appear in the theatrical cut of the movie, but he does appear in the extended version, played by an unrecognizable Bruce Spence. His helmet, with the words “LAMMEN GORTHAUR” (Sindarin for “Voice of (Sauron) The Abominable”) in Cirth written on it, covers his entire face except for his mouth, which is horribly diseased and disfigured by all the evil he has spoken, and disproportionately large, creating an unsettling effect. In fact, much of this spectacle is a result of CGI effects. Actually Jackson conceived this idea long after the footage had been shot and asked his special effects team to create the effect digitally.

The extended DVD cast commentary mentions that Jackson considered different depictions of the character, such as having Kate Winslet (who starred in Heavenly Creatures, another Jackson film) play the role, partially to emphasize the temptations Aragorn was facing.

In the movie itself, Aragorn decapitates the Mouth of Sauron with his sword. This sequence is often criticized by purists and outsiders alike; through human history, it was considered a crime of war to execute messengers or heralds. In the book, the Mouth actually specifically points out that as an ambassador he is protected by the laws of war, and Gandalf acknowledges this (quote already mentioned earlier in the text).

What did the Mouth of Sauron tell Gandalf and the others at the Black Gate?

It is a bit different in the book and in the movie.

In both versions, each side wants to reveal as little as possible and gain as much knowledge as possible. Sauron does not want to reveal that the “spies” (for such he believes Sam and Frodo to be) were not captured, and wants to find out why they were sent into Mordor. He also wants to torment the leaders of the army united against them, and cow them if he can. Gandalf seeks to play out the parley, using this opportunity to have Sauron’s full attention for as long as possible.

In the book, it is very much a battle of will. No blow is struck, yet the Mouth of Sauron, possibly the greatest living human sorcerer, feels as if he has been struck. Such is the power of Gandalf the White as he now begins to reveal himself.

But there is much more in the text of greater significance than is in the movie. In the book:

Overall, the book is about the power of wisdom and compassion vs. the power of fear and violence. This is very different than the movie – designed to succeed as a Hollywood blockbuster – where violence vs. violence is what the producers think we want.

Is the Mouth of Sauron above or below the rank of the Nazgul in Sauron’s hierarchy?

It is never explicitly said, but we can think about them differently, the Mouth of Sauron was a diplomat, and the Nazgul were generals. There could be some operations where the diplomat might be giving orders to generals and other cases where the generals would be in charge. It depends on the mission and Sauron’s desires.

As a mortal, the Mouth would not hold his position as long as the Nazgul would, but he is clearly a direct representative of Sauron himself. His cockiness in the battle at The Black Gate was a reflection of his master’s cockiness. Sauron tells him what to say, and he says it. For all his other faults, Sauron does value competence and loyalty.