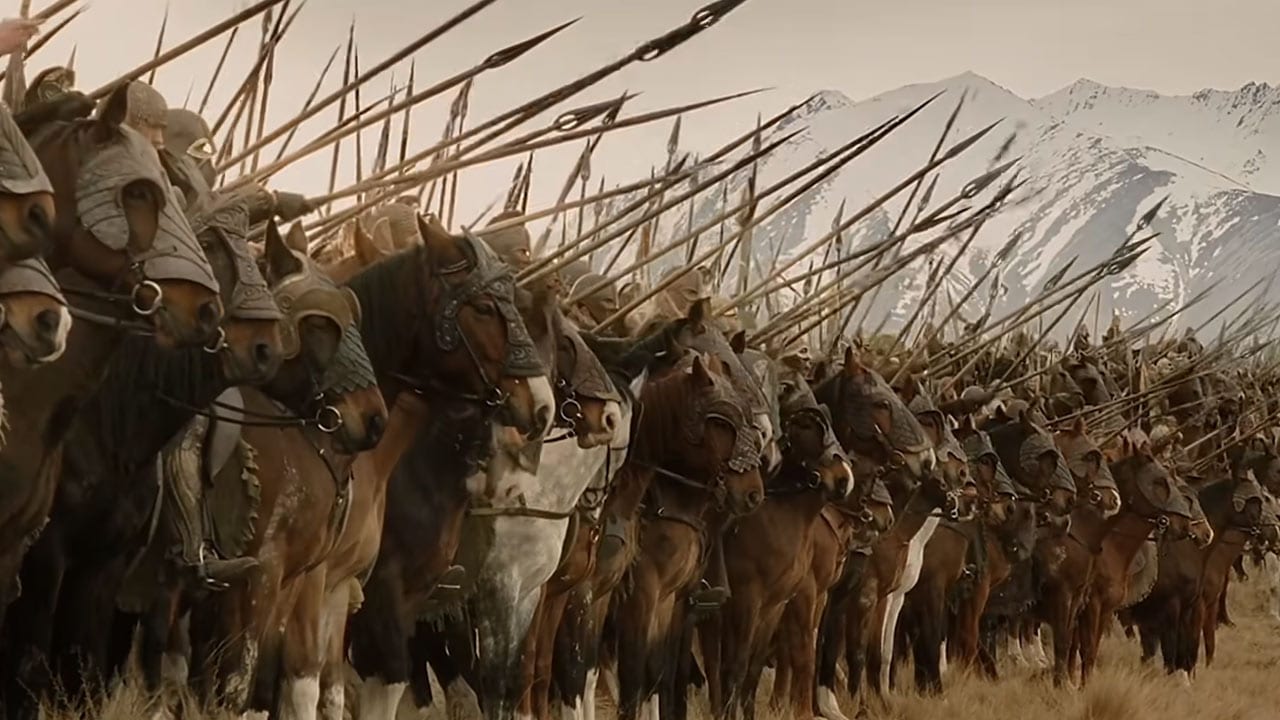 If you’re a fan of the fantasy genre, we’re sure you’ve watched or at least read J. R. R. Tolkien’s trilogy or you are also familiar with the Game of Thrones TV series, an adaptation of the novel from George R. R. Martin’s Song of Ice and Fire series.

There are similarities between them, which will primarily intrigue those of you who don’t know much about them. So here they are:

2. In each of them we have a “chosen” future king who fights on the side of good (Aragorn and Jon Snow),

3. What they have in common is a large army, which gathers around numerous supporters,

4. The Witch King and the Night King, bad guys who command both armies,

5. Beautiful, powerful, and mysterious witches Galadriel (LOTR) and Melisandre (GoT),

6. Eowyn (LOTR) and Brienne (GoT), female characters who struggle with a need to prove themselves as warriors,

7. Two of the bravest characters as Frodo Baggins from LOTR and Arya Stark from GoT, in whom no one believed at the beginning,

8. Every fan adores these two amazing witty dwarves – Tyrion Lannister from GoT and Gimli from LOTR,

11. And finally Sean Bean as Boromir (LOTR) and Ned Stark (GoT) who will experience the same fate in both of them.

In short, that’s it, and if you want to learn more about whether the Game of Thrones is better than Lord of the Rings, or if it is inspired by Tolkien’s trilogy, keep reading.

Is Game of Thrones-inspired by Lord of the Rings?

In one of his interviews, Martin tried to explain what influence J. R. R. Tolkien had on his writing and the creation of his magnificent epic fantasy.

Martin was only 13 years old when he read the Lord of the Rings trilogy. It was incomprehensible to him how a character like Gandalf could die. Impossible, it’s like trying to kill Conan. However, this “violation of the rules” by Tolkien in killing the main characters, as well as the good guys, strongly influenced Martin’s point of view in this genre.

George R. R. Martin realized that there are no obstacles – any character can die, anytime and anywhere. Some will say that he exaggerated because the readers and viewers of the Game of Thrones did not stop counting the corpses until the very end of the series.

Going back in the past, Martin concluded that the world in which Frodo Baggins and Gandalf lived was as cruel as Westeros itself. The question is: if Martin had not read Tolkien’s Lord of the Rings trilogy, would he have even thought of killing Ned Stark or even resurrect Jon Snow, for example.

Realizing that there are no rules of the fantasy genre at all, which cannot be broken, he actually invented his own, whether fans of the series liked it or not.

As much as Martin admired Tolkien, he would say that the idea of ​​the Lord of the Rings has the hallmark of medieval philosophy – if the king was a good man, the country would prosper. From his point of view, it is not easy at all. Tolkien will say of Aragorn, who eventually becomes king, that he was wise and good, but does not give us a bigger picture – what Aragorn did at a time when his people were starving, whether and how he maintained his army, how he collected taxes, and so on.

We can say that in addition to the fact that Tolkien’s trilogy had a profound effect on Martin and the Game of Thrones as well, it also changed his view of fantasy in a way that goes beyond any framework that will limit this genre in any way.

Martin’s opinion should not ultimately affect readers and viewers in a way that they have to choose sides, between the Lord of the Rings and the Game of Thrones. In fact, there isn’t much difference between the considerable number of deaths that shocked Game of Thrones fans and the big surprise of 13-year-old George R. R. Martin when he realized Gandalf wasn’t immortal at all.

Is Game of Thrones better than Lord of the Rings?

No, the Game of Thrones series is not better than the Lord of the Rings trilogy.

Although we are talking about stylistically different works, both of them won the hearts of fans of the fantasy genre and became a real symbol of fun in general. Both the visual spectacle of The Lord of the Rings as well as the raw historically inspired story of the Game of Thrones have remained notable in their own time.

Sometimes the advantage is on the Lord of the Rings side while on the other hand, we can opt for Game of Thrones. Well, let’s try to explain it better.

Considering that The Lord of the Rings contains an abundance of characters, such as Boromir, Elrond, Arwen, Legolas, and even Gandalf, it is unusual that the story revolves mostly around Frodo and Aragorn.

In the Game of Thrones series, we follow the story through the unique background of a much larger number of characters in which we meet their own stories, which gives more dynamic to the entire series.

Lord of the Rings reigns supreme when it comes to the spectacle of the environments and the special effects, which nicely blend live-action and computer graphics. We also have to remember that the Game of Thrones came along by nearly a decade after the Lord of the Rings.

The Game of Thrones series stands out to a large extent for its particularly dark and tragic events, which are a kind of antithesis to the Lord of the Rings trilogy, which makes the whole story more dynamic and attractive, reflecting our own history.

Indeed, many events, such as the Red Wedding, have been inspired by real dark moments in human history – especially medieval ones.

Although Game of Thrones captivates the audience with an emotional, although realistically darker plot, there is still room for optimism – another one point for the Lord of the Rings trilogy. Regardless of the orcs, the big monster spiders, and the dark sky of Mordor, it all seems like a cartoon atmosphere in which good always defeats evil.

Friendship, perseverance, and strength from Lord of the Rings are what we choose because real life is cruel enough so we do not need a bunch of dead people coming from George R. R. Martin.

Despite that, we have wizards, elves, and dwarves in Lord of the Rings, a beautiful world of fantasy, the Game of Thrones has gone much further to modernize it. So we got in one place: dragons, ice zombies, shadow babies, giants, tree gods, and fire-summoning witch cults. A wonderful idea, isn’t it?

If we are talking about using language in the books/films, Peter Jackson rules with his scenes of spoken Elvish and the Dark Tongue of Mordor. Besides the master of linguistics J. R. R. Tolkien, Mr. Martin can boast of just a few Dothraki and Valyrian phrases.

As for the characters, Game of Thrones is definitely the winner in this category. While the good guys of Lord of the Rings have only a few flaws and dark moments from the past, Game of Thrones abounds with characters of different preferences, qualities, and their constant struggles with themselves. Their good guys thus become antiheroes with a multitude of flaws, which gives a much more interesting story.

When historical fiction is mixed with a fantasy we get an interesting story, but sometimes viewers (and readers as well) just need a simple story about good against evil. Precisely for this reason, the original Star Wars became a cultural phenomenon, which can certainly be said for Lord of the Rings as well.

Sometimes we want to go to a deserted island to get away from everyone and everything, to be filled with energy and peace – the first such choice would surely be some of the amazing picturesque landscapes of Lord of the Rings. However, besides those beautiful places, we like to see a little more about the history, religion, and culture of a nation.

This is exactly what we got by discovering the story of the Targaryens, the First Men, the Andals, and the whole culture of Westeros and Essos. Therefore, well done again Mr. Martin.

If someone asked me what I liked most about Lord of the Rings (especially in the movies) the answer would be the beautiful battle scenes (Helms Deep or Battle for Minas Tirith). You’ll agree, these scenes with great special effects are breathtaking.

Unfortunately Game of Thrones was not lucky enough to be shown on the big screen, but we will still remember Blackwater Bay and Battle of the Bastards.

Finally, we recommend you take a look at or read these amazing masterpieces (if you haven’t already) which justifiably belong to the favorites of the fantasy genre. For that reason, we just wanted to tickle your imagination a bit about the similarities between them. The rest is up to you.

You can watch Game of Thrones Season 1