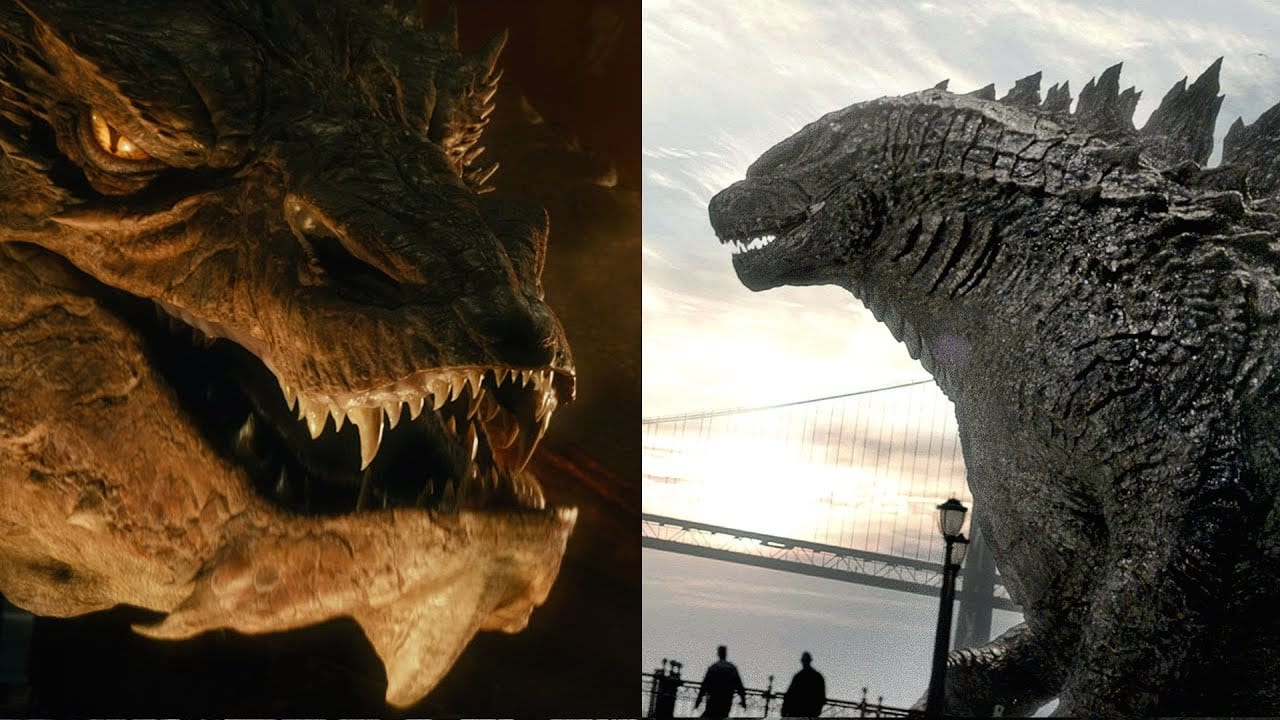 No epic tale of fire-breathing Dragons, Dwarves, Hobbits and Monsters will be complete without the mention of Smaug and Godzilla. Smaug is one of the main characters in The Hobbit

and other illustrations by John Howe

. Godzilla on his part, was the King of Monsters who has been portrayed in different ways in 32 Godzilla movies debuted by Toho

Several filmmakers, video game makers and storytellers have told great tales about these out-of-the-world characters and the big question before us is: Smaug vs Godzilla: Who would win in a fight?

In a fight between both of them, Godzilla will be the winner! Apart from being bigger than Smaug, he has above animal-level intelligence and has awareness of different tactics. Also, Smaug’s fire breath doesn’t harm Godzilla (he even survived the lava in a volcano!).

In the rest of this article, we will explore both characters in terms of their attributes as portrayed in the different illustrations of them to buttress our position and make you agree with us. So, let’s roll.

How powerful is Smaug?

Smaug is said to be one of the greatest dragons to have inhabited the Middle Earth. He was a fire drake

. The great wealth of the Dwarves

in the Lonely Mountain

were able to wake him from hibernation.

We have explored the strength of Smaug’s persona with various indices. These include:

in The Atlas of Middle-earth

, he was said to measure about 59ft (18 meters) in length. This claim is however non-canonical. In the Secret Tunnel

, Tolkien said that Smaug was so big that a 5ft tall door and a passage that was wide enough for three people to pass was too small for him even at a young age and that when he was grown, only the tip of his nostrils could fit into the passage.

Smaug was a fully-grown dragon. He was very massive and possessed enough power to crush a large stone with ease. His enormous strength was seen when he attacked the Lonely Mountain.

He possessed the ability to breathe out fiery-hot flame and streams of vapor from his nostrils and mouth. As seen in The Hobbit, his body was so fiery that he glowed in the dark labyrinths of the Lonely Mountain.

He had a very keen sense and his mind was dangerously sharp. His knowledge was more or less encyclopedic and he knew so well about his treasure that he immediately knew when Bilbo stole a single cup when he first visited his lair. He was agile and quick and could dive at high speeds and easily leap over objects despite his large size.

He could easily defend himself as his reddish-gold scales made him impervious to the many weapons that he was attacked with. However, his underbelly was soft and quite vulnerable and he smartly protected himself against this weakness by sleeping with pieces of gold and other jewels covering his body. His chest was bare on the left side. Bilbo discovered this physical weakness and told the Dwarves about it. An ancient thrush overheard Bilbo telling the Dwarves and also told Bard

into this bare patch and defeat Smaug.

Smaug’s persona was that of an extremely sadistic, violent, psychotic, arrogant, confident, cruel, and greedy (he possessed a great desire for gold) character. He often boasted to Bilbo that he was impregnable and superior.

He greatly despised the dwarves seeing them to be pathetic and weak creatures far beneath him in rank. He talked poorly of Thror

and didn’t show any remorse when he slaughtered the dwarves and claimed their kingdom.

How powerful is Godzilla?

Several reviewers and illustrators have described Godzilla as the King of the Monsters. In exploring how powerful he really is, we must say that he is really a handful as there are several versions of him portrayed in movies. However, the consistent thing about the Godzilla character in the different illustrations is his basic design, use of nuclear weapons and his atomic breath. In his many descriptions and reinventions by filmmakers, he cannot be said to be truly either a hero or a villain but what simply stands out is his physical superiority over many of his rivals.

Godzilla has been severally described with such names as Gojira, Alpha Predator, Species 5146_Adam

We have also explored the strength of Godzilla’s persona with the same indices used on Smaug. However, we will be limiting our critique to the MonsterVerse

edition which we believe will be a good competitor to Smaug.

As we said earlier, several versions of Godzilla exist. In The Atlas of Middle-earth, he was said to be towering from about 160ft (Showa)

The MonsterVerse version of Godzilla has a square-shaped face, had a broad neck and had gills on his sides. His other reincarnations also had gills. Tomoyuki Tanaka

, described the air holes on the necks of Godzilla suits in the Showa era as gills. However, the computer-generated edition needed no such accommodations. He has yellow eyes and small teeth which are not well lined up as previous editions.

The MonsterVerse edition of Godzilla has the trademark atomic breath capability. This capability exemplifies his immense power against his enemies and he used it as a last resort weapon during his fight with the MUTOs

. He also used it frequently in his battle against King Ghidorah

.  His bio-nuclear circulatory system is activated whenever he is threatened and he draws energy to charge his atomic breath.

He is also able to communicate with Mothra

over long distances via sonar because of the symbiotic bond which they share. The MonsterVerse Godzilla also possesses a nuclear pulse capability which he uses in his final battle with MUTO Prime

. As Muto Prime is stunned by ORCA, Godzilla lifted him to his back and releases a huge load of atomic energy shockwaves from his dorsal plates that were shattered.

The MonsterVerse Godzilla is also highly durable. He was able to survive the bombing of Castle Bravo by the 15-megaton hydrogen bomb. He also resisted the missile and artillery attacks of the United States Military until one of the missiles hit him on the gills making him shrug in pain and plunge through Golden Gate Bridge

severely weakened him. He quickly retreated to his lair to rest and re-energize from the surrounding radiation.

The MonsterVerse Godzilla also features amphibious lungs and gills which allow him to breathe well whether underwater or on land. His lungs and gills fold up whenever he is on land and make him a more versatile fighter. He is also a good swimmer and can swim at a speed of 40 knots. His good swimming skills helped him elude the United States Navy, his large size notwithstanding.

described him as a Protector and Guardian of the Ancient World. It described him as being inquisitive, slow and graceful when not in battle mode. In Legendary Pictures’ Godzilla, Godzilla was portrayed as a territorial animal. Ishiro Serizawa

suggests that he is a powerful force that tries to restore balance in Nature and the earth.

He is portrayed as a good character that is not on the path of being outrightly hostile to humans. He remained cool and unperturbed even he was surrounded by military escorts on his way to Boston to face Ghidorah. In the Titans

he good enough to keep the other Titans safely away from cities and thus was able to prevent further destruction of humans and their cities.

Who Would Win in a Fight: Smaug or Godzilla

Having explored the worlds of both Smaug and Godzilla, we are proud of maintaining our stance that Godzilla will be victorious in a fight with Smaug. Though we agree the battle will be a keenly contested one that will be a marvel to behold, we are quite convinced that Godzilla will carry the day considering his larger size, intelligence, superior bio-nuclear capabilities and strength of character.