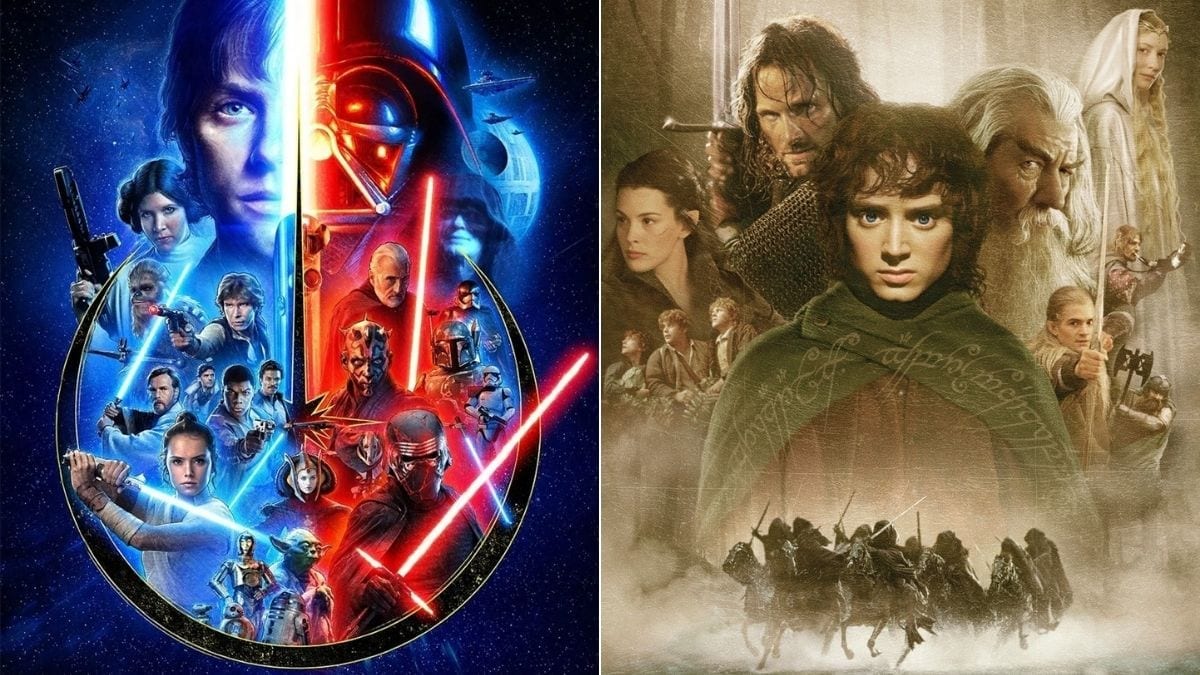 Star Wars and The Lord of The Rings are two of the biggest movie franchises of all time. They have been compared countless times, and the one question, “Which one is better” has always been around.

Star Wars and The Lord of the Rings are two of the most popular movie franchises in history, and it is very hard to compare which one is better because they both had some amazing box office and acclaimed success, as well as influence on the whole world.

Both franchises have made global blockbuster movies that broke numerous box office records, and that’s about the only common thing about these two. The Lord of The Rings series is based on one of the highest-selling book franchise of the same name written by J. R. R. Tolkien.

The book series pioneered the fantasy genre while the Star Wars is not based on any book series, but instead, George Lucas wrote and directed the movie. Even Lucas did not have such high hopes for Star Wars, let alone the film studio.

Why Star Wars is great

Both of these films are probably the best films in their respective genre. Star Wars pioneered an era of science fiction; its characters like Luke Skywalker and Darth Vader have a coveted spot in pop culture.

Both of them are great in their accords. Star Wars is loved by many sci-fi geeks worldwide. Star Wars has one of the biggest and most dedicated fandom.

Why the Lord of the Rings is great

Lord of the Rings films as a whole is considered a pinnacle in high fantasy filmmaking, it is adored by many adventurous, fantasy lovers who are more into books.

Peter Jackson directed The Lord of the Rings; he realized that the whole story could not be fit into a single movie, he pitched it as a trilogy, and the entire thing was shot simultaneously in fourteen months.

Upon its release in 1977, Star Wars took the world by storm, surprising everyone by breaking all-time box office records. It grossed $410 million and became the highest-grossing movie of all time.

After adjusting for inflation, its net gross is more than $3 billion, more than the current record holder of the highest-grossing film. After the success of Star Wars, Lucas started to capitalize on the success and made two sequels.

The trilogy was a massive success and it is considered one of the best movie trilogies of all time. In 1999 the first film from the prequel trilogy was released, which was set years before the events of the original Star Wars.

This trilogy was not very well received by the fans and the critics alike; it seemed more like a cash grab. Some fans go as far as disclaiming the whole trilogy.

In 2012 Lucas sold his Star Wars empire to Disney. They announced another trilogy, serving as the sequel to the original trilogy.

The first film from that trilogy “The Force Awakens “was released in 2015, grossing over $2 billion and becoming the highest-grossing film from the franchise. The next two films could not carry the momentum set by the first film.

Fans and critics did not like them much, but they made good money at the box office. Together these films have grossed over $10 billion, making Star Wars the second highest-grossing film franchise ever.

Together Lord of the Rings trilogy grossed over $2.9 billion with a combined budget of $281 million.

The films were equally loved by critics, who praised the series for being consistent. Jackson planned another trilogy based on The Hobbit written by Tolkien; it was a prequel to The Lord of the Rings.

However, things did not go as smoothly as the first time around. The Hobbit trilogy also grossed over $2.9 billion but with a budget of $655 million.

Just like box office, the first Star Wars “A New Hope “film won big times at Oscars, getting ten nominations and securing six wins. The second film, “The Empire Strikes Back” received three nominations and winning one, taking the series total to seven.

Lord of the Rings had a similar headstart at Oscars with Fellowship of the Ring, getting thirteen nominees and winning four awards. Two Towers was nominated for a total of six awards from which it won two awards.

The first two Lord of the Rings films have the same number of awards as the first Star Wars film, but everything changed when the concluding film stepped in the Oscars race.

In the historic sweep at 76th Academy Awards, The Return of the King won eleven out of eleven awards it was nominated, tallying is sum way over Star Wars.

Furthermore, The Return of the King is still the only fantasy movie ever to win the “Best Picture” Oscar. Usually, fantasy, action, sci-fi & superhero movies are ignored by the academy for the top prize.

In the category of awards, Lord of the Rings soars past the Star Wars. The critical score of the films also tells a similar story.

Star Wars vs The Lord of The Rings: Which one is Better

Star Wars has a massive fanbase compared to Lord of the Rings. Star Wars franchise is worth $70 billion. It’s the highest-grossing media franchise based on a film series, 60% of its revenue comes from merchandise sales, and its merchandise such as lightsabers and action figures are trendy among kids.

Lord of the Rings franchise is worth over $19 billion, it is the second highest-grossing media franchise based on a novel, and most of its revenue also comes from books.

Star Wars is very popular among sci-fi lovers. It is considered one of the best sci-fi film series of all time. It defined the childhood of generations and has a robust nostalgic factor that Disney keeps capitalizing on with their multiple theme parks all around the world, anthology films, sequels, and TV series.

Its the nostalgia that forces people to watch a new star wars film even though it has been critically panned. That was the case with “Rise of Skywalker”, even though it had the lowest ratings among the Star Wars film but still grossed more than $1 billion.

Critics and filmgoers love Lord of the Rings for a simple fact that these movies are very well made and cohesive, everything end is tied. It shows many breathtaking landscapes, and the film’s original score, composed by Howard Shore, puts everyone in the fantasy world.

There was not one rough thing about it; that’s part of the reason why it has the record for the largest sweep in the history of Oscars. It is also the most nominated and awarded film series ever.

Even with all that acclaim, Lord of the Rings cannot match the Star Wars’ money. It has an endless number of exciting characters that were made into merchandise from Darth Vader to baby Yoda, stormtroopers, all kinds of robots, and lightsabers; things don’t end here; you can buy death star, and Falcon millennium as well.

To get exposure to new generations, they keep making more films. Now Star Wars has a fanbase in roughly three generations.

By comparing both of these films, we can see that Star Wars edges out in box office gross and Lord of the Rings wins in awards and critical acclaim with a landslide.

However, these achievements are impressive but irrelevant to the fans of both of the series. For a fan or a consumer, it is all about the feelings of awe and inspiration they get during watching the Lord of the Rings or the sense of excitement and rush while watching Star Wars.

Both of these films have a completely different audience. Sci-fi, space action lovers would prefer Star Wars, while adventurous and fantasy lovers would go for Lord of the Rings. So, which do you like the most?