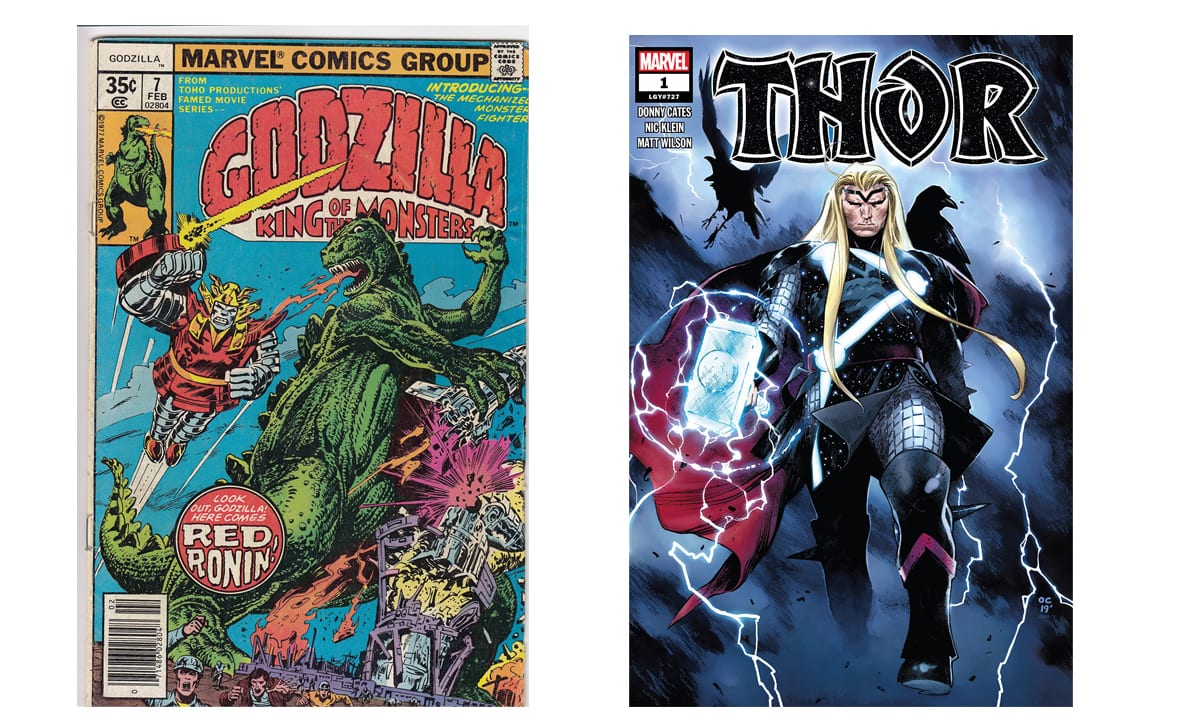 In one corner we have one of the founding members of The Avengers, Thor. He is the powerful Asgardian God of Thunder, wielding the powerful hammer which allows him to fly and control the elements and use them to fight his enemies. In the other corner of this massive ring, we have Godzilla, the King of Monsters, a giant kaiju or creature from the sea that wreaks havoc on cities with his sheer size and atomic beam he spews from his mouth.

Both characters are strong, powerful, skillful in battle, and have extraordinary powers. But which would win if faced against each other. Let’s put them to the test and find out.

Although Godzilla conquers in height and weight, it is Thor who would come out as a winner because of his speed, skills, battle tactics, stamina, and weapons. Godzilla is resilient and immune to nuclear-level weapons, but Thor has physical and environmental powers that would be the end of Godzilla.

So now that we know who would win, let’s take a look at each character and their powers and see blow by blow why we think Thor would win in this battle. We will go through some of the best skills and battle techniques that each character could use when facing off with their opponent.  Who do you think would win?

How powerful is Thor

Before we get into the powers that Thor possesses it’s important to note that he is the Thunder God sent down to earth by his father Odin to live a normal life. Before he knew he was a powerful God, he thought of himself as just a regular guy. As a doctor, he possessed the skills of knowledge to heal the sick. This mental ability and empathy for life was core to his power even before his actual superpowers were revealed to him (“The Saga of Thor” 1983).

But when Aliens attack earth, he finds the hidden hammer and the truth that he is actually a Thunder God put on Earth by his father. But instead of returning to Asgard his home planet, he disobeys his father and stays as he fell in love with Jane Foster, a nurse he works with. Throughout his life, he battles many monsters, aliens and enemies, and even his own adopted brother Loki.

Thor is the son of the god Odin and Goddess Gaea, has an incredibly long life, and has been alive for Millennium. The people of Asgard consume golden apples to increase their lifespan and due to his lineage, Thor is the strongest of the people of Asgard. He has incredible strength and can lift objects like the Midgard Serpent which is almost the size of the entire planet earth and 20 times heavier ( Thor Vol.1 #327 Jan. 1983).

Thor also when pushed to the limits has the ability to go into Warrior’s Madness, which allows him to increase his powers by tenfold much like having a rush of adrenaline. There are a variety of powers that Thor possesses that make him not only one of the strongest superheroes in the Avenger group but in existence.

Thor can withstand injuries and defend against attacks like bullets, energy blasts, magic spell,s and even diseases and viruses from Earth. He has heightened senses that allow him to track objects faster than the speed of light as well as hear things from thousands of miles away.

He can travel through time, regenerate wounded or injured body parts, has exceptional speed and strength using his hammer not only as a shield but throwing it to subdue his enemies. His stamina is so strong that he can go months into battle without stopping for rest or sustenance. Most importantly though, being a God of Thunder, he can summon great power from the environmental forces to aid him in his fight. Using his hammer and the elements like snow, wind, water, and lightning he can destroy entire buildings or command tornadoes.

Whether it be close hand to hand combat or wide-scale chaos, Thor is exceptionally capable of single-handedly dealing with his enemies ( “Alone Against the Celestials” Thor 388 February 1988). Now let’s take a look at Godzilla and his powers.

Godzilla, unlike Thor, is not a God, nor does he resemble anything human-like. Instead, he is a massive prehistoric sea creature that has been awakened by the nuclear radiation Physically massive and resembling a dinosaur or dragon type creature, Godzilla has scaly lizard-like skin, walks upright, and has a long tail.

Unlike Thor, Godzilla doesn’t have any real allies or allegiance to people or property. He doesn’t scour the earth to eat people or gain any type of wealth or power. He is simply craving radiation and destroying anything in his path. The main strength of Godzilla is his overall muscular body size and his atomic heat beam which spews nuclear radioactive energy using electro-magnetic force from his body. The deadly beam and his overall size are a double weapon for his enemies.

Since Godzilla is so massive and his body is fueled by radiation and nuclear energy, it is safe to assume that regular weapons of mass destruction have little effect on him( Godzilla 2000

(1999). ). He is also reptile-like so extreme cold or hot conditions, as well as both land and water, are no hindrance for Godzilla and he can conquer many tough conditions (An Anatomical Guide to Monsters, Shoji Otomo, 1967).

And because Godzilla has an electromagnetic beating power force, he has a shield that can withstand much damage without leaving too much vulnerability. The size and weight of Godzilla seem to change as the series progresses but let’s assume he is about 300 meters or almost 1000 feet high and ways about 90,000 tons based on the recent films (Godzilla: Planet of the Monsters

Thor vs Godzilla: Who Would Win

The main part, who would win, why, if they clashed in comics say in your own words how it went, and also add those links from Amazon – always try to find examples from comics if possible,

The fight would definitely be long and brutal. In the end, it would really depend on stamina and strategy versus sheer strength.

Godzilla would obviously start strong as his outer skeletal surface is hard, impenetrable, and immune to worldly weapons. You can’t just shoot Godzilla or try to injure him. Nuclear energy just makes him stronger.  Similarly, since he has the nuclear breath that destroys anything it touches, Thor would have to be quick to escape, avoid and block that beam with his hammer.

In terms of strength, both Thor and Godzilla seem strong. Thor is able to lift and throw about 100 tons and was able to wrestle and overpower the World Engine (World engine Epic Collection: Thor, Paperback June 2018).

But Godzilla weighs over 90,000 tons and can throw things heavier than him which was shown when he threw Super Mechagodzilla who weight over 150,000 tons. So strength-wise alone, Godzilla could over power Thor.

However, Godzilla has some weaknesses that might limit his success against Thor. Most notably speed and his need to hibernate to regain energy. Although earlier versions of Godzilla were weak to electricity, over the decades Godzilla has become more resilient to it. Instead wearing Godzilla out would probably be the best way to kill him.

Rather than is the external body, his mind and heart are the most vulnerable parts of his body. And though nuclear weapons might not work, heavy objects and constant attacks on him using environmental conditions could weigh him down. Thor could use his stamina to keep all elements like tornadoes, lightning, and wind to constantly attack Godzilla. As well as knocking over buildings, boulders and large objects onto Godzilla to decrease his strength.

Thor’s hammer also has the ability to take energy, absorb it and send it back, meaning if Godzilla shot a beam of his nuclear breath towards Thor, he could deflect it back and attack Godzilla with his own weapon.

Thor also has a range of powers like speed, vision, hearing sense, and stamina to attack Godzilla in a myriad of ways that would leave Godzilla spinning. Godzilla would not be able to keep up regardless of his weight, strength, or power.

And as a last resort, the ultimate reason Thor would beat Godzilla is he could use the God Blast which is the most powerful blast of concentrated energy any superhero could ever possess or use.

Both are strong and powerful characters that deserve the titles they have but between the King of Monsters and the God of Thunder, it’s the God who can do many things at once and can launch a powerful attack on the monster that in the end would leave him destroyed. It would be a long, drawn-out and vicious fight that might destroy entire worlds but in the end, Thor would be the last one standing.

Look at this literature of Thor