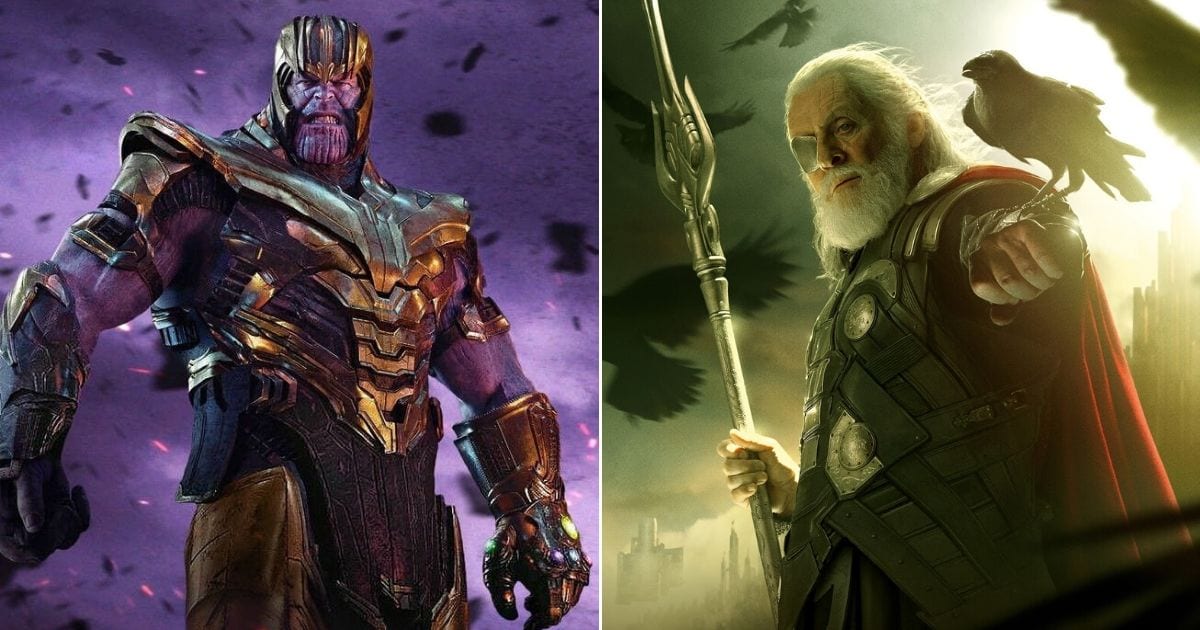 Thanos is one of the strongest villains in Marvel Universe, but still, there are some stronger beings than him, and one of them could be Asgardian god Odin. So, was Thanos afraid of Odin? We will let you know in this article.

No, Thanos is actually not afraid of anyone, but he sure did avoid Odin.

Thanos has fought with the the strongest beings from Marvel Universe, sometimes he won, sometimes he lost, and sometimes he even died, but even death can’t stop Mad Titan, and as such, he is not really afraid of anyone, but there are some characters which he prefers to avoid, and Odin is one of them.

Thanos and his powers

Thanos was born on Saturn’s moon Titan. At birth, his mother was shocked by his appearance and tried to kill him, because she believed that her son would destroy whole life in space, but she was stopped by A’Lars, Thanos’ father.

During his school years, Thanos was a pacifist and played only with his brother Eros and pets.

By adolescence, Thanos became fascinated with nihilism and death, adored, and eventually fell in love with the physical embodiment of death, Miss Death.

As an adult, Thanos increased his physical strength and power through his superior scientific knowledge. He also tried to create a life for himself by adopting many children as well as becoming a pirate.

He found no fulfillment at all until he is visited by Miss Death, for whom he kills his descendants and his pirate captain.

Wanting to impress Miss Death, Thanos gathers an army of infamous aliens and begins a nuclear bombing of Titan that kills millions of members of his race.

Seeking universal power in the form of a Cosmic Cube, Thanos travels to Earth. Before landing, his ship destroys a nearby car while the family testifies to his arrival. Without Thanos ’knowledge, two family members survived in the vehicle: the father’s spirit was preserved by the Titan cosmic entity Kronos and given a new form of Drax the Destroyer while the daughter was found by Thanos’ father and raised to become the heroine of Moondragon.

Thanos eventually finds Cube, and also attracts the attention of Miss Death. Ready to become omnipotent by the Cube, Thanos then rejects Cube.

He then imprisons Kronos and angers Cree heroine Captain Marvel, who, with the help of a superhero team, Avengers and a supercomputer on Titan, eventually manages to defeat Thanos by destroying the Cube.

Thanos later received the help of Adam Warlock in the war against Magus and his religious empire. During this alliance, Thanos forges a plan to reunite with the Miss of Death, and secretly steals the energy of Warlock’s Soulstone, combining it with the powers of other Infinity Stones to create a weapon powerful to destroy the star.

Warlock summons the Avengers and Captain Marvel to stop Thanos, although the plan is thwarted when Thanos kills Warlock. Titan regroups and captures the heroes, who are released by Spider-Man and Thing.

Thanos was finally stopped by Warlock, whose spirit emerges from the Stone of the Soul and turns Mad Titan into a stone. Thanos’ spirit eventually reappears to follow the dying Captain Marvel’s soul into the realm of Death.

Thanos is a mutant member of a race of superhumans known as the Eternal Titans. He possesses abilities that are common to all the Eternals but are enhanced to a greater degree by the combination of his mutant-eternal heritage, bionic amplification, mysticism, and the power given to him by the abstract entity, Death.

Demonstrating tremendous superhuman strength, speed, endurance, immortality, and inviolability among other qualities, Thanos can absorb and project vast amounts of cosmic energy and is capable of telekinesis and telepathy.

He can manipulate matter and live indefinitely without food, air, or water, cannot die of old age, is immune to all earthly diseases, and has a high resistance to psychological attacks.

Thanos is also a trained fighter, trained in the war on Titan. Thanos is a supergenius in almost all known fields of advanced science and has created a technology that far surpasses what is found on modern Earth. He often uses a transport chair capable of flying in space, projecting a force field, teleporting, traveling through time, and moving through alternate universes.

Thanos is also the chief strategist and uses several spaceships, at least three under the name “Sanctuary”, as the basis of operations.

Odin and his powers

According to Norse mythology, Odin is the son of Bor (father, one of the first Asgardians) and Bestla (mother, a frost giantess), and the full brother of Vili and Ve.

With the aid of his brothers, a young Odin defeats the fire demon Surtur; later, Odin reveals that his brothers were killed by Surtur, but gave their power to Odin. Later he imprisoned Surtur inside the Earth.

Odin thereafter became ruler of Asgard, where he received the epithet of All-Father, and eventually fell in love with the elder goddess, Gaea, by whom he is the father of Thor. After Thor’s birth, Odin returns to Asgard, where his wife, Frigga, acts as Thor’s mother.

Odin is also the adoptive father of Loki, a child of Giant ancestry whose father King Laufey is killed by Odin in battle: adopted in a deal with Bor’s spirit, unaware of Bor’s intention that the child would bring about Odin’s downfall.

Despite Odin’s intentions, Thor and Loki become bitter enemies. Odin also was the father of Balder from Frigga.

As King of the Norse Gods, Odin possesses vast strength, stamina and durability far greater than that of a normal Asgardian, along with resistance to all Earthly diseases and toxins, incredible resistance to magic and, as a courtesy of the Golden Apples of Idunn, a greatly extended lifespan.

Odin has all the abilities of his son Thor but to a much greater degree. Odin is capable of manipulating the Odin Force – a powerful source of energy – for a number of purposes, including energy projection; creation of illusions and force fields; levitation; molecular manipulation, communicating telepathically with other Asgardians even if they are on Earth and he is in Asgard, hypnotizing humans; channeling lightning to Earth from Asgard, controlling the life forces of all Asgardians, and teleportation.

The character has also used the Odinpower for greater feats such as transporting the entire human race to an alternate dimension; stopping time; pulling the remains of distant planets down from outer space to crush his foes, compressing the population of an entire planet into a single being, the Mangog and then recreating the race and taking a soul away from the arch-demon Mephisto.

The Odin Force makes Odin capable of destroying entire galaxies, allowing him to engage entities such as Galactus on their own terms. In some stories, Odin has been portrayed at a universal or even greater scale of power.

In battles against opponents of similar power, Odin carries the magical spear Gungnir (“The Spear of Heaven”), an artifact made of the metal uru, that can be used to channel the Odin Force. Even without the Odin Force it can still match Thor’s hammer in battle. Once a year, during the Asgardian winter, Odin must undertake the Odinsleep for 24 hours to regenerate (and is closely guarded as he is vulnerable during this period), although he can be wakened by potent spells, such as those of Karnilla the Norn Queen.[62]

Odin is also a master tactician and schemer, and has prevented Ragnarok,[63] and planned for centuries for the coming of the Celestial Fourth Host.[64][65] The character also on occasion uses the eight-legged steed Sleipnir and the enchanted ship Skipbladnir, which can navigate the “sea of space” and be shrunk to the size of a toy.

Was Thanos Afraid of Odin?

Even thou we think Odin is stronger than Thanos, and probably Thanos thinks the same, the Mad Titan is not afraid of anything and anybody.

On the other hand, he is very smart and cunning, so he probably does avoid conflicts with Odin, but if he sees no other way, he will certainly not run away from the fight.

Odin – which is considered to be a specific tier of power in Marvel, just above the level of Thanos – has shown as being able of defeating Thanos in battle. Although Mad Titan didn’t back off in the battle (which is specifically depicted in the images, and just proves he really isn’t afraid of anyone), the fact is that Odin was shrugging his attacks off with ease, while Thanos was notably looking worse in that fight.

But just to show how strong Odin really is, Thanos was prepared for the battle, had the Silver Surfer helping him, and was giving all in, while Odin was being pretty casual and merciful, to say the least.

Titan, you are more worthy a foe than I anticipated.

Meaning you are shocked that I still remain breathing.

Precisely. But let not this compliment be taken in any erroneous manner. Your doom is assured. Scientifically acquired might cannot hope to stand against my own divine mystic power.

Strength and energy are the same despite its title or claim, Asgardian. Your supposed heavenly status impresses Thanos of Titan not in the least.

, and see that even thou Thanos is clearly weaker then Odin, he is not afraid of him, not in the least.