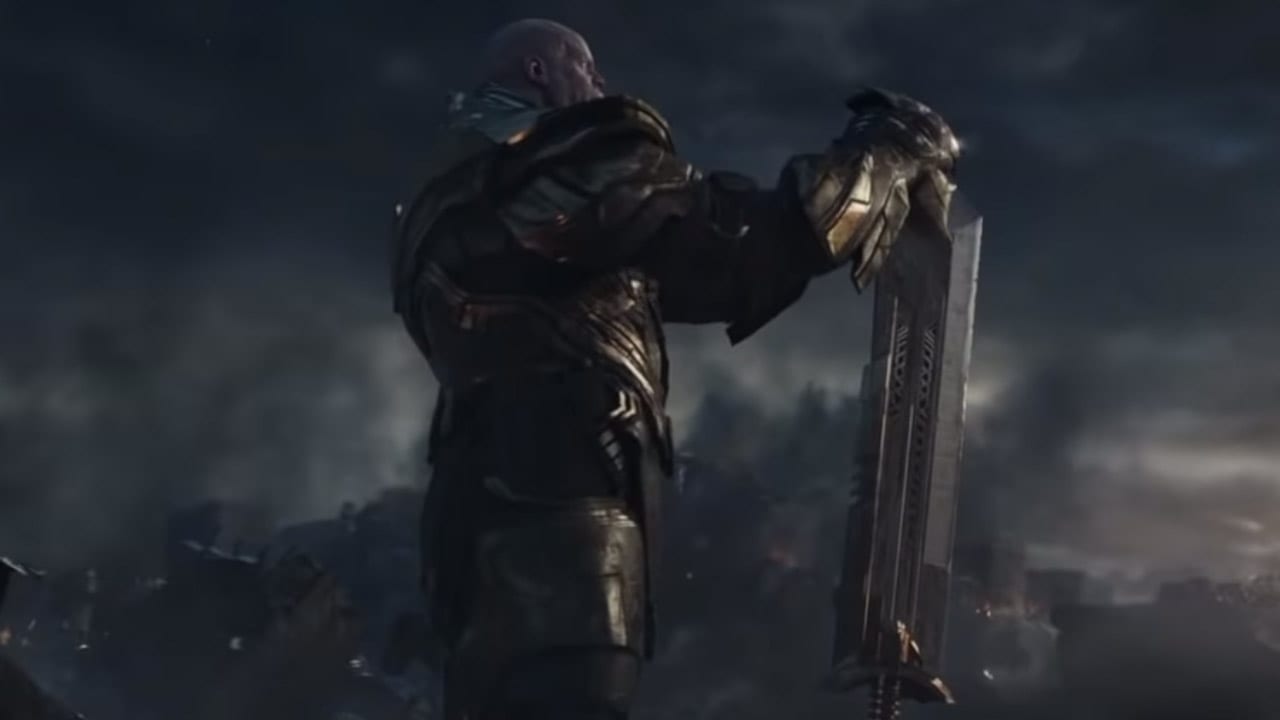 Thanos was the most anticipated big villain of the Marvel Cinematic Universe, with his appearance being teased as early as the end credits of The Avengers. Ever since the end credits of The Avengers: Age of Ultron, Thanos was linked with the infinity stones. However, during the final battle of Endgame Thanos is wielding a different weapon, his double-edged sword. This sword has captivated the fans from its first appearance because not much is known about it; mainly what is it made of.

Besides the obvious question of what the sword is made of, there are many other that puzzle fans like who was Thanos able to damage Captain America’s shield and how was Scarlet Witch able to break it. If you would like to know more about this mysterious weapon keep reading.

What is Thanos’s sword called?

We don’t know much about this sword and that includes the name as well. The sword is only referred to as the Double-Edged Sword.

It was Thanos’s primary weapon during his time as a warlord. Later Thanos exchanged the sword in favor of the infinity gauntlet. The sword was designed as a melee weapon that Thanos uses to deflect any incoming attacks.

What is Thanos’s sword made of?

There is almost no material that we can go off to answer this question. The movie doesn’t focus on the sword much besides the battle scenes so the only confirmed material we have is a few statements made by Kevin Feige.

However, this didn’t stop the fans from theorizing about the origin of the sword. Many fans firstly looked to Vibranium. Vibranium was established in the Black Panther movie as the strongest material known in the Marvel Cinematic Universe.

Due to this fact, many assumed that this was the right answer and even argued that the act of destroying Captain America’s shield was simply due to the fact that the sword has a sharpened blade.

Despite this theory standing strong in the beginning, it was later disproven. Many fans pointed out that we have already seen Captain’s shield damage with a Vibranium weapon during The Civil War.

However, the Black Panther’s suit couldn’t cause any damage beyond a few scratches that are no match to the damage the sword dealt out.

Another point that disproves this theory is the fact that Corvus Glaive, Thanos’s adoptive son, possesses the weapon that managed to go right through Vision’s body during their first encounter.

Even though it makes sense that Thanos would provide the best weapons for the member of The Black Order, who were his most elite assistants in search of The Infinity stones, it does not make any sense that he would not have the same weapon himself.

If you are only going from the lore presented in the movies, you would hit a wall at this point. If you look into the comic books a bit more you will stumble upon Uru.

Uru is a godly metal fairly well known in the universe. It is forged in the Nidavellir. The owners of the material are the dwarves.

In the comic books, it is described as a metal derived from the first moon in the existence of the universe. It possesses extreme strength and keeps enchantments in well, making it the perfect material for Thanos’s weapon. It’s known that the more enchanted Uru gets the more durable it will be.

This material is so strong that the only way to melt is harnessing the power of a dying star. Besides Thanos’s sword, Uru was also used in the creation of Thor’s hammer Mjølnir and his ax Stormbreaker and many more in the comic books such as Odin’s Odinsword and Heimdall’s Biofrost sword Hofund.

This theory is also backed up by the fact that Thanos is familiar with Eitri. We know that he was forced to make the Infinity Gauntlet for him, after which he killed the rest of the dwarves, leaving Eitri the last survivor of his race. This means he could have possibly made the sword for him as well.

This was the most accepted theory for a while until the fans pointed out the Celestials as possible makers of the sword.

Celestials are ancient beings that are well known for their powerful matter and energy manipulation energy. They were pre-Asgardian beings, humanoid in anatomy but much larger.

They are mostly extinct and the Cinematic universe doesn’t deal with them. However, we are introduced to one of them, Ego, Peter Quill’s biological father.

The Celestials are known as the first masters of the Infinity stones. This trait is also exhibited by Peter Quill, who is considered a hybrid Celestial, with the Power Stone.

We can briefly see how the Celestials used the Power Stone to place judgment upon entire civilizations and wipe them out by touching the stone to the surface of their planets in The Guardians of the Galaxy vol.2.

It would make perfect sense that Thanos’s obsession with the Infinity Stones led him to the Celestials. His origin is heavily intertwined with the celestials because Thanos believed they will most successfully lead him to the stones.

Due to this, it would make sense that if Thanos found any kind of Celestial weapons during the quest to find the Stones, he would not leave it behind but rather master it to aid him in his endeavors.

Is Thanos’s sword stronger than Vibranium?

One of the most captivating scenes in the Endgame movie is the fight between Captain America and Thanos. After Thanos overpowers Thor and all hope seems lost, Steve emerges with Mjølnir and attacks Thanos.

This earns a reaction of amazement from everyone watching including Thor himself. The battle continues for some time until something even more shocking happens.

After Captain America loses Thor hammers during the fight, he proceeds to deflect Thanos’s attacks using his shield. After a few hits, Thanos cracked the shield and with the final blow manages to damage the shield beyond anything we have seen thus far, breaking it in half.

He managed to break the shield in half proving that whatever his sword is made of is far stronger than Vibranium. It makes sense that Thanos’s sword is made from a material not found on Earth, as he has not previously visited the planet.

In the final showdown between Thanos and all of the heroes, we get a brief scene in which Thanos comes face to face with Wanda. Many were looking forward to this duel as at that point Scarlet Witch, alongside Captain Marvel, was considered the most powerful character.

During their fight, Wanda manages to break his sword and Thanos is only able to escape her by ordering his army to attack everyone on earth.

Many believe that if Wanda was able to continue this fight that she would defeat Thanos. This comes as no surprise to people who are familiar with Wanda’s Powers.

We were first introduced to her powers during The Age of Ultron. In the Marvel Cinematic Universe, she got her powers when she and her twin brother joined a HYDRA experiment which woke up their latent supernatural powers.

During the same movie, we get a better understanding of the way her powers work. Her powers are mentally based and include the likes of telekinesis, hypnosis, and energy projection.

Once her brother is killed in the final battle and Wanda senses it, her powers seem to amplify which means her powers are likely connected to her emotions or overall mental state. Her power grows as she harnesses the power of her emotions.

This power is best exhibited during their face of in Infinity War. She displays enormous amounts of power while fighting off Thanos.

She manages to destroy The Soul Stone all while fighting off Thanos. This feat later proved to be a bit too hard for Thanos as he got injured in the process of destroying the Stones in Endgame.

Many point out that her powers are likely going to grow even more as she is likely set up to be the main villain in the Doctor Strange sequel.