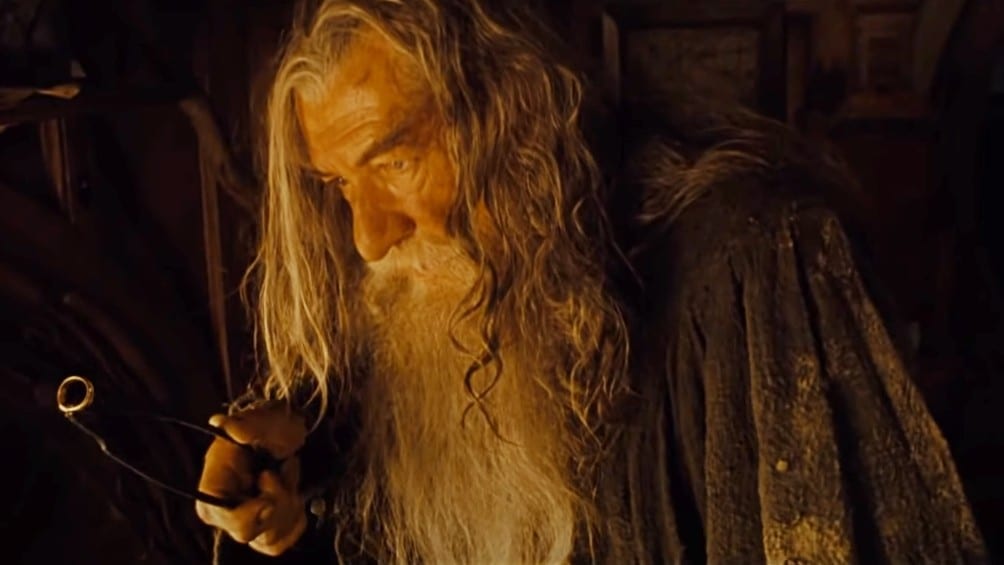 One of the most popular topics among fans is why can’t Gandalf touch the Ring. If you are wondering the same, this article is for you.

Gandalf actually can touch the ring, and he has done it multiple times, he just doesn’t want to hold it for long because he doesn’t want to fall under its spell and get corrupted.

Even after a decade of its first released movie, and many more years before with books, The Lord of the Rings remains a cult favorite. Both kids and adults enjoy these books and movies as they unfold a story of power, love, temptation, and war. After so many years, we still see many fan theories that appear on the internet from time to time, and today we will address this one – Why Can’t Gandalf Touch The One Ring?

Does Gandalf touch the ring?

Gandalf never displayed any strong motive to keep the ring for himself. However, that doesn’t mean he never touched the ring. For instance, we saw him touch the ring as he was throwing it into the fire in Bag End, at Frodo’s humble abode.

However, we never saw Gandalf hold the ring for too long. He was determined not to touch it under any circumstance.

When confronted with why he didn’t want the ring, Gandalf made two important points. His first concern was, if he takes the ring, the ring would offer him enormous and terrible power. Similarly, on him, the ring would grow more deadly, and fierce.

He also expresses his fear that if he gets the ring, he might end up becoming the Dark Lord himself. When asked, he refused to help store the ring. He denied that proposal to keep the Ring safe, and unused. That is because he knew the temptation to wield the Ring was too great to win over, even for the greatest wizard from Middle Earth.

Why can’t Gandalf touch the ring?

In theory, he can. But he chooses not to.

The ring has a strong and evil influence over any mortal. At plain sight, it looks like nothing more than a golden ring. On its pure gold exterior, you won’t find any marks or wear. But under its unbesmirched appearance, it hides a strong and evil power that thrives by influencing others to take it up and put it in their hands.

It corrupts the most well-intended individuals. Once it finds a host, it takes over and makes that person do horrible, things. Power corrupts the morale.

In the beginning, when the Ring didn’t have much influence on his thoughts, Frodo tried to offer the ring to both Gandalf, and Galadriel. However, they both refused. So Frodo was stuck with having to carry the ring around, allowing the ring slowly encroach on his mind.

From the very beginning, when Frodo received a fiery letter at his home in Bag End, he was informed about how manipulative the Ring is. He was fully aware that the ring must not be worn, yet at some point, he developed a strong desire to do it anyways.

Why didn’t Gandalf recognize the ring?

In the movie, The Hobbit: An Unexpected Journey, we saw Gandalf notice Bilbo was wearing an unusual ring. He later realized that it was the One Ring. Gandalf was closely inspecting the Ring on Bilbo’s hand. He has been trying to learn its purpose for the last 14 years. At Bilbos’ birthday party Gandalf saw the Ring after a long time.

The ring works by exploiting the weakness of a person. For instance, we got to see how Boromir, a proud man, expresses his country’s shortcomings in the Council of Elrond. This exact feeling of helplessness, and the desire to grow self-sustaining, makes Boromir want to wield the ring later.

And we did see him attempt to snatch he ring away from Frodo. He succumbs to the temptation, and we see his face immediately turn evil.

Similarly, we also saw Sam give in to the temptation of the Ring. At first, his motive was to not let the ring get in the hands of the Orcs at Cirith Ungol. But slowly, he gets overwhelmed with the thought of gaining unimaginable power, and become undefeatable.

He visualizes another version of himself – Samwise the Strong, Hero of the Age. To rationalize his motives, he convinces himself that he only wants to wield the ring so that he can defeat the Dark Lord himself.

What if Gandalf took the ring?

If Gandalf did wield the Ring, the fate for the people living in Middle Earth would have been completely different. We would see Sauron go into the hideout, as he could never defeat Gandalf as long as he had the Ring, but it would also after some time corrupt Gandalf, and then there wouldn’ be anyone to oppose him. However, that didn’t happen, as Gandalf never wielded the Ring.

In the fight against Sauron, Gandalf could have easily quenched the victory by putting on the ring. Galadriel also admits that the ring would make winning the war much easier. In her own words, “For many long years I have pondered what I might do, should the Great Ring come into my hands.” But that would also mean that they would just take the place of Saruman, and continue the ‘devil’s’ work.

However, it was easy for Gandalf, and Galadriel to curb the temptation of welding the ring, as they were mighty characters, known for their wisdom. But for any less mighty character, it would have been hard.

The Ring came the closest to manipulate Frodo at the very end of his journey. He was starved and beaten. He lost his strength, so he abandoned all his weapons so that he has to carry less weight. And at one point, when Frodo was completely worn out, Sam had to carry him on his shoulder. It is at this moment, that the Ring was finally able to corrupt his will.

You might be wondering, why didn’t Gandalf take the Ring on the back of an Eagle? Well, if he did, that would have been a lot easier and faster. Frodo wouldn’ have to walk to the Mount Doom.

However, Gandalf couldn’t take an Eagle because he didn’t control them. The Eagles were controlled by Radagasts’. We have a whole article related to why they haven’t used eagles to fly the One Ring to Mount Doom.

Gandalf could touch the Ring and take it to Mount Doom. But instead, he let the Hobbits do it. This was part of a bigger plan Gandalf had. Sauron, the biggest rival to Gandalf, was at once the most powerful wizard. He had tabs on everyone in the Middle Earth. However, he deemed the Hobbits as worthless. He didn’t consider them a real threat. And this is why Gandalf planned to make Frodo take on the task of delivering the Ring to the Mountain.