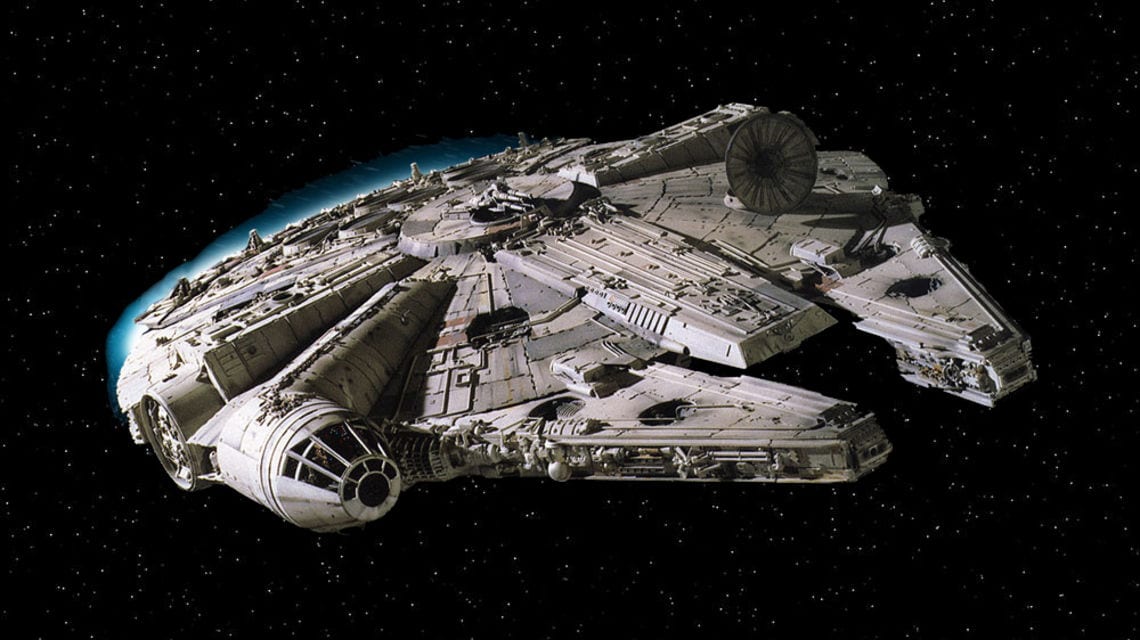 The Millennium Falcon is probably the best known spaceship in the whole Star Wars franchise. Piloted by Han Solo and Chewbacca, the ship has been essential in the Rebels’ victory against the Empire. But, despite all the feats, everyone who lays their eyes on the ship for the first time thinks it’s a piece of junk. Why is that? We are going to answer that question for you in today’s article.

The Millennium Falcon – A History

The Millennium Falcon is actually a heavily modified YT-1300F Corellian light freighter. Engineered and manufactured by the Corellian Engineering Coroporation, the Falcon was – in its original design and purpose – a very large cargo hauler (the term “forklift” is also used quite often), designed to tug large container ships around the universe. It was a very popular and advanced model, although the position of the cockpit (the right side) made it impossible for pilots to pilot it correctly.

“Think of a flying saucer“

The Falcon first appeared in 1977’s Star Wars movie and was designed by Joe Johnston. When talking about the design with George Lucas, Johnston was given the advice to follow the design of a basic flying saucer, without any further information. There is also an ongoing, but never confirmed rumour that the Falcon was actually designed to resemble a hamburger with a pickle on the side, but – as we’ve stated – this was never confirmed to be true. The ship has appeared in all three movies of the Original Trilogy, as well as the complete Sequel Trilogy. Its “origins” are explored in the movie Solo: A Star Wars Story.

As for the Falcon’s role in the story, chronologically – it all started with the movie Solo: A Star Wars Story. The ship was owned by gambler and con artist Lando Calrissian, who had won it via gambling. The ship was heavily modified during that time and later on, in fact – it was modified so much that it lost its original purpose. At the end of the movie, Lando had to give up the ownership of the Falcon to Han Solo as payment for losing a gamble.

Han Solo and Chewbacca used the ship for their smuggling business, working mostly for Jabba the Hutt. In Star Wars (1977), Ben Kenobi approaches Han Solo with a job offer – to transfer him, Luke Skywalker and two droids to Alderaan. Han Solo accepts, boasting that he has outrun Imperial ships before. This movie revealed – for the first time – that the Falcon “made the Kessel Run in less than twelve parsecs”, which was thought to be impossible. Disregarding the debate about what parsecs are, the fact was actually confirmed in Solo, where it was shown how the famous Run was made in twelve seconds (although Chewbacca suggested it was closer to 13 seconds, Han insisted; nevertheless, even 13 seconds would have been an amazing feat).

“Fast ship? You’ve never heard of the Millennium Falcon? It’s the ship that made the Kessel Run in less than twelve parsecs. I’ve outrun Imperial starships. Not the local bulk cruisers mind you, I’m talking about the big Corellian ships now… She’ll make point five past lightspeed. She may not look like much, but she’s got it where it counts, kid. I’ve made a lot of special modifications myself.”

Despite its unimpressive appearance, the Falcon was heavily used by the Resistance and has been pivotal in the defeat of the Empire. Lando briefly reclaimed his ship after his notorious “betrayal” in The Empire Strikes Back, but it was soon returned to Han Solo and Chewbacca.

The duo lost the ship sometime after Return of the Jedi and it reappeared on Jakku in the possession of a junk dealer named Unkar Plutt. Rey and Fin stole the ship to escape, only to be captured by a smuggling freighter actually piloted by Han and Chewbacca. Han thus reclaimed his ship and again used it to help the Resistance fight the First Order, albeit reluctantly at first. After Han’s death, Chewbacca became the owner of the Falcon.

This was a brief history of the most famous spaceship in the Star Wars franchise. We shall now see why it’s considered a piece of junk by practically everyone who has seen it for the first time.

Is it a piece of junk?

First of all, it is a really old ship, built around 60 BBY. Second of all, it was designed to be a cargo hauler and you’re certainly not going to go for a user-friendly design with a ship manufactured to tug around large containers and other junk. Thirdly, the Falcon as we see it in the canon movies is not even the original model, but a rebuilt, refurbished model that was altered a lot, both by Lando and Han. It also has a lot of stains, holes and other evidence of its adventures with Han and Chewbacca; Han even refuses to wash it and clean it out of pride.

“You came in that thing? You’re braver than I thought.”

On several instances, the Falcon was also very faulty. It had problems with its Hyperdrive and it required constant maintenance whenever it was not flying (just remember the scene in the Resistance base on Hoth, when Chewbacca was fixing it and thing started to go haywire and explode), which also explains why people think it’s a piece of junk. And it is, in a way – it’s an old, crappy model – but the Millennium Falcon has proven its worth on multiple occasions.

It is a fact that, despite its appearance and all the problems, the Falcon is a really fast and practical ship. Solo, being a good pilot, has managed to get the best out of the Falcon, using it to help the Resistance on several important occasions. This is why, despite everything, we cannot state that the Millennium Falcon truly is a piece of junk, but we cannot deny that it does look like one and we’ve explained to you why that is.