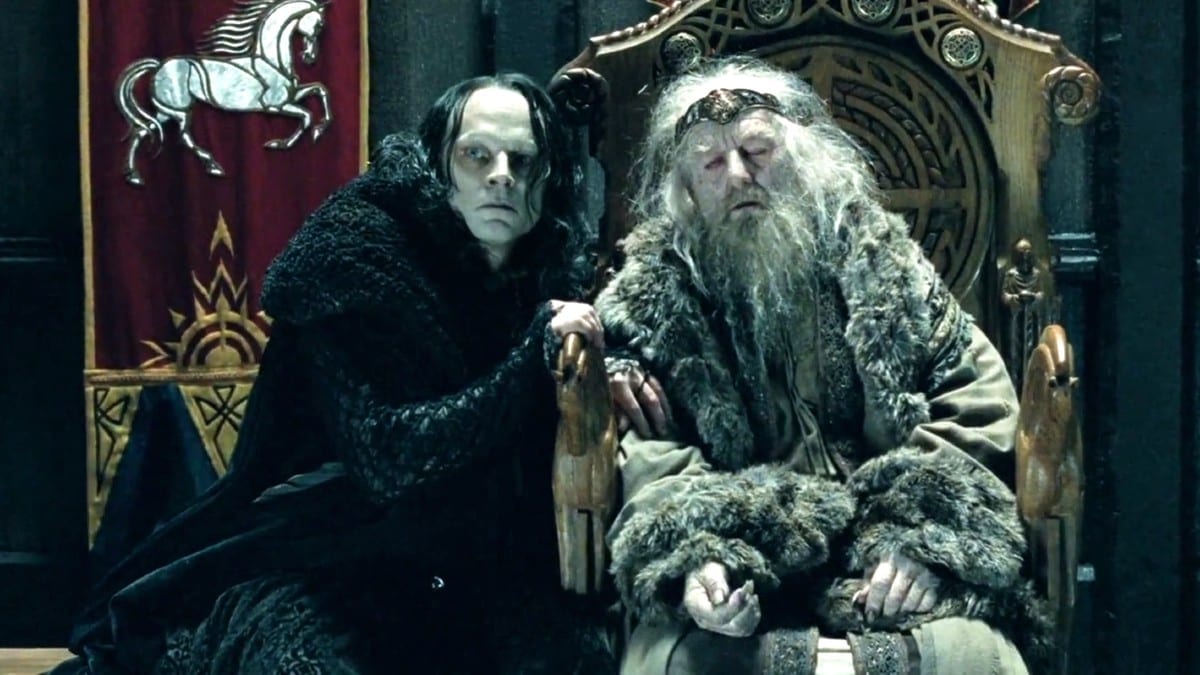 In the second film installment of Lord of the Rings, The Two Towers, when we first visited the kingdom of Rohan, something quite unusual happened. When Aragorn, Gimli, and Legolas entered the king’s castle along with Gandalf, they were asked to submit their weapons before they could appear before the king. Then the sickly king, who could not even recognize his son, said something that we only heard only once in the whole series. He said, “Why should I welcome you, Gandalf Stormcrow.” Let’s see why Théoden called Gandalf “Stormcrow.”

It can be said that Gandalf was the storm of death that was coming for Théoden. In the whole film and book series, only Théoden, the king of Rohan, has ever called him Gandalf Stormcrow. He was only referred by that name once in the films and three times in books.

Let us get to the bottom of why does Théoden call Gandalf Stormcrow, what does it mean, and why Gandalf has no memories of Moria.

Why do they call Gandalf Stormcrow?

Some fans think that Stormcrow is a name associated with Gandalf, and many people call him that. But in the whole film and book series, only Théoden, the king of Rohan, has ever called him Gandalf Stormcrow. It is not a name that Gandalf is usually known by. He was only referred by that name once in the films and three times in books.

But that does not mean it has some deep and significant meaning. Since Théoden was not truly himself when Gandalf visited him, Saruman controlled him, even talking through him, using the king as a medium for himself. So, these words probably come from Saruman himself. He had always looked down on Gandalf as an inferior wizard. He did not like his way of living and how Gandalf was meddling with everything and getting in trouble as a result. Trouble would always follow Gandalf.

Crows are considered a bad omen in many cultures, especially in Celtic culture, which the kingdom of Rohan is inspired by. It can be said that Gandalf was the storm of death that was coming for Théoden.

What does Gandalf Stormcrow mean?

Tolkien has prominently used crows in his stories; he mostly portrayed them as a symbol of insult and trouble, as a foul creature representing evil and serving the darkness. Crows are also very notorious in folklores and myths. When Théoden calls him that, he is bringing a storm of troubles along with him in Rohan. In this sense, it implies that Gandalf is the bringer of storm and danger and is also a scavenger who benefits from the chaos of war.

Gandalf has never settled in one place; instead, he traveled far to fulfill his purpose to defeat Saruman’s dark forces. He probably had visited Rohan before, whenever they faced conflict or desolation. The Rohirrim stopped trusting elves and wizards. They probably called him Stormcrow for a long time because of him showing up with trouble.

Why does Théoden say, “Why should I welcome you Gandalf Stormcrow”

When Gandalf reunites with his companions from the fellowship of the ring in Fangorn forest, he takes Aragorn, Gimli, and Legolas to Rohan to warn them about the threat of Isengard and the hybrid orcs army that Saruman built, they could walk in sunlight, and they were bred for one purpose only, killing.

In Rohan, the king was under Saruman’s spell, having his mind poisoned by Grima, who played the king as his puppet. A few days ago, the king’s son was severely injured by orcs, and he later passed away in the castle. Grima had exiled around two thousand riders of Rohan, weakening the position of Rohan furthermore. Unaware of his impending doom, the king slipping more and more into the grasp of Saruman.

That is when Gandalf arrived at his castle. Since Saruman was the puppet master behind it all, Gandalf was not going to be welcomed there. When the king said, “Why should I welcome you Gandalf Stormcrow” in the film, they did not use the full passage.

In the books, Théoden says, “You have ever been a herald of woe. Troubles follow you like crows, and ever the oftener the worse … Here you come again! And with you come evils worse than before, as might be expected. Why should I welcome you, Gandalf Stormcrow? Tell me that.” And if we take a careful look, Gandalf was bringing terrible news precisely as the king had told him. That is the reason he did not want him there.

Why does Théoden say, “You have no power here Gandalf Stormcrow.”

Saruman had Théoden under his spell, and when Gandalf tried to free him from the spell, he and Théoden virtually had a magic duel. As Saruman knew that he was stronger than Gandalf, he uttered the words, “You have no power here Gandalf the Grey.” One thing to note here is Théoden never said, “you have no power her Gandalf Stormcrow.”

When Gandalf fought with balrog on the bridge of Khazad-dûm to the peak of Zirakzigil for two days straight until the balrog was dead, it also took his own life, but his soul did not depart the middle earth because his work had not been done there. He came back as a white wizard, as Saruman should have been. His powers grew, and Saruman did not know about that. That is why he assumed that Gandalf had no power in front of him.

Why does Gandalf have no memory of Moria?

When the fellowship of the ring enters the mine of Moria through a secret door, they climb a narrow stairway and come across three hallways. Gandalf proceeds to say, “I have no memory of this place,” which is unusual because Gandalf remembers everything. There are some explanations:

Gandalf had been to Moria, but he only traveled from east to west and not the other way around. So, he did not notice that two other hallways are ending on the same road.

Or he could have forgotten, Gandalf had roamed the middle earth for thousands of years, and his memory can get cloudy, and the last time he visited the mines of Moria was a very long time ago, Considering he was still in his grey form where most of his prowess was locked.