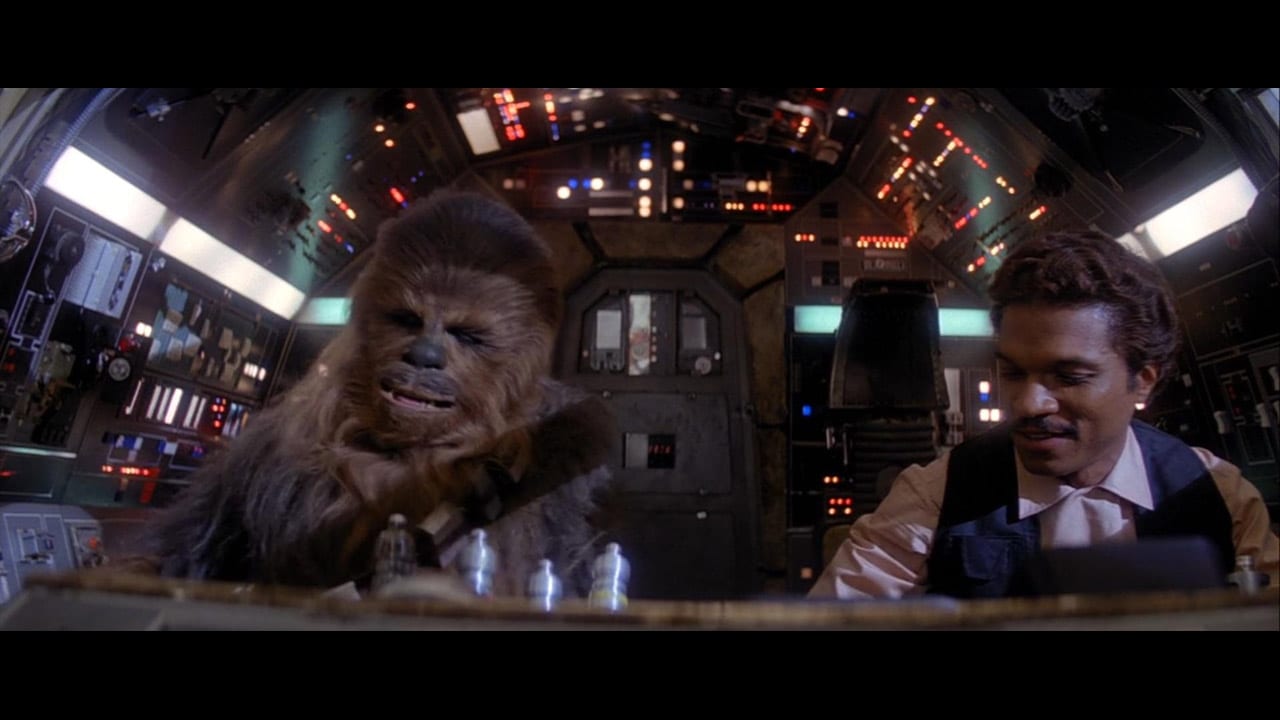 The Star Wars universe is, needless to say, home to a vast gallery of unique and memorable (and dangerous) characters who either aid or hinder our heroes’ quests for ultimate victory. An underrated fan-favorite catches the eye for his history of doing both…as well as for his fashion sense. Was Lando Calrissian simply trying to beat everyone to the Han Solo cosplay punch? Is there even Halloween in space?

According to a 2011 New Orleans Comic-con panel, including Lando actor Billy Dee Williams himself, the decision to have Lando don Han’s clothes was made by head costume designer John Mollo. No official reasoning has ever been given by members of the production team or cast.

From mild, sensible reasonings to wild and hardly feasible conspiratorial hypotheticals, the internet is awash with attempts to solve one of the modern film’s little hidden mysteries. This article explores the franchise’s favorite smuggler…turned freedom, fighter…turned businessman…turned GENERAL, for answers.

Baron Landonis Balthazar Calrissian III is a character in the Star Wars universe. A smuggler, a trickster, a friend? Little is known about his formative years; we only know that he drew his first breath on the planet of Socorro about 43 years before the Battle of Yavin, and quickly developed a hand for the card game sabacc. He first appears in the 1980’s film The Empire Strikes Back (ESB), where he performs the role of Baron Administrator of the gas mining colony Cloud City on the planet Bespin in the Anoat sector of the Outer Rim Territories. With sharp wits and an even sharper mustache, Lando was full-on 80’s and full of surprises.

Han, Leia, and Chewbacca, after narrowly escaping Darth Vader’s clutches on the ice planet Hoth, head to Cloud City to regroup. It is quickly established that Han and Lando are old acquaintances from way before the events of the film.

There’s tension in the air though, perfectly encapsulated by the stern expression on Lando’s face as the Millennium Falcon touches down on Cloud City. One of many acting highlights by the sterling Billy Dee, who would later earn Saturn award nominations for his performances in both The Empire Strikes Back and The Return of the Jedi.

Billy Dee was later replaced by Donald Glover for 2018’s stand-alone film Solo: A Star Wars Story, which serves as an origin story for Han and Lando’s relationship. In Solo, a young Han is introduced to the sly young Lando by Qi’ra, a childhood friend of Solo’s from his home planet of Corellia. Han and Qi’ra are in need od Lando’s ship, the Millennium Falcon, for a massive heist. Drama ensues as the events leading up to and surrounding the Falcon’s transfer of ownership slowly unfold.

Are Lando and Han Solo friends?

Back in ESB, Lando bears insight into the root of his apparent chagrin as he immediately attacks Solo with accusations of being a “slimy, double-crossing, no-good swindler” before moving in to embrace the cocky Han, revealing an old and unique friendship. Their primary bone of contention is the ownership of the Millennium Falcon, which was once Lando’s most prized possession until he lost it to Solo in a game of sabacc. It is a friendly rivalry though, and Lando is generous enough to offer to repair it for Han, who points out the amount of growth and maturity Lando has gone through over the years. The term “scoundrel” is one that came to define Lando in his earlier years of gambling, conning, and breaking women’s hearts. No wonder he and Solo formed such a bond.

However, all the comradery unravels as soon as Lando leads Han, Leia, and Chewbacca into a private dining room where Darth Vader himself is waiting with a trap.

In Return of the Jedi (ROTJ) Lando makes amends for his betrayal in ESB by sneaking his way into the palace of the notorious Jabba the Hutt in order to rescue Han from his frozen torture. Han returns the favor, saving Lando from a sarlaac attack, and serving as the margin between life and death for the cheeky smuggler. Later on, Lando’s bravery is acknowledged as he is made the General of the Rebel Alliance in anticipation of a major assault on the second Death Star. Their friendship is underlined further when Lando promises to return the Millennium Falcon to Solo after the battle, which he does after firing the killer shot at a defenseless Death Star.

Given everything they have been through, it is clear that Han and Lando have a brotherhood based on a rivalry that is based on a friendship founded on true mutual respect. Two rebel spirits in a universe that increasingly demands conformity.

Why is Lando wearing Han’s clothes?

The main course of the article. This question has been a fun little head-scratcher for quite a while now. As Lando and Chewbacca set off in the Millennium Falcon to rescue Han from the bounty hunter Boba Fett at the end of ESB, a distinct change of wardrobe is noticeable from the former, who is clearly wearing Han Solo’s iconic white shirt and black vest combo in the ship’s cockpit. Younger Star Wars fans were probably alerted to this occurrence when comedian Seth MacFarlane made a skit of the scene through his show Family Guy back in 2010.

Various reasons have been suggested and, as mentioned above, they vary in feasibility. That said, the most common and most logical fan opinions argue that Lando simply did not have the time to pack a fresh suitcase in time as they went after Fett in hot pursuit. Remember Lando had just double-crossed Vader, the same person with whom he had already planned Solo’s double-cross. There was going to be hell to pay, which would definitely bump efficient packing off the priorities list for him. As for Han, someone whose full-time residence was the Falcon, he ought to have had more sets of clothes on board. As an 80’s action star, Solo is almost obliged by society to have hundreds of the same outfit in a wardrobe somewhere.

Another reason for Lando wearing Solo’s clothes is that he was, at the time, allegedly being primed to eventually take over from Han Solo in case actor Harrison Ford refused to reprise the role, which almost happened according to some media outlets.

Other fans’ opinions on the topic state that Lando “missed” Han and simply wanted to feel close to him, which could be the case. In 2014 Billy Dee Williams himself claimed, jokingly, that Lando and Han were “an item” in response to this question. However, several hours of maverick alpha male bantering and battling strongly suggest against this possibility. It is possible, but highly unlikely.

The real-life reason, according to grainy footage of Billy Dee sat on a Star Wars panel at a New Orleans Comic-Con in 2011, was a simple costume design decision by ESB head designer John Mollo. At the same event, the panelists revealed that in the lore, Han’s “outfits” were actually uniforms of the long-defunct Corellian Corps Group that had wound up in his possession. Perhaps Solo’s donning of the uniforms was a symbolic resurrection of the corps in his fight against the ever-tightening grip of the Empire. Perhaps the formerly selfish Lando was simply carrying on that sentiment as he prepared to risk his own life, and his favorite ship, on a mission to save his friend.

What is Lando Calrissian Wearing on his Wrist?

Lando often wore a multipurpose wrist link on his wrist. He often used his wrist link for communication purposes in and around the mining operation.

Why Did Lando Betray Han Solo?

He did so to save his mining operation and everyone within its sphere of influence. Prior to the events in ESB Lando had been operating quietly under the Empire’s nose. This low-key approach to operations was already stifling Cloud City’s profitability because of supply and understaffing issues. As Baron Administrator, he could ill afford to tempt Darth Vader’s wrath because his people would probably suffer the most and for generations. As much as Lando respected, or even loved, Han there was no way he could turn over his whole colony to be destroyed for one man. Vader managed to get to Cloud City before Han, Leia, and Chewbacca did, which was a huge advantage for lulling them into a false sense of security before springing the trap.

Lando’s loyalty ultimately shines through though, as he immediately regrets the treachery and the fate that befalls his friend.

There is so much more that can be gathered about Lando from the main film series to the comics, videogames, and other canons. Various exploits of odd-defying gambles, daring smuggle runs and vicious battles are just the tip of the iceberg when exploring one of the more complex characters in George Lucas’ epic universe.

The Force be with you.

You can find an amazing Han Solo costume at Amazon.com