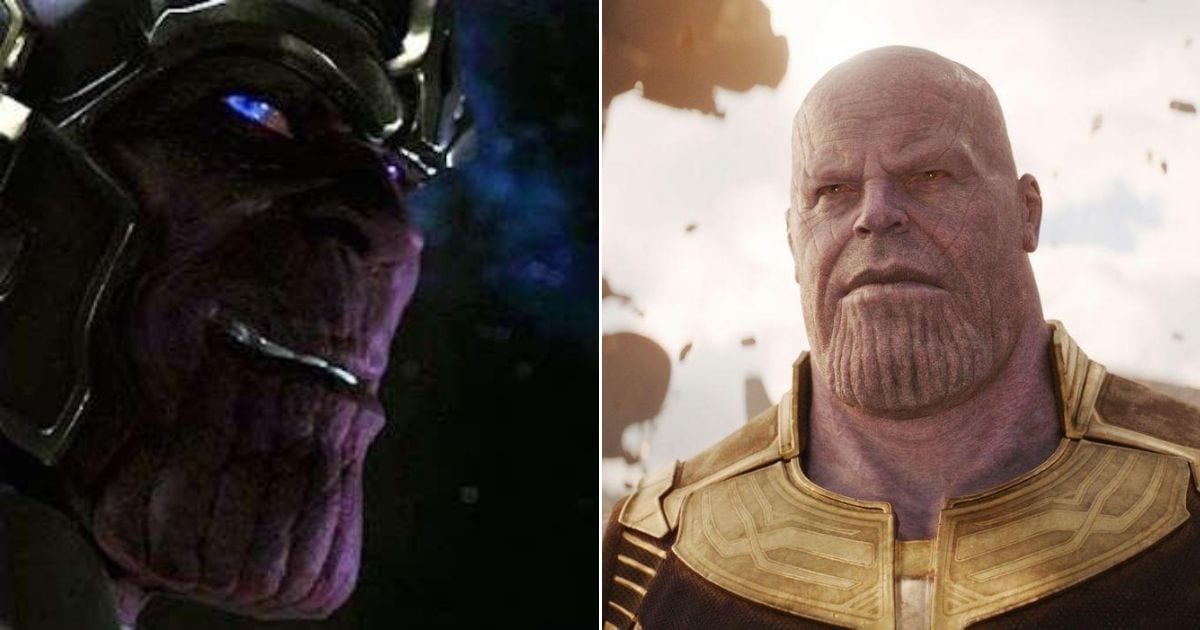 These days, there probably isn’t a person in the world who doesn’t know who Thanos is. However, not so much is known about his color, and many are wondering, ‘Why is Thanos purple in MCU?’ So let us answer that question for you, and we will also tell you more about why he is different from the rest of his people and why, seemingly, he changes color and appearance in movies.

Legends have it that Thanos gets a purple color due to a genetic disorder that afflicted him since the time of his birth.

Continue reading our article to find out more about his color, and way he was considered an outcast on his home planet Titan.

The leader of the Chitauri Army, Thanos, seeks to restore balance to the world by wiping out half of the population to ease pressure on limited resources.

To achieve this, he aims to unite the six Infinity Stones and gain god-like powers. His maniac pursuit brings him into conflict with the Avengers and lays waste to the entire universe.

Why is Thanos Purple?

In the MCU, Thanos has been made a standout among all characters with his purple skin tone.

Some legends have it that Thanos gets a purple hue due to a genetic disorder that afflicted him since the time of his birth.

Even thou that is not explicitly explained in the movies, we have an answer for you from the comics.

Eons ago, the Celestials (some of the oldest entities in the Marvel Comics universe) used to travel the entire reaches of the universe.

They would search for planets and experiment with the species indigenous to said planet. This would result in primarily 3 different evolutionary offshoots:

They are perfect genetic specimens who were essentially immortal and had amazing abilities.

The exact opposite of the Eternals with grotesque features, devious orientation, and short spans of life.

Why does Thanos look different from other Titans?

Back on Titan, the Celestials carried out similar experiments. Thanos’s family were Eternals as well. However, occasionally the gene pool would produce exceptions where Eternals would gain features from their cousins – the Deviants.

Thanos’s mother was horrified to see her son gaining the appearance of a Deviant in spite of his family being Eternals.

He faced horrific bullying growing up, which grew even more intense as people would bear witness to the glaring contrast between him and his brother Eros (Starfox). But, what Thanos lacked in looks, he made up for with his mind, being a brilliant engineer, scientist, and much, much more.

But to get back to our question, ‘Why is Thanos purple?’, it is because of a genetic disorder that afflicted him since the time of his birth, that bore the Deviant strain in his otherwise Eternal body.

Why does Thanos look different in each movie?

There has been a dramatic transformation in Thanos’ appearance in the Marvel Cinematic Universe over time. The Mad Titan has looked different in each film. Marvel first teased Thanos in 2012 and introduced him as a character who would come to be known as the nemesis to Avengers in the years to come. After several smaller sneak-peaks, it was the Avengers: Infinity War, where we finally get to see Thanos in all his might.

We first get to see Thanos at the end of The Avengers. In a mid-credit scene, when The Other is seen speaking about the strength of the Avengers, Thanos smiles in a sinister manner. Thanos looks remarkably different in each movie because the filmmakers focused on using prosthetics and makeup instead of CGI to design Thanos.

While Damion Poitier first played the Mad Titan in The Avengers, he was later replaced by Josh Brolin. This is a key reason why Thanos’ facial structure is different in future roles. When it was to Poitier, Thanos had very distinct cheekbones and chin and a pinkish skin tone.

The second time we get to see Thanos is in the Guardians of the Galaxy. It was here that the MCU introduced us to Josh Brolin as the Mad Titan. With Brolin, Thanos became a completely CG character. In terms of physical design, the use of Brolin as a basis for Thanos’ design led to a change in the facial structure. His nose, cheeks, lips, and chin are different in Guardians of the Galaxy. However, the most radical change is in his skin tone. Instead of the pinkish look from The Avengers, Thanos was now a violet shade of purple.

But to make it clear, Thanos isn’t changing his skin color, it is the shade that changes depending upon the light where he is located.

We next see Thanos in Avengers: Age of Ultron, where the Mad Titan walks into an unknown location and picks up his Infinity Gauntlet, stating that he will get the Infinity Stones himself. In this brief appearance, Thanos looks just as he was seen in Guardians of the Galaxy. The only change to his looks is the addition of the Infinity Gauntlet.

Thanos takes a brand-new form in Avengers: Infinity War. It has been reported that Brolin did some motion and performance capture to bring Thanos to life like never before. The CGI technology gave Thanos a soul-stirring and monstrous life form. The new design brought even more of Brolin’s features into the character but also maintained the Titan’s general design.

We also saw several additions to Thanos’ facial design in the form of scars on his cheeks. While previous depictions of Thanos had four scars on each side running from his upper lip to the top of his cheeks, we only saw three scars on him later. However, the marks on his chin increased from nine to eleven.

We get to see the starkest differences in Thanos’ appearance during Avengers: Endgame, where two different versions of him appear in the storyline.

As the film begins, Thanos already is in possession of some Infinity Stones. The stones have inflicted permanent damage on one side of his body. His arm and face are severely scarred. However, the actual details of Thanos’ physical design are more or less the same as in Avengers: Infinity War.

What shade of purple is Thanos?

Unfortunately, we can’t say exactly. The changing skin tone of Thanos is mainly due to makeup, lighting, and CGI in the movies. Different shades of purple and blue and sometimes even pink are seen being used.

We have extracted what we could from images, so here is the color scheme for every movie