One Of Us Is Lying has been quite a success for Netflix as the series is now available for streaming in international locations on the streaming giant’s platform. Plenty of people have binged through it through the entire weekend, and that leaves people wondering if the series is going to see a continuation, considering that it ended in a cliffhanger that opened up the possibility of future seasons. So, is One Of Us Is Lying going to get a second season, and when will season 2 arrive?

A month before it was released on Netflix, One Of Us Is Lying was already renewed for a second season by Peacock, whose executives saw the show’s potential early on. That means that there is a good chance that we will be seeing it on Netflix sometime next year after it gets released on Peacock in the US.

The good news is that we are going to see the continuation of the Bayview Four’s story, considering that there was a massive cliffhanger left at the end of season 1. It was also a great decision on the part of Peacock to renew it. As such, if Netflix decides to pick up its international streaming rights, we may see season 2 right around early 2023.

One Of Us Is Lying Season 2 Release Date

One Of Us Is Lying is one of the interesting teenage drama thrillers that are available for streaming today, as it was just recently released globally (except the US) through Netflix. A lot of people watched the eight-episode series over the weekend, and that meant that they were left wondering what happens to the Bayview Four next, especially with a cliffhanger at the end of the season.

Considering that there was a huge cliffhanger that made fans wonder what’s going to happen to the main cast, fans are wondering if there is going to be a second season of One Of Us Is Lying.

The good news is that it was renewed for a second season early in January. Peacock broke the news during the second week of January 2022, as the series became available on Peacock several months before it was released on Netflix in global areas other than the US.

In a Variety article, it was announced that Erica Saleh, who adapted the book version of the series into a live-action show, is going to return as the showrunner of season 2. Meanwhile, the executives over at Peacock were equally happy about renewing One Of Us Is Lying for a second season, given the fact that they saw its potential early on.

“From the moment we saw the pilot Erica wrote, we knew this was a special show, and we’re thrilled that Peacock felt the same,” said Beatrice Springborn, president of UCP. “Returning to shoot in New Zealand with Erica as showrunner for season two is an exciting next chapter in the wild and fun story of the Bayview Four.”

“We are so happy with the reception of Season 1 and are beyond thrilled that we get to continue our story in Season 2,” said Saleh, the showrunner for season 2. “We can’t wait to bring more mystery to the halls of Bayview High!”

Considering that it has only been over a month since the announcement that it was going to be renewed for a second season, we can presume that the showrunner and the writers are still working on the script and the plot as of this writing. That means that shooting for the series might happen sometime in the next few months.

One Of Us Is Lying was released in the US through Peacock on October 7, 2021. It is safe to assume that the filming began about half a year before its release. That means that if the filming of the second season 2 were to start sometime in March or April of 2022, there could be a possibility that the second season will also premiere right around the same time as the first season.

RELATED: Fiction Horizon Presents The Most Anticipated Movies and TV Shows of 2022

As such, if you live in the US, there is going to be a chance that you will be able to catch One Of Us Is Lying season 2 sometime late in 2022 or early in 2023. Meanwhile, global locations may have to wait a few months after the release of One Of Us Is Lying on Peacock in the US before it becomes available unless Netflix is able to find a way to negotiate a simultaneous release with Peacock in international locations.

One Of Us Is Lying Season 2 Trailer

Right now, since the filming of the second season is yet to begin, the trailer for season 2 is not yet available. We will keep you posted in case the trailer becomes available in the next few months or so.

One Of Us Is Lying Season 2 Plot

The ending of One Of Us Is Lying season 1 gives us a good clue to what will happen in the next season, as there are still unresolved issues that the Bayview Four students need to take care of before they can go on with the rest of their lives.

During the events of season 1, the Bayview Four discovered that it was Simon’s best friend, Janae, who was posting some of the secrets regarding each of the four members of the so-called Murder Club. However, Janae also told them that she got logged out of the About That app and that the passwords were promptly changed. She could no longer access Simon’s app.

As the series progressed, the Bayview Four discovered that Simon was in contact with Addy’s boyfriend, Jake, throughout the summer and just a few days before Simon’s death. The circumstances behind Simon drinking water with peanut oil became fishy, as it was later discovered that he and Jake were in on it the entire time.

FABC Related PostOne Of Us Is Lying Season 1: Ending Explained – Who Killed Simon, &amp; Why?

However, when Jake found out that Addy and the others knew about his role in Simon’s death, Jake chased her out to the forest with a gun in hand, as he threatened to kill both her and Cooper if they wouldn’t give him the Xbox that contained proof of his plans. However, as the rest of the Bayview Four arrived, a gunshot could be heard. Jake was seen lying on the ground dying from a fatal gunshot wound, as we weren’t able to see who shot him.

Right as the series was about to end, each of the four students received a mysterious message that starts with “Simon says.” The message told them that he knew what they did, and the series ends in a cliffhanger.

Considering the events at the end of the series, it appears that the same hacker who logged Janae out of the app was responsible for sending that message. As such, the events of season 2 will most likely revolve around the Bayview Four solving the mystery of who was behind the hacking of the app, as he most likely saw what they did to Jake as well.

While most of the events of season 1 stayed true to the source material, which is the book of the same title written by Karen M. McManus, it is widely believed that the second season will deviate from the book.

One Of Us Is Lying Season 2 Cast

Because season 2 of One Of Us Is Lying will happen right after season 1, that means that the main cast will be returning. We will once again see the Bayview Four composed of:

How Many Seasons Of One Of Us Is Lying Will Be There?

As of now, we cannot say for sure how many seasons One Of Us Is Lying will have because the second season had just been announced. However, if Peacock is going to allow the showrunners to follow the books, there could be at least four seasons. Season 3 could follow One Of Us Is Next.

Meanwhile, it was announced by the author herself that book 3 of the One Of Us trilogy would be available sometime during 2024, and the third book could possibly be the fourth season. Karen M. MacManus also has two other books that are not connected to the One Of Us series but are still just as good. 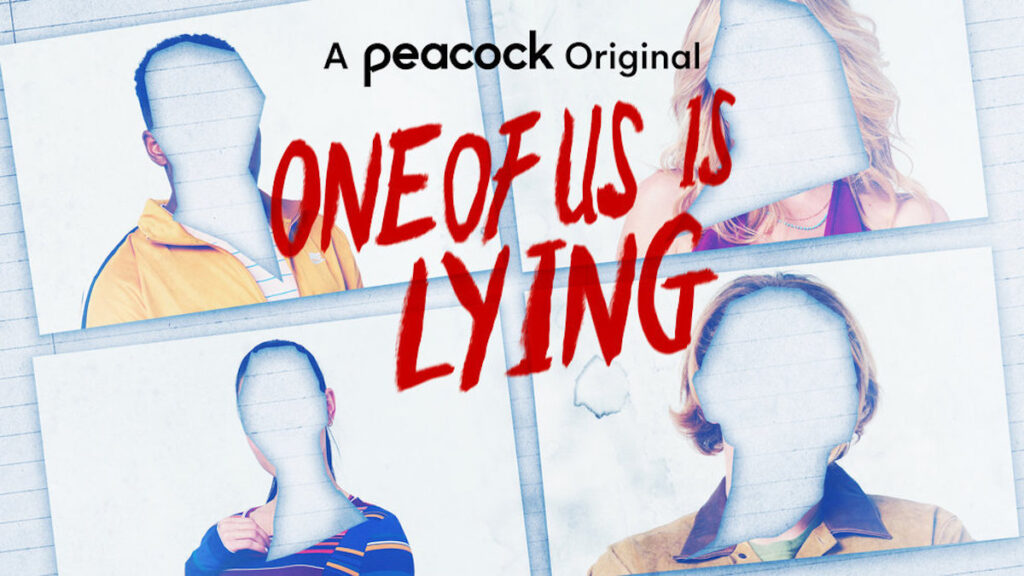