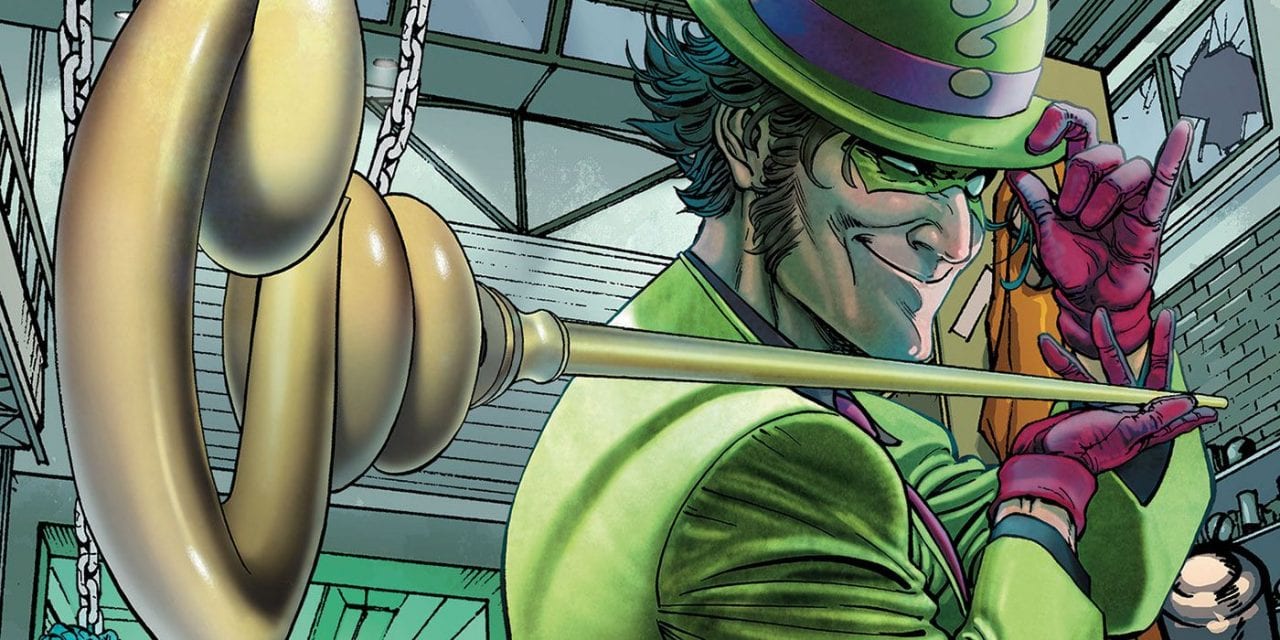 Riddle me this: What’s green, and purple and carries a cane? A riddler, of course! Okay, now that you’ve survived this horrible pun, let us get to more serious matters. In today’s article, we are going to be dealing with one of Batman’s best-known enemies – Edward Nygma, a.k.a. The Riddler. The Riddler is a highly intelligent supervillain whose main gimmick are riddles and overly complex plots which he uses to demonstrate his intellectual superiority in front of others. We are going to be dealing with those riddles today.

Who is the Riddler?

The Riddler (real name Edward Nigma, also known as Edward Nygma or Edward Nashton) is a fictional supervillain appearing in comic books published by DC Comics, primarily as an enemy of Batman. The Riddler is one of Batman’s longest and most dangerous foes, and is best known for his use of riddles and conundrums.

The Riddler debuted in Detective Comics #140 (1948) and was created by Batman co-creator Bill Finger and Dick Sprang. The character is commonly depicted as a criminal mastermind in Gotham City who takes delight in incorporating riddles and puzzles into his schemes, leaving them as clues for the authorities to solve. The Riddler is one of the most enduring enemies of the superhero Batman and belongs to the collective of adversaries that make up his rogues gallery.

As it was the case with a lot of Batman’s enemies, the Riddler has undergone a lot of changes since his early appearance during the Golden Age of Comic Books. He was a gimmick supervillain and was initially dressed in a green latex suit with question marks, also wearing a signature domino mask. He was known for his ridiculously complex traps and plans, but also for using riddles to communicate with the police and Batman. As the years went by, he became less of gimmick villain and more of a obsessed neurotic who wanted to show his superiority to the world. Riddler usually thinks himself intellectually unbeatable, which is why he is often shocked when Batman manages to foil his plans.

Despite focusing on riddles and puzzles as his modus operandi, Riddler won’t hesitate in killing his victims or doing what is necessary for his own profit. Still, he is one of the rare Batman villains that has actually had a crime-free period, during which he worked as a private detective.

Due to his popularity, The Riddler has featured in all types of derivative materials, including video games (especially the Arkham series), TV shows (both animated and live-action) and movies; in the film Batman Forever, he was played by Jim Carrey, and Paul Dano is going to play him in Matt Reeves’ The Batman.

Here is our list of the 10 best riddlers uttered by Batman’s enemy, The Riddler. The riddles have been taken from different sources (comic books, TV shows, movies, video games) and we hope that you’ll have fun solving them.

NOTE: In this section of the article, we are only going to give you the riddles themselves, without the solutions so as to avoid ruining the solving process. The solutions will be presented at the end of the article so you can see how successful you’ve been.

This riddle was uttered in Rebirth’s Batman #30 (2017), in the midst of the infamous “War of Jokes and Riddles”, where the Riddler fought against the Joker. The riddler is more on the punny side.

2. “What occurs once in every minute, twice in a moment, but never in a thousand years?”

A classic riddle that debuted back in 1965, in the comic book Batman #171, where Batman and Robin had to fight the Golden Age iteration of the riddler. Although Robin did not know the answer, Batman said that this was one of Riddler’s easier riddles.

3. “I am… ‘A house without the head of head, knitted deep within the trees. A head that lies without its eyes, stitched silently to tearse.’ What am I?”

This overly complex riddle, which is actually a trademark of Edward Nygma, was first shown Batman #33 (2014), as part of Riddler’s challenge for Batman during the “Zero Year” event. Needless to say that Batman managed to figure this one out, despite it’s redundant complexity.

4. “How can one get into a locked cemetery at night?”

This is another classic riddle, that debuted in 1966, in the comic book Batman #179. The story showed us another classic encounter between the Dynamic Duo and the Golden Age version of the Riddler. Batman, of course, figured out this one as well.

5. “There are three men in a boat with four cigarettes and not matches. How did they manage to smoke their cigarettes?”

This classic riddle brings us back to Batman #171 (1965), and the already mentioned clash between the Dynamic Duo and the Golden Age version of the Riddler. This riddle is actually a pun and seems to not be an original idea of the Riddler.

This is riddle, which appeared in Batman #452 (1990), is an example of Riddler’s more obvious, yet dangerous riddles. Namely, this Riddle was posed to a restrained officer whom the Riddler killed just moments later, his blood covering an edition of Truman Capote’s In Cold Blood.

The 1995 one-shot Batman: Riddler features a story that was connected to the movie Batman Forever. In it, the Riddler asks the reader to riddle him this, but then quickly answers his own riddle, not giving anyone any time at all to try and solve it.

8. “How does an exhibitionist garbage collector break up with his girlfriend?”

This riddle is taken from the same comic book as #7, but with the stakes being bigger, since it was posed to a man whom the Riddler intended to kill with a blade. Adrenaline probably did what it had to do and the man solved the riddle, but the danger was there.

The 1983 Batman #362 brought us yet another classic riddle, where Batman and Robin had to see through the Riddler’s word games in order to solve a pretty traditional riddle, which they ultimately did.

10. “Why do the inmates call this prison– Fiddler’s Inn?”

Being as intelligent as he is, the Riddler does not only pose riddles, he is also able to answer them, just as he did in end of Batman #171 (1965). The riddle was posed by Commissioner Gordon as a joke after Riddler had been caught, with the supervillain reluctantly answering it.