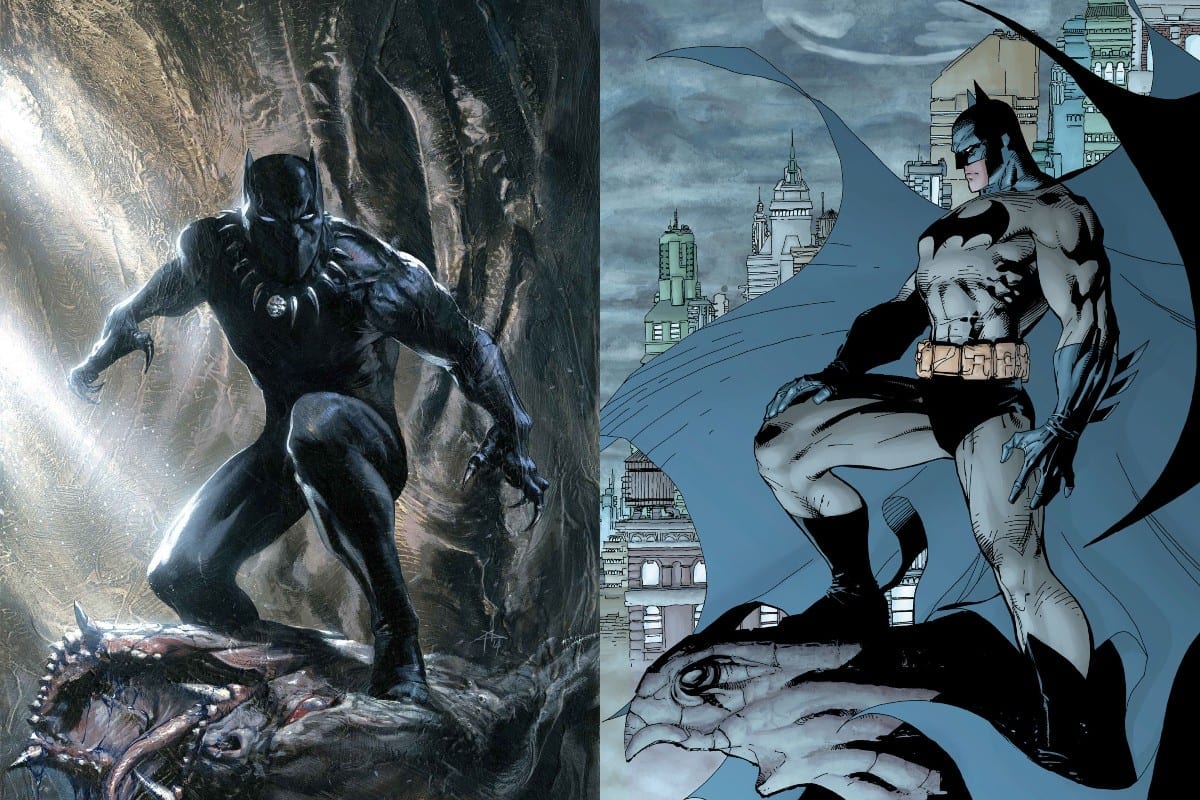 We are going to compare DC Comics’ Batman and Marvel’s Black Panther, two superheroes with a very noir theme connecting them to each other. Now, Batman is one of DC’s best-known superheroes, while Black Panther is a character that has only recently become a pillar for Marvel Comics. This is why we have decided to see who’s stronger – the Bat of Gotham, or the Black Panther of Wakanda?

Without preparation, Batman would certainly lose to Black Panther in a fight, but as soon as the Dark Knight would discover Black Panther’s weakness(es), he would easily defeat him just as he did with stronger opponents such as Superman or Darkseid.

Batman has been present in other media, as well as in the comic books. The first major adaptation was the 1960s camp TV show starring Adam West, after which there have been several animated adaptations.

An important event was Tim Burton’s 1989 movie starring Michael Keaton, that launched a film series during the 1990s. In the same period, Paul Dini created Batman: The Animated Series where Batman was voiced by Kevin Conroy; the show gained a cult following and is generally praised as one of the best adaptations of Batman ever.

Christopher Nolan revitalised the movies with his Dark Knight trilogy. Batman is currently a part of the DC Extended Universe (DCEU), DC’s response to the lucrative Marvel Cinematic Universe.

Who is Black Panther?

Black Panther is a fictional superhero appearing in comic books published by Marvel Comics. He was created by Marvel legends Stan Lee and Jack Kirby, debuting in 1966’s Fantastic Four #52

Despite being a regular with Marvel, Black Panther has only recently become as popular as some other big superhero names like Captain America, Iron Man or Thor.

Black Panther is actually the alter ego of T’Challa, the king and protector of the fictional African country of Wakanda.

Black Panther is actually a hereditary title that is passed on to Wakandan rulers, but they have to prove themselves beforehand.

Interestingly enough, although the character debuted under the name Black Panther before the Black Panther Party was actually founded (October, 1966), Marvel’s editors tried to change his name to Black Leopard during the ’70s in order to avoid a connection with the BPP, but the new name was never accepted so they quickly “revived” Black Panther.

As a child, T’Challa’s father, T’Chaka, was killed by villain Ulysses Klaw, leaving the underage prince as the successor of the throne.

His uncle was regent until he became of age. T’Challa was obsessed with avenging his father and killing Klaw, which has driven a lot of his initial plots.

But he was also a very successful ruler, uniting the majority of Wakandan tribes under his rule. A lot of his initial stories focused on him wanting to kill Klaw.

As part of his training, he even summoned the Fantastic Four in Wakanda and fought them one by one to prepare for Klaw; he would later explain his motives and befriended the group. This all happened in his debut appearance.

Later on, Black Panther became part of the Avengers and the authors further developed his story.

An important moment was his fight against the usurper Killmonger, whom he defeated initially, before losing later on but Killmonger never actually usurped the throne because he fell into a coma after consuming a herb that was toxic for anyone outside the royal bloodline. T’Challa spared his life afterward, opting not to kill him.

The Black Panther is known for his characteristic vibranium suit and his superhuman abilities granted to him through a combination of Wakandan science and sorcery. He appeared in several derivative materials, the most famous among which are the MCU movies (including a solo movie) where he was portrayed by the late Chadwick Boseman.

Batman vs. Black Panther – Who would win?

We have given you a thorough introduction to these characters; now it’s time to see who would win in a confrontation between these two.

Before getting into any details, we’d like to talk about the basic powers and skills these characters have.

As for Batman, his powers are very, very – human. Batman does have some enhanced human attributes (strength, stamina, agility), he is extremely intelligent, but despite all of that – he is still human and has all the limitations of a regular human being.

He is heavily reliant on technology and is a great engineer, inventing and designing a lot of different utilities he uses in fights. This pretty much covers Batman’s basic powers and skills.

When we talk about Black Panther, we have to take consider the fact that due to him consuming the Hear-Shaped Herb, T’Challa has a lot of superhuman attributes (strength, speed, agility, endurance, senses), which are somewhat similar to Batman’s but on a higher level.

Also, as King of the Dead, T’Challa has some magical powers which are inaccessible to Batman. If you add all of this to his regular peak human attributes, you can get a general sense of just how powerful Black Panther actually is.

A simple comparison of their basic powers reveals that Black Panther is stronger than Batman. Although the two of them don’t have many different powers, Black Panther’s powers are a level above Batman’s.

Their intelligence levels are very similar, with Batman probably being a bit more knowledgeable than T’Challa, but that wouldn’t be of much help in a direct physical confrontation.

Also, T’Challa’s suit is much more resilient than Batman’s and the Dark Knight would have trouble piercing through it and actually wounding Wakanda’s ruler. When it comes to their knowledge of martial arts, they are on a very similar level.

The one thing where Black Panther definitely beats Batman are the magical abilities that he gains as King of the Dead.

Batman is a regular human and he does not have any magical powers. Sure, Peter Tomasi did make him a God at one point, but that isn’t really Batman’s basic form which we can use to compare with Black Panther.

So, the conclusion would be that Black Panther would defeat Batman in a direct physical confrontation – he is more powerful – but there is a catch.

The catch is Batman’s famous “preparation”. Namely, throughout the DC Comics history, Batman has demonstrated his ability to defeat even the strongest of foes, some of them being the strongest in the whole DC Universe.

He is a tactical genius and if a character has a weak spot – Batman will certainly find it. He has defeated Superman and Darkseid by managing to exploit their weaknesses, which makes him a very formidable foe.

Black Panther, on the other hand, never had to and never did fight such strong opponents like Superman or Darkseid and the two of them would easily defeat Black Panther.

So, seeing that Batman can defeat opponents that are stronger than T’Challa, he should be able to defeat T’Challa as well, right? Well, technically yes, but he would need to study his opponent and find a way how to defeat him.

T’Challa is a human so he has no specific weaknesses like Superman or Darkseid, which means that Batman would only have to think of a way to outsmart him in a fight, and he is definitely able to do so.

So, yes – Black Panther is stronger than Batman and would win in a fight between the two, but given enough time to think of a plan, Batman would certainly find a way to defeat the Wakandan ruler.