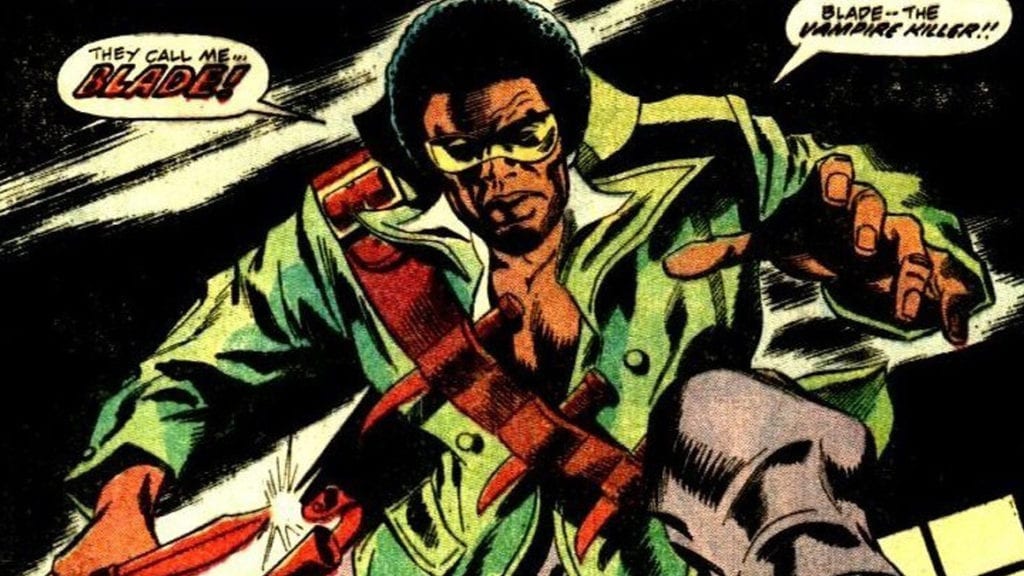 Blade is an interesting Marvel’s anti-hero with a lot of questions surrounding him. One of the biggest questions about him is can Blade die of old age?

His vampire genetics enable regenerative factors in his DNA which not only regenerate wounds and increase his abilities but also slow down his aging. Meaning it will take a long time for Blade to die of old age. But when he does, it is possible he will turn into a full vampire and live forever.

Marvel’s Blade features an action-packed storyline home to an unimaginable amount of twists and turns.

The story surrounds a character named Eric Cross, nicknamed Blade for his favor and mastery of the weapon.

The series makes many references to the Marvel universe as a whole, featuring other Marvel characters such as Dr. Strange, Wolverine, S.H.I.E.L.D, and even Spiderman.

Blade was born in the 1920s. Blade’s biological father, Lucas Cross, was the leader of a humanitarian secret society specializing in vampires. He sent his pregnant wife to England before he was wrongfully imprisoned. He was also dying from cancer, and there was not much hope for him.

His wife, Vanessa Cross – now going by Tara Brooks – managed to escape and find shelter at a brothel in London, which was owned by Madame Vanity. There were complications during her labor, and medical attention was given to her. However, her ‘savior’ would be none other than Deacon Frost, who previously turned vampire during a scientific experiment.

He then attacked her while she was going into labor, passing a series of enzymes that would alter the genetic code of the baby being born. This transformed the baby into a Dhampir or Daywalker – a half-vampire without the weaknesses. This would enable him to walk in direct sunlight.

Cross then attempted to slay the baby, but was caught during the act and fled the scene. Sadly, Vanessa did not survive the attack. But, the baby was physically unharmed. This is how Eric Brooks who would later be known as Blade came to be. He was now and orphan, and was raised by Madame Vanity.

Blade’s first urge to attack a vampire came about when he was only 9 years old. As he and Madame Vanity walked down the street, a man named Jamal Afari was attacked by two vampires. Jamal was in fact a veteran vampire slayer and had the situation under control. But, he was impressed by Eric, and went on to mentor him.

Eric’s first attempt at fighting off a vampire actually resulted in him accidentally murdering a human. It turned out that the man suffered from a disease that made him appear vampire-like, and was merely having a dispute with his wife before Eric staked him through the heart.

Eric fled the scene, after which Madame Vanity and Jamal Afari sent him to America to avoid arrest. It is after this that his adult life begins to unfold, and he goes through a series of mostly morbid experiences including the loss of many friends and loved ones.

Why is Blade so special?

Blade is extremely unique in the fact that the vampirism virus resulted in his body mutating into a daywalker instead of becoming a vampire. He was infected when he was a baby, and therefore became something that vampires would one day fear.

Other vampires and foes have made many attempts at using his blood for their own nefarious agendas, believing that Blade’s blood is the key to having perfect vampire genetics – all the strengths without the weaknesses.

Coupled with is in-depth knowledge of vampire occults, combat, weaponry and tactics, he is truly every vampire’s darkest nightmare. This is in addition to the resounding jealousy that they have towards him for his ability to walk in daylight.

Can Blade die of old age?

According to the Marvel Handbook

, Blade has vastly reduced aging due to his partial vampire heritage. Although this was originally the result of an attack by Deacon Frost, a scientifically created vampire, he was also bitten by Morbius the Living Vampire later in life.

The enzymes that had been released in Blade’s blood enabled him with immunity to classic vampire infections, and gave him supernatural senses as well as age resistance. Being bitten by Morbius only fuelled his powers, giving him many of the traditional abilities of a vampire.

This included further increased strength, senses, mobility, accelerated healing and stamina. Since he was a daywalker, this potentially inhibited the development of vampire-related weaknesses from Morbius’s bite.

As a result of his vampire genetics, there are regenerative factors in his DNA which not only regenerate wounds and increase his overall abilities, but also slow down his aging drastically. The exact rate of this change to his DNA has not been specified by Marvel.

In the event that he does not die from a fatal injury, he will live for an indefinite time span. Despite the fact that Blade will most probably live a lengthy life and maintain his youth throughout, this ‘slow aging’ factor points to the possibility that Blade may one day become old and die.

That being said, Blade ‘dying’ of old age may not have the same outcome as is assumed. It is quite possible that Blade will develop into a full blown vampire by the time his death due to old age is imminent. This has been stated many times in the Marvel comics, the movies and the TV series.

Coupled with the fact that he has been infected with the vampire virus multiple times, it’s quite likely that the total vampirism viral load within his body may slowly increase with his age. There is evidence to suggest that he will never be able to effectively use any serums or cures to aid his condition, and that he will always revert and succumb to his vampire genetic code.

His genetic code and vampire abilities are always expanding at a rapid rate. But, Blade is a hybrid. Although there is plenty of screen time for his vampire side, there is a part of him that is still human. Since these powers are ever increasing, there are two possible outcomes, both of which do in fact result in him ‘dying’ of old age.

The first possibility is that the vampirism virus will continue to push Blade closer and closer to full vampirism. Considering his slow aging and increased lifespan, this would result in a full transformation before he ages enough to die of old age.

Since being a full vampire involves the human soul, personality or natural character being overwhelmed by the virus, it can be considered as being dead, much like turning zombie from the T-virus would.

The second possibility is that Blade will die of old age, as his human genetics eventually give in, resulting in his physical death. The vampirism virus itself never dies, even in a deceased host. The likelihood of Blade remaining dead as opposed to being reborn as a full blown vampire is slim.

So, yes, Blade can die of old age. But, the odds of Blade staying dead are low, and something like this may lead to an even more intense plot twist to the series as opposed to its end.