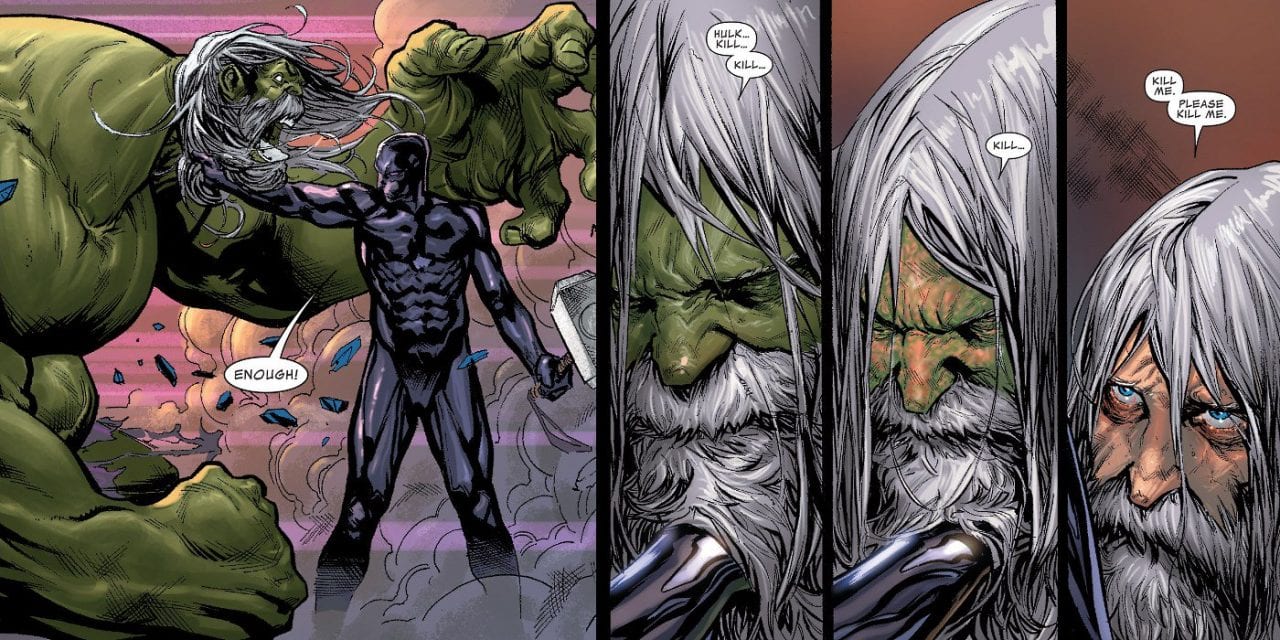 Continuing on our recent article on how the Hulk can die, we’re going to analyse one specific manner of death for the Green Giant – old age. This is an often-debated question and we are going to dig into the facts in order to give you a precise explanation of whether it is possible and if it is, how it is possible. So, if you want to know more – keep reading!

Theoretically he can, but he can live for so long that he is – in fact – immortal when it comes to aging. Bruce Banner, though, does age and if Banner died before transforming into Hulk, the Hulk would die as well.

How can Hulk die?

Although we have analysed this question in a separate article, we think it would be better if we went through the answer once more. So, here are the known ways by which the Hulk can die or be killed:

This is one of the most often asked questions in comic book fandom. Namely, Hulk is usually depicted as looking more or less the same all of the time, and there are often-present implications that Hulk is immortal and that he does not age. Well, that is both true and it is not true.

Strictly speaking, the Hulk does indeed age, but due to his regenerative factor, he does that so slowly that it seems that he does not age. And indeed, the Hulk does manage to keep his physical appearance the same as decades and – in some cases – even centuries pass. Some future versions of the character (like Maestro or the imprisoned version captured by King Thanos) do show signs of ageing (bald head, grey beard), but his physique remains the same and Hulk does seem to be even stronger as time passes.

So yeah, as you can see, the Hulk does age, he gets older with time and will show some signs of ageing, but he does that so slowly that it is practically unnoticeable.

Can Hulk die of old age?

Now that we’ve cleared up whether Hulk ages, we can answer the question – can he die of old age? Theoretically, he can, but it’s a bit complex. Let us see how and why.

As we’ve said, the Hulk does age and, theoretically, at one point in the distant future, he would also die. The issue is that this moment is so far in the future that it is debatable whether there would be any life remaining at all. The one-shot comic book Hulk:

The End (2002) implies that Hulk remains as the last living being at one point in the future. He’s more resilient than cockroaches it seems. So, yes – in theory, he would die from old age, but don’t count on it, really.

But, there is an easy and effective to “kill” the Hulk by ageing – Bruce Banner! As a human, Bruce Banner ages normally and his body does not have the necessary regenerative factor to remain immortal. This means that Bruce Banner can only live as regular humans can, which would, in a best-case scenario, mean that he could potentially live for about 120 years, but even that is a stretch. So, after these 120 years, Bruce Banner would die, but while he is Hulk, he would technically not die until he transforms back again. If he transformed back, Banner would instantly die and with him, the Hulk would also die. Hulk realises this in one comic, facing the fact that if he transformed back, he would die.

And that answers all your question. Yes, the Hulk does age, but extremely slowly and yes, he can die of old age, but it is a truly complex process and you shouldn’t really count on it, unless you have an effective way of transforming him back to Bruce Banner and killing the host and the monster alongside him.