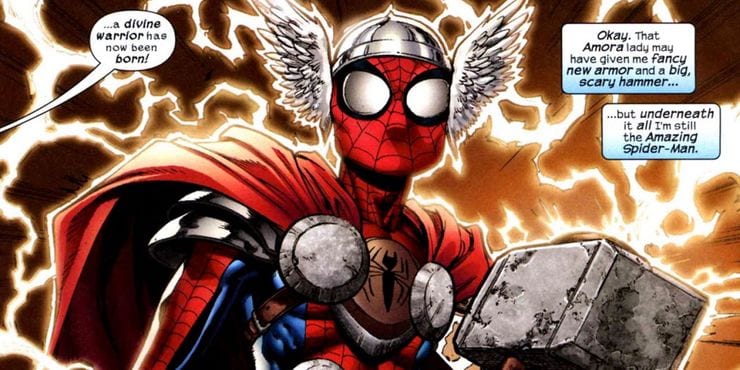 We all know that Spider-Man is one of the most moral Marvel superheroes, with very high standards that he always adheres to. This is a reflection of Uncle Ben’s moral maxim “with great power comes great responsibility”, which Spider-Man adheres to out of respect for his deceased uncle. Where are we going with this? Well, we want to test whether Spider-Man is worthy of lifting Thor’s hammer, Mjolnir, so if you want to know the same thing – keep reading.

The Peter Parker version of Spider-Man is not able to lift Mjolnir, because he’s not considered worthy by the Hammer itself, as his will is not strong enough.

Spider-Man is the superhero alter-ego of Peter Parker, a character appearing in comic books published by Marvel Comics. He is a superhero from New York City and one of the most popular comic book characters in history. He was created by Stan Lee and Steve Ditko, making his debut in Amazing Fantasy #15

(1962). Since then, Spider-Man has appeared in numerous solo volumes, but also as part of other series and teams, most notably the Avengers.

Although not the only one to don the costume of Spider-Man – the most notable successors being Miles Morales and Doctor Octopus himself – Peter Parker is definitely the most famous Spider-Man, which is why we are going to talk about him in this article.

Peter Parker was born in New York to Richard and Mary Parker, but was raised by his uncle Ben and aunt May Parker, due to his parents dying in a plane crash. The comic books dealt a lot with the issues of adolescence, growing up and Peter’s constant financial struggles. The life of an average teenager changed when he was accidentally bit by a radioactive spider, which gave him superhuman abilities, including, but not limited to shooting web from his body or climbing walls. Realising that he has become a superhero of sorts, Peter Parker designed a suit for himself and became Spider-Man, your friendly neighbourhood superhero.

Spider-Man mostly operates out of Queens and, along with fighting regular criminals, he battles against a gallery of famous rogues including Vulture, Scorpion, Rhino, Lizard, Mr. Negative, Venom, Green Goblin and his nemesis, Doctor Octopus. Spider-Man also has to battle against the negative propaganda advocated publicly by J. Johan Jameson, the publisher of the Daily Bugle, who leads an active smear campaign against Spider-Man, despite all the good he does for the city.

Ironically, it is J. Jonah Jameson who employs Peter Parker, not knowing his superhero identity, as a photojournalist for the Bugle; Parker made a career by constantly bringing in great photographs of Spider-Man. Peter Parker’s private life is also examined in the comics, especially the impact of Uncle Ben’s death and his love relationships with Mary Jane Watson and Gwen Stacy.

Usually a standalone hero, Spider-Man has been a member of the Avengers since the 2010s. Spider-Man’s membership (or rather his failed attempts to join the group before the 2010s) in the team was a running gag in the comics, as well as his relationship and friendship with Deadpool.

Due to his popularity, Spider-Man was featured in practically all of the derivative materials. He has had several animated shows, three movie series (portrayed by Tobey Maguire, Andrew Garfield and Tom Holland respectively), animated movies and video games for several consoles.

In order to fully comprehend why Spider-Man can or cannot lift Mjolnir, we have to analyse his powers, which is what we intend to do in this section.

His most pronounced human abilities are his intelligence and his resourcefulness, but this is all augmented by his superhuman abilities gained from being bitten by a radioactive spider. Thus, Peter Parker gained a lot of spider-like abilities, such as wall crawling, the ability to shoot webs from his body, an enhanced immune system and his famous Spider-Sense, used to detect approaching danger. But, along with that, he has gained superhuman strength, speed, stamina, agility and durability, along with a very specific healing factor that is always helpful in his fight against crime.

His strength has been the topic of much debate, since he’s usually perceived as weak (he also has a very slim body type). Yet, Spider-Man can – without any additional enhancements – lift an amazing 10 tons! This has been proven in comics repeatedly, especially in some stories where he was – with enhancements – able to lift an incredible 130 tons! So, if you were ever doubting Spider-Man’s strength, just remember that he was able to support a building from crashing down on him.

Now, let us see his official numbers, as per the Official Handbook of the Marvel Universe A-Z (2010)

Spider-Man is definitely powerful enough to lift Thor’s Hammer, that much is obvious, but the worthiness test encompasses much more than that. In the following paragraphs, we are going to analyse whether Spider-Man satisfies all the necessary criteria.

Mjolnir and the Worthiness Enchantment

Mjolnir is the name of Thor’s enchanted hammer in both real-life Norse mythology, as well as the Marvel comic book universe. It is a magical hammer crafted by the Dwarves on Odin’s request and made from the rare Asgardian metal called Uru. Odin put additional enchantments on the Hammer to make it powerful and indestructible, but also special in terms of its carrier. The latter refers to the Worthiness Enchantment.

The Worthiness Enchantment is a powerful enchantment put on Mjolnir by Odin, that prevents anyone who is deemed unworthy of even picking up the hammer, yet alone use its powers. Regardless of their physical strength, an unworthy person will not be able to move the hammer from its place. The only exception to this rule is when the hammer floats in the vacuum of space – you can pick it up, but it remains unusable.

To wield and use Mjolnir, a person must be worthy, as prescribed by Odin. Even Thor, to whom the hammer was initially given, has to prove his worth, or he won’t be able to lift Mjolnir, which goes to show how much magic Odin put into the hammer. Odin is the only one who can change this rule and can give others the power to use it; Thor cannot change the magic, but if he is worthy, he can give that power to someone else.

Worthiness is not something that is explicitly defined, but it is assumed that one must have a good and noble heart, a strong will and the determination to what is necessary (even kill, perhaps) to save those he must protect. Sheer power is not an important factor, as well as each of the criteria individually – they must all be present for a person to be considered worthy. This is why some superheroes are not able to lift it, mostly because they lack the determination to do anything that is necessary to save the day.

Now that we have analysed everything, we can answer the question – can Spider-Man lift Mjolnir? No, he cannot.

Spider-Man definitely has a good heart, he is a superhero without a doubt. He is also powerful enough, and is generally strong willed (despite some episodes of self-doubt), but what he lacks is the final determination to do what is necessary to save the day. Spider-Man does not kill; this is why he constantly fights the same enemies, because they always find a way to escape the authorities. Spider-Man just doesn’t have that strong determination that superheroes like Thor, Captain America or Captain Marvel – all of whom have lifted the hammer – have. They are, without a doubt, ready to kill if it would save the world; Spider-Man doesn’t have that in him and that is why the hammer hasn’t and probably won’t for some time consider him worthy.

As you can see from the image above, Spider-Man is wielding Mjolnir! This happened in the out-of-continuity, alternative reality story printed in Marvel Adventures: Spider-Man #40 (2008), where Enchantress used Spider-Man as a pawn in her plan to take over Asgard. Spider-Man was given a replica of Mjolnir with similar powers and he fought quite well, until Thor arrived and crushed his replica with one hand. This is the only time Peter Parker actually lifter Mjolnir, but it was a replica and nothing more.