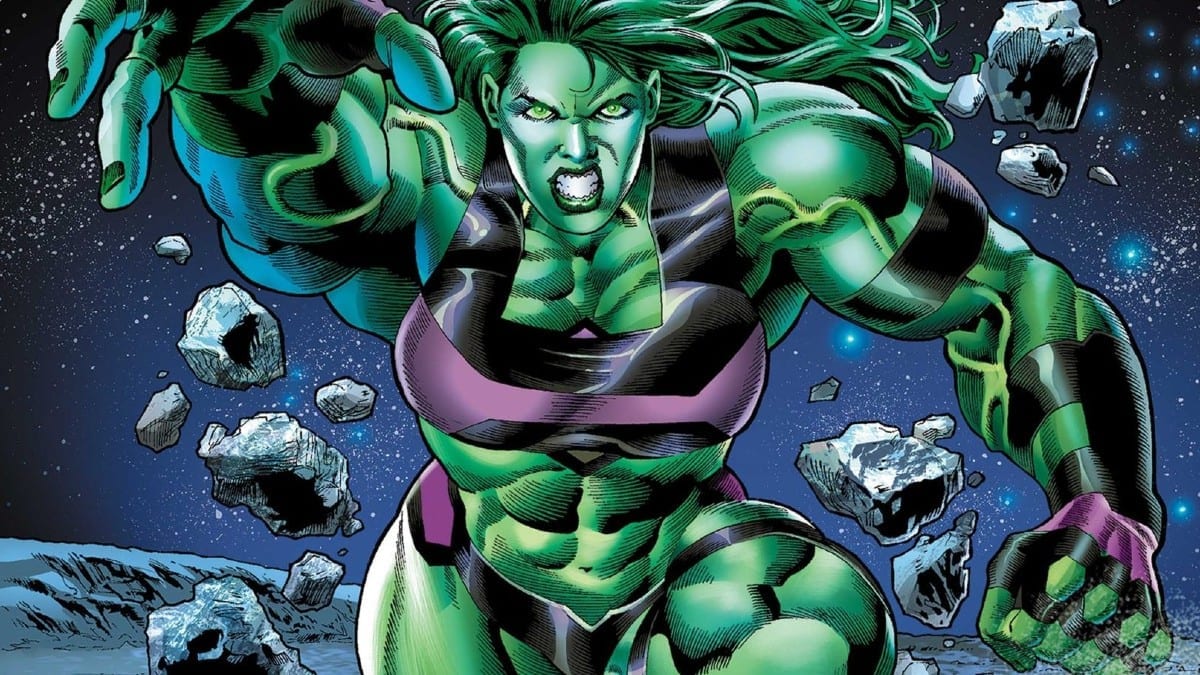 The female version of the Green Goliath has earned the right to be as famous as her male counterpart. And in this article, we will focus on how strong She-Hulk is and does she stand a chance against her more famous cousin.

Walters retains her intelligence and emotional control when her green counterpart takes over. This lethal combination of brains and brawn makes She-Hulk a beloved, smart, and extremely powerful superhero, that becomes even stronger as her human form progresses in strength.

(cover-dated February 1980) in the Marvel Universe. Jennifer Susan Walters, a lawyer by profession, had to undergo an emergency blood transfusion and received blood from none other than her cousin Dr. Bruce Banner, The Hulk. This transfusion introduced gamma radiation to Jennifer’s blood, and she soon transformed into the super-persona She-Hulk.

How strong is She-Hulk?

Unlike the Hulk, Walters retains her intelligence and emotional control when her green counterpart takes over. This lethal combination of brains and brawn makes She-Hulk a beloved, smart and strong superhero featuring alongside the Avengers, the Fantastic Four, Heroes for Hire, the Defenders, Fantastic Force, and S.H.I.E.L.D. Several incidences can be pin-pointed showcasing her immense strength.

Walters is trained by The First Avenger Captain America, Guardian of the Galaxy’s Gamora, and Drax the Destroyer. Even in her human form, Walters is a well-trained combatant and skilled martial artist and does not necessarily need her green alter ego for protection. Mister Fantastic (Reed Richards) who suggested Walters to weight train for building her strength levels had an idea that the stronger Walters gets in her human form, the stronger is her greener self, the She-Hulk. She-Hulk possesses superhuman strength and can lift 75 tons. She is continuing her training to lift even greater weights, and the uppermost limit of her potential strength is as yet unknown.

It was She-Hulk who defeated Thanos in She-Hulk #13

. A synthetic duplicate of Thanos with all the Titan’s original power was by no means a weak enemy, the most feared villain was swiftly defeated by She-Hulk which took many heroes banding together in the Marvel universe to take down.

“, She-Hulk unleashed her unstoppable fury resulting in a berserker rampage on those around her. Scarlet Witch’s chaotic magic is well known for causing trouble in the Marvel universe. In “Avengers Disassembled” Scarlet was responsible for pulling the Avengers apart, Ant-Man being killed in blast and Vision attacking the Avengers Mansion with a horde of Ultron robots. Bewitched She-Hulk with her unstoppable fury ripped apart Vision in half with her bare hands. She almost killed Captain America and destroyed a small town in Idaho. Lionheart’s Sword of Might – a powerful mystical weapon, able to cut through anything – didn’t even leave a scratch on She-Hulk forcing the remaining avengers to take her down.

Not only the Titans or the other Avengers, but she has also successfully stood against the mightiest Olympians like Zeus and Hercules. Greek mythology-inspired some of the strongest characters in the marvel universe. Out of all Zeus is one of the most powerful deities rarely intervening with the earth. In Avengers #247

, when Zeus came to destroy the planet earth, it was a hard battle for the Avengers stopping him but She-Hulk delivered damaging blows to Zeus. This shows the massive strength of She-Hulk and that she is a worthy combatant even against the mighty Olympians.

One other such incident took place between the demigod Hercules and She-Hulk. She challenged Hercules to an arm-wrestling match. While Hercules strained to win, She-Hulk barely broke a sweat, losing the match to ensure to not hurt Hercules’ ego.

Walters also received a power-up from a fallen god celestial named Eson. It was during an invasion by the Dark celestials when Jennifer spoke to Eson. He told her that humanity had been created by a fallen Celestial to provide a cure against their enemies, the horde. He then connected to Walter’s mind and teleported her into the midst of the Avengers’ battle against the Celestials, where she in her much stronger form as the She-Hulk unleashed her more savage side and began to wreak havoc on the dark side.

She later joined Thor in taking the Blood of Ymir, in which they grow into giants with mighty power enhancements. After the battle, it was said that she retained some of the enhancements. In 2018’s Avengers #8, Doctor Strange made a reveal that her gamma output has “skyrocketed, in the most explosive ways” meaning she can be more explosive than Bruce.

She-Hulk is unique. Jennifer Walter’s strength in the form of She-Hulk is proportional to her strength as in her human form. She can be seen working out the same workout regiment as Thing. But eventually, these weights became far too light for her. She naturally increases her strength in one form and the strength in the other increases. This unique aspect also makes her one of the strongest non Hulk creatures in the marvel universe. Even when she is calm, she is almost as strong as God-like characters Thor, Hercules, and no doubt stronger than the Thing.

How strong is the red She-Hulk?

A mysterious female version of Red Hulk first appeared when the Red Hulk with his team code red was hunting down Domino. In a deadly showdown against Wolverine, Red Hulk was about to be killed when Red She-Hulk appeared and protected Red Hulk long enough in challenging Wolverine. Red She-Hulk’s identity was a mystery until she was stabbed with a sword by Skaar, the son of Hulk and Caiera the Oldstrong, reverting to her human form revealing to be Elizabeth “Betty” Ross, daughter of the Air Force General Thaddeus Ross and romantic interest of the Hulk.

As the Red She-Hulk, Betty possesses superhuman strength, lifting 75 tons. She also possesses speed, stamina, and durability, and a healing factor that allows her to easily survive what would normally be fatal injuries to humans. In Hulk vol.2 # 16 2009, She was stabbed by a wolverine. She not only survived but also distracted him by spitting acid saliva on his face.

Red She-Hulk’s strength level is so vast that she can break the laws of physics just like the Hulk, punching her way through dimensional barriers between different universes. However, she was defeated easily by the original She-Hulk which was purely due to lack of experience.

She also possesses Red Hulk’s ability to absorb energy such as gamma radiation from other Hulks, reverting those beings to human form, and at least temporarily boosting herself. Red She-Hulk has yellow blood. This helps her produce yellow energy from her eyes when angry that discharge energy by touch.

Even when Betty’s red counterpart takes over, she maintains control of her humanity, though if extremely angered she can become “pure Hulk”, further increasing her strength but losing control of her mind. However, her weakness is that she can be returned to human form if she is suddenly startled or frightened, though she can revert to her Hulk form at will.

Who would win Hulk or the She-Hulk?

In a showdown between Hulk and his cousin She-Hulk, there is no doubt Hulk would be the winner. But it would be a different scenario if the showdown takes place between Bruce and Walters. The transformation of Walters to She-Hulk is unique and she can put a good fight, without giving up very easily to Hulk’s smash.

In any given situation, She-Hulk is more reliable. Not like Hulk, in her transformation, her rage is more grounded and does not lose her human intelligence, proving her to be a worthy team member than Hulk. Moreover, her transformation is faster in comparison to Hulk. It is due to his larger mass and size, his transformation takes a bit longer. This would prove to be very crucial in the landing first blow. But this would in turn fuel the rage of the green beast. The angrier Bruce gets the mightier and savage is the Hulk.

However, it was Doctor strange in Avengers #8 2018 who revealed Walters’ gamma radiation has skyrocketed in the most explosive ways. It can be interpreted that she might and is capable of turning more explosive than Bruce.

If She-Hulk allowed her savage side to take over more often, she could beat almost anybody in her way. On two occasions, she was able to put on a great fight and stalemate with Hulk. She doesn’t just have a fraction of his powers she has all of it.

She was even strong enough and durable enough to take a blow from World War Hulk and give a blowback drawing blood from him. In the calm state, Walters would easily take down Bruce, as she is a well-trained combatant and skilled martial artist.

But her green counterpart, She-Hulk rarely unleashes uncontrolled rage. It was only during “Avengers disassembled”, bewitched by Scarlet’s chaotic magic; she caused a berserker rampage around her. On the other hand, Hulk is less known for capping his rage and being grounded. In such a scenario, savage Hulk would win and always have an upper hand over She-Hulk.