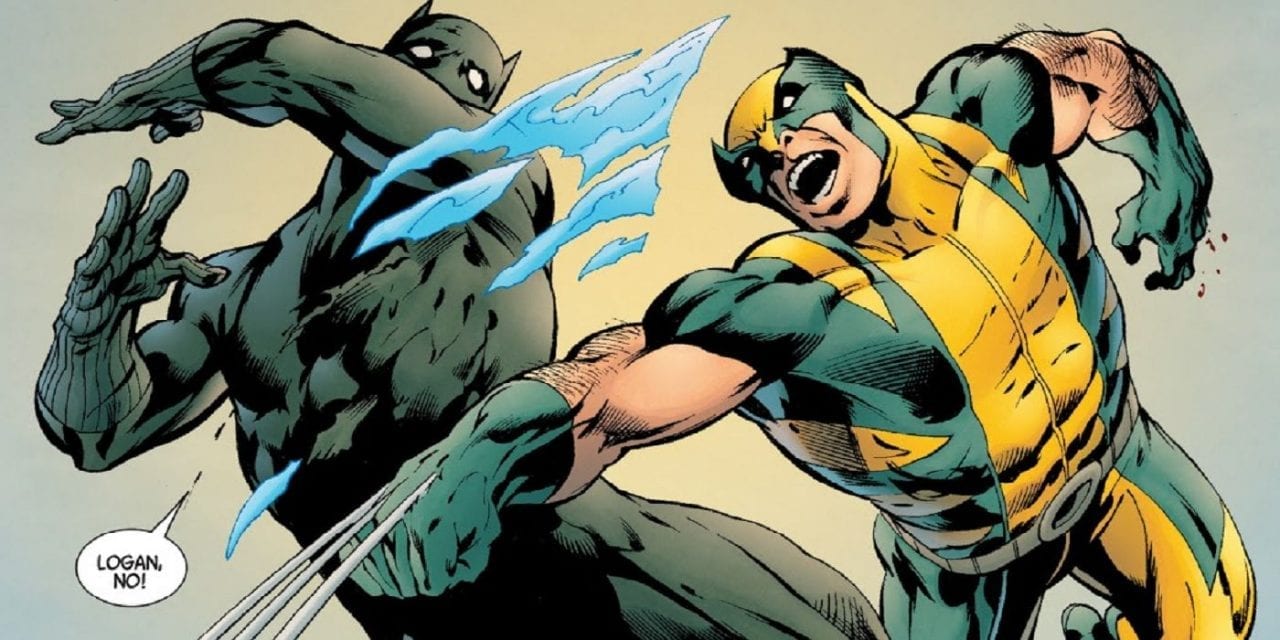 If you’re reading this, you’re probably acquainted with Mendeleev’s periodic table of elements, which was published in 1869 and is the main reference for all known chemical elements. If you know your chemistry – and we assume you do – you’ll know that neither adamantium, nor vibranium are present in the periodic table, although they do sound like the names of chemical elements, right? Well, keep reading to find out what they are and how they’re related to each other.

Along with its chief rival, DC Comics, Marvel Comics is the biggest and most important mainstream comic book publisher in the United States.

Adamantium is a fictional metal alloy appearing in stories published by Marvel Comics. It first appeared in Avengers #66 (1969) and was created by writer Roy Thomas and artists Barry Windsor-Smith and Syd Shores. It is one of the strongest and best-known fictional metals in the Marvel Universe, but also generally in the history of American comic books.

The etymology of the word “adamantium” is quite interesting. Namely, the word itself is a pseudo-Latin neologism (real Latin: adamans, from original Greek ἀδάμας [=indomitable]; adamantem [Latin accusative]) based on the English noun and adjective adamant (and the derived adjective adamantine) combined with the neo-Latin suffix “-ium”, common in the nomenclature of chemical elements.

The adjective adamant has long been used in the English language to refer to the property of impregnable, diamondlike hardness; there is also a more metaphorical application, but that is not relevant here. The noun adamant describes any impenetrably or unyieldingly hard substance. Formerly, it was used to describe a legendary stone/rock or mineral of impenetrable hardness and with many other properties, often identified with diamond or lodestone.

Adamantium is an alloy, which means it has to be molded using different components, which are usually kept separate (typically in blocks of resin) before the whole procedure. The blocks are melted together and mixed, while waiting for the resin to completely evaporate. You then have a total of eight minutes to mold it.

The molecular structure of adamantium is so strong that once it’s moulded (or after eight minutes), you cannot mould it or change it again, even if you manage to keep the temperature so high that it stays in its liquid form. It is also very durable and can last for aeons, as the adamantium skull Wolverine once discovered in Apocalypse’s laboratory suggests.

In its solid form, it is described as a dark, shiny grey, like high-grade steel or titanium. It is extremely strong and is practically indestructible when in its solid form. It can penetrate through most materials with minimal force, which is why it is an excellent weapon.

Adamantium was first introduced as the alloy forming Ultron’s outer shell in 1969. Later, it was incorporated into Wolverine’s skeleton and claws; the same thing happened with Sabertooth, Lady Deathstrike (although she has talons instead of claws) and X-23 (but only in her claws).

The supervillain Russian has also received adamantium when he was resurrected. Likewise, Bullseye’s broken vertebrae were fixed using adamantium. The last known presence of adamantium is in Captain America’s second shield, which was an alloy made using adamantium and vibranium.

Unlike adamantium, vibranium is not an alloy, but an actual fictional metal from the Marvel fictional universe. It first appeared in Daredevil #13 (1966), written by Stan Lee and illustrated by John Romita Sr. Along with adamantium, it is one of the most famous fictional metals.

Vibranium is a very strange metallic element with very peculiar properties. It is usually defined as a metal that can absorb, store, and release large amounts of kinetic energy.

The comics revealed that vibranium came to Earth via a meteorite that landed on the planet 10,000 years ago. Today, “true” vibranium is mined and present only in the region of Wakanda, but there are several variations of the primary metal (see below). Vibranium is very and thus very, very valuable.

The most common variety of vibranium is Wakandan vibranium, found and mined in the African nation of Wakanda. This metal can absorb, store and release large amounts of kinetic energy, which is very useful in combat. There are limits to how much energy it can absorb.

It can be manipulated and used with other materials and metals, but it is also very dangerous and can cause much damage if it explodes. It is also a powerful mutagen – a lot of Wakandan people have gone through certain mutations after being exposed to it, but it also changed the flora and fauna – and is believed to increase mystical energies.

The second variety is Antarctic vibranium, also known as Anti-Metal. This was the first variety of vibranium discovered by humans. Anti-Metal is much stronger and it has the ability to cut through the molecular structure of other materials, which is why it is such a potent weapon. It is likewise a powerful mutagen.

Wakandan professor Obinna Nwabueze discovered a third variety of vibranium known as Living Vibranium. The subatomic structure of this variety, found in the caves of the Dora Milaje, the king’s personal guard, showed that it had some form of sentience.

This “living metal” – as we can call it – has a lot of different properties but due to it having its own mind, it is also extremely volatile and potentially dangerous.

Along with these, there are also at least two types of artificial vibranium. The NuForm vibranium was created as an artificial replacement for “true” vibranium, although it had the tendency of degrading into Anti-Metal if not properly taken care of. It is not known why it was created.

The other variety is reverbium, which was a faux metal that had the same characteristics as “true” vibranium, only significantly amplified. This is why it is so dangerous.

Vibranium is also associated with a phenomenon known as “vibranium cancer”, a small sub-molecular imperfection that first emerged in Captain America’s shield and then spread to all other vibranium-based objects.

The “cancer” grew until the molecular bonds of the shield were completely broken down, shattering the shield. The shattering effect continued to spread to other vibranium around the globe, completely unconnected to the shield.

This phenomenon led to a violent detonation of any vibranium the “cancer” came across. If it reached the large source of vibranium in Wakanda, it could destroy the world.

The most famous objects made out of vibranium are Captain America’s famed shield (the first one, but the second one also contained vibranium, as well as adamantium) and Black Panther’s suit, which was meshed with vibranium.

Which one is stronger?

After reading everything about the two types of metals, you might be thinking – but they seem to be the same thing, no? Well, they… aren’t. While both are extremely powerful elements, and are among the strongest and most durable in the Marvel universe, there are several key differences between them, which we are going to analyse in our text here.

First of all, when talking about adamantium, you have to know that “true” adamantium rarely appears in the comics, with a few notable exceptions. What we usually see is the “secondary” variant, which – although strong – is still significantly weaker than “true” adamantium.

Having said this, “true” adamantium is described as being the strongest metal in the Marvel Universe and it can cut through practically anything.

In a fight between Wolverine and Black Panther, which was essentially a clash between adamantium (Wolverine’s claws) and vibranium (Black Panther’s suit), Wolverine was able to cut through Black Panter’s seemingly impenetrable suit and even draw blood, which proved that adamantium is – in this aspect – stronger than regular vibranium.

On the other hand, Wolverine wasn’t able to destroy Captain America’s shield when the two of them clashes, but that is the only known exception and is a consequence of the fact that Cap’s shield was actually a strong alloy.

On the other hand, vibranium is generally present in two forms. The first is the “true”, Wakandan form, which can absorb kinetic energy and is durable, but – as we’ve established – is not as strong as “true” adamantium.

Comparatively speaking, Wakandan vibranium is just a tad weaker than “secondary adamantium”, which means that it actually couldn’t stand a chance against “true” adamantium.

On the other hand, Anti-Metal – another common form of vibranium – is much stronger and is known to be able to destroy (liquify) and metal due to its molecular characteristics. So, could it liquify adamantium? It could!

As you can see in the panel above, Misty Knight’s prosthetic arm, which is made from Anti-Metal, was able to easily liquify the adamantium sword, which gave the superheroine the upper hand in this fight.

Still, there is one more metal which we have to mention, and that is – adamantine. Namely, adamantine is thought to be the strongest metal in the Marvel Universe and it is basically a “godlier” version of regular adamantium.

It is even said that adamantium was created during an alchemical procedure that was meant to produce adamantine. Adamantine is even stronger than Anti-Metal.

But, each of them would be completely useless when faced with adamantine, adamantium’s “godly” predecessor, the strongest metal in Marvel’s universe.