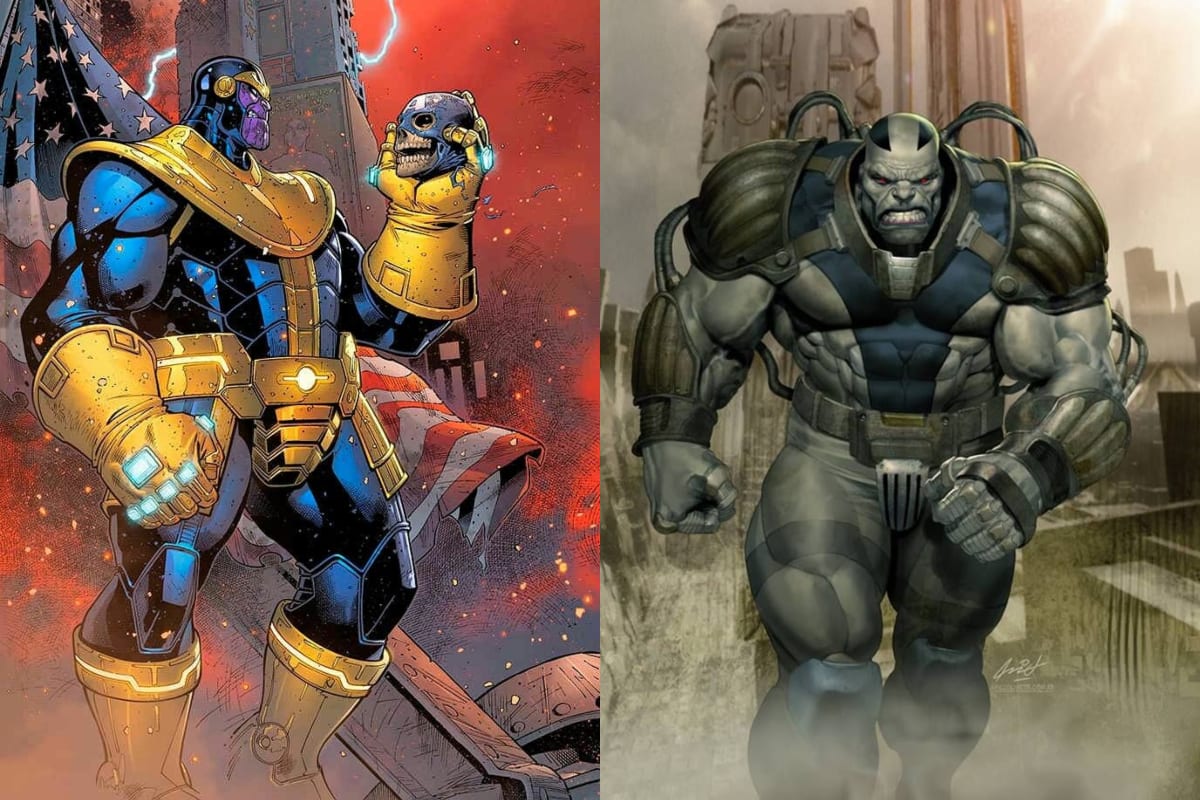 Comparing characters’ powers is always interesting because such comparisons might reveal who the stronger is between characters who’ve not had the pleasure of facing each other or have done it only on several, rare occasions. Today, we are going to compare Apocalypse, a supervillain from the X-Men franchise, and Thanos, the Mad Titan and one of Marvel’s ultimate supervillains. So, who’s stronger?

Despite both of them being very powerful, we think that Thanos would ultimately win in a fight between them. Thanos has a long history of fighting against the whole Marvel Universe and is always considered to be one of the strongest villains in the Marvel Universe, which is why we think he could beat even Apocalypse.

Apocalypse is a fictional character from the X-Men franchise, a large franchise within the fictional universe created by Marvel Comics. Apocalypse made his debut in 1986, first in a cameo appearance in X-Factor #5

, before making a full appearance in X-Factor #6

. Apocalypse was created by Louise Simonson and Jackson Guice and was actually a chance villain, since the original idea was for his role in the X-Factor to be given to Daredevil’s villain Owl, but since the original writer of the series left after writing the first five issues, a new team was brought in and Apocalypse was created for narrative purposes, soon becoming a very popular X-Men villain.

En Sabah Nur, the mutant who would later be known as Apocalypse, was born in Ancient Egypt and is probably the first mutant in history to manifest his X-Genee. Due to him having gray skin and blue lips, he was shunned by his people and abandoned as a child. Saved by Baal of the Sandstormers, the child was named En Sabah Nur, which translates to as “The First One”.

Apocalypse had a really tough time in Ancient Egypt, even getting killed in one instance, only to be revived thanks to his mutant powers. He would later use this aspect to become more powerful after each resurrection. He is a very philosophical villain, developing a theory and strategy of mutant supremacy in a harsh world where humans look at mutants as enemies. He also thinks – and that is a reflection of his past experiences – that only the strongest and the fittest need to survive, which is why he doesn’t even care for those mutants whom he considers weak. His ultimate goal is to initiate a large war between the humans and the mutants, after which the mutants would rule over Earth with him as their supreme leader.

Due to his tragic history and dark character, Apocalypse has become a very important supervillain within the X-Men franchise and has appeared in a variety of derivative materials, such as TV shows, games and movies. In the latter, he was portrayed by Oscar Isaac.

Who is stronger – Apocalypse or Thanos?

Both Apocalypse and Thanos are very powerful. Apocalypse is an Omega level mutant and one of the strongest mutants in existence, although he has been beaten by both the X-Men and Magneto on separate occasions. Thanos, on the other hand, is one of the most powerful beings in the whole universe, a cosmic warlord whose power is so vast he could beat almost anyone in the Marvel universe.

Some of Apocalypse’s powers include immortality, superhuman strength and intellect, superhuman durability, the ability to teleport, psionic manipulation (including telekinesis and telepathy), self-molecular manipulation (which allows him to change shapes and sizes, since he can manipulate his own body on a molecular level) and energy manipulation (he can draw energy from different sources and use it to increase his own power). On the other hand, Thanos is likewise immortal, has superhuman strength, speed and durability, he is practically invulnerable, can teleport and regenerate, he can manipulate matter, use telepathic abilities, manipulate energy and even fly; he also has superhuman intelligence. Thanos strength level is that of a Class 100+, while Apocalypse’s changes, due to him being able to harvest external energy, which means that his strength level is quite often incalculable.

The Official Handbook of the Marvel Universe A-Z (2010)

So, what can we conclude from this? As stated, both Apocalypse and Thanos are extremely powerful, but based on our comic book experiences and the official numbers above, Thanos would beat Apocalypse. Easily? That one’s not so clear. In regular conditions, certainly – Thanos is much stronger, but if we imagine a situation where Apocalypse draws an infinite amount of energy, he could prove a strong opponent for the Mad Titan. Still, Thanos has managed to kill the while universe in the King Thanos storyline, while Apocalypse was regularly beaten by some nominally weaker heroes, something that would never happen to Thanos. This why we think – and we think most people will agree with us – that Thanos is stronger than Apocalypse and would beat him in a direct fight.