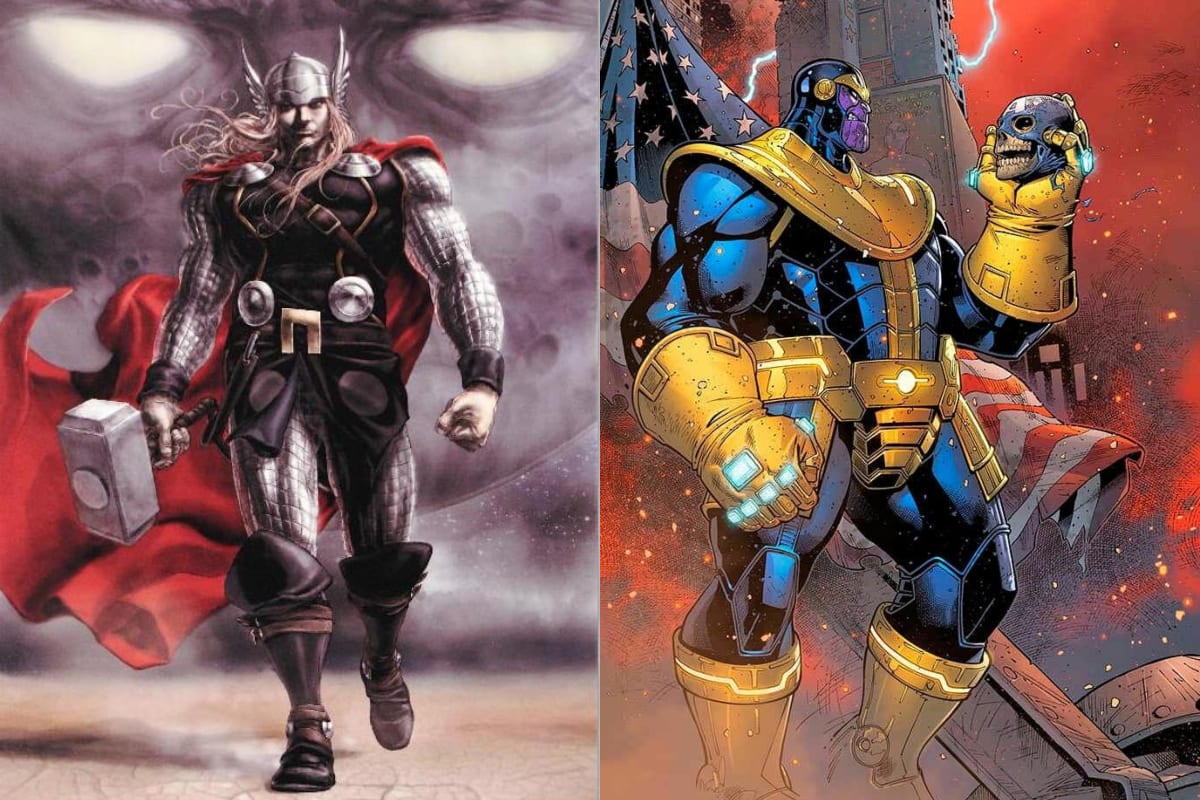 You’ve all probably seen both Infinity War and Endgame, two movies where the Avenger Thor actually had the upper hand against Thanos, the Mad Titan. Surely, Thanos won in the former with the help of the Infinity Gauntlet, but lost his head (literally) in the latter. So, is Thor really stronger than Thanos or was this just for the sake of the movie?

Based on what we know from the comics, Thor and Thanos are very equal in terms of power and it is difficult to give an outright answer. When enhanced with extra abilities, Thor could easily beat Thanos, but the same goes vice versa, which is why we think that there is no real winner in this situation.

Thor Odinson is a fictional superhero appearing in comics published by Marvel. He was created by Stan Lee, Larry Lieber and Jack Kirby and was inspired by the Norse god Thore, with whom he shares most of his traits. He made his debut in the comic book Journey into Mystery #83 (1962)

and has since become an essential name for Marvel Comics, being the center of several stand-alone series and part of several superhero groups and series. Thor was initially created by Kirby for DC Comics back in the fifties, but the character never achieved any sort of prominence, which is why Kirby co-created another version for Marvel.

Thor is the son of Odin, the mighty All-Father and one of the most powerful characters in the Marvel universe. He is the Asgardian God of Thunder and is the carrier of the legendary hammer Mjolnir. Being designated as Odin’s “heir”, Thos has tested himself on numerous occasions by fighting strong enemies and doing dangerous tasks, just to prove his worth both to himself and to his father. He had a strong rivalry with his adoptive brother, Loki.

While being an important character in Marvel’s cosmic stories, Thor is also very important for Earth, which he regularly protects. While on Earth, he usually passes himself of as Donald Blake, M.D. Thor has had a relationship with human Jane Foster, who was depicted as Dr. Blake’s nurse in the comics; Jane Foster even became Thor at one point in the series. He is also a member of the Avengers and has saved Earth on numerous occasions.

Thor is certainly one of the most popular characters in the Marvel universe. He has appeared in all forms of derivative material, including TV shows, video games and movies. In the MCU, he is portrayed by Chris Hemsworth.

Who is stronger – Thor or Thanos?

Comparing Thor and Thanos is both difficult and easy at the same time. Namely, based on what we know from the comic books, Thor and Thanos have very similar powers and are generally considered to be of similar strength. This makes their comparison easier in the sense that they don’t require a thorough comparison because of the similarities, but also difficult because you cannot easily determine which one of them is stronger.

Thanos is a very powerful Eternal and has proven himself more powerful than most characters, even without external enhancements such as the Infinity Stones. He is immortal, has superhuman strength, speed and durability, he is practically invulnerable, can teleport and regenerate, he can manipulate matter, use telepathic abilities, manipulate energy and even fly; he also has superhuman intelligence. As for Thor, he is a god and as such, he has a lot of the same powers his father, Odin, has. But he is still weaker than Odin. He is superhuman in most aspects (strength, durability, intelligence, longevity, etc.) but unlike Thanos, he is not immortal. He is practically invulnerable, but he does age and, like all the other Asgardian gods, will eventually die; it’ll just take him longer than your average bear to do so. The thin with Thor is that he has access to a variety of unimaginable powers that stem from Asgard, the best-known being the powers of Mjolnir, the Stormbreaker and the Odin Force. Thor can also use other forms of energy and blend with them, as he did with Power Cosmic.

As for the official numbers, the Official Handbook of the Marvel Universe A-Z (2010)

As you can see, aside from their intelligence, Thor and Thanos are practically equal. Thanos could, thus, beat Thor with better preparation, but even that wouldn’t be a guarantee for him. If we’re talking about Thor and Thanos with their basic powers, we can conclude that the fight would end in a draw; the comics have also not been consistent here, having both Thanos and Thor winning fights on several occasions.

The catch here is that Thor has access to a wider array of powers than Thanos. Certainly, with the Infinity Stones Thanos is practically unstoppable, but the Mad Titan has proven himself to be a powerful foe even without them (King Thanos). On the other hand, Thor has potential access to a large number of Asgardian powers, which can give him an incredible level of power, in which case he would certainly overpower Thanos without much effort. There’s even the forbidden Warrior’s Madness, which can turn Thor into an unstoppable beast, in which case Thanos would hardly stand a chance.

So, to conclude – Thanos and Thor are very similar on a general level and it would be hard to give a straightforward answer as to their powers. On the other hand, when enhanced, Thor would probably – at full power – be able to beat Thanos at his best.