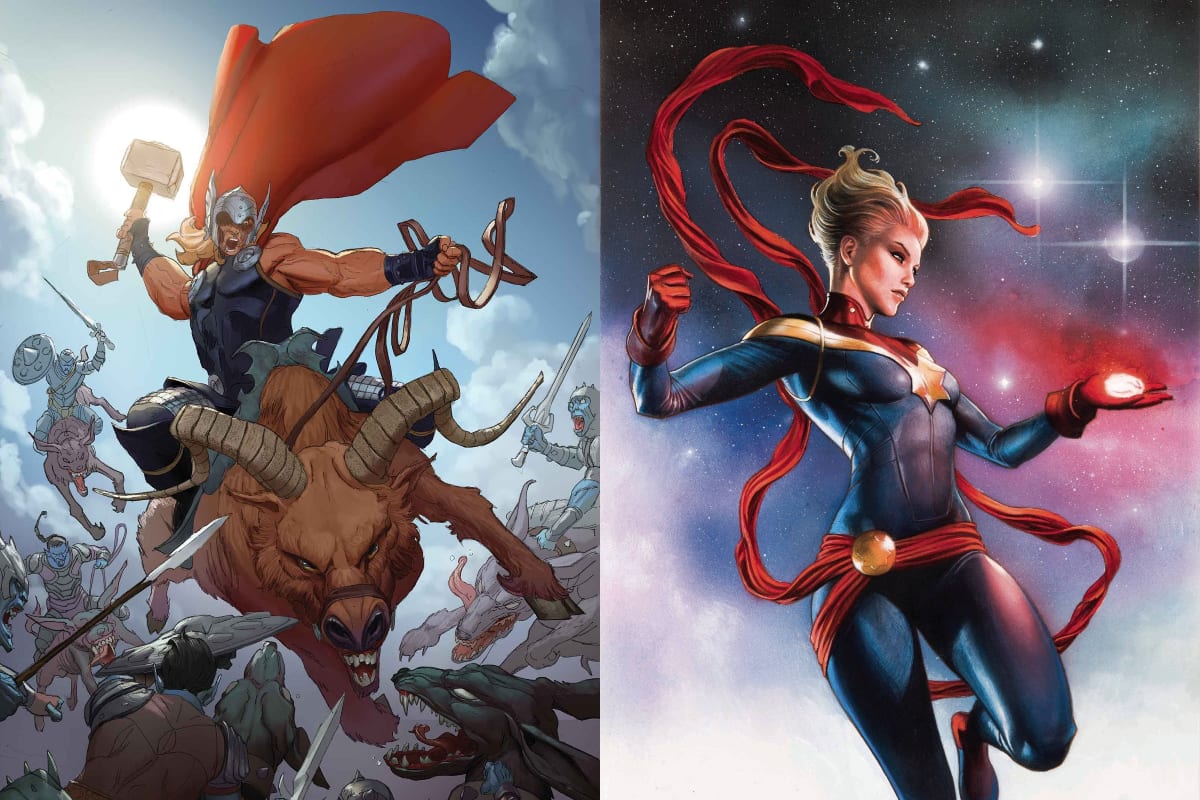 So far, in our series of comparisons, we’ve compared superheroes with supervillains and – on one occasion – two supervillains. But now, we have reached a point where we can freely compare two superheroes and we’ve decided to see how Thor, Marvel’s God of Thunder, would match up against Carol Danvers, the current Captain Marvel. Both of them are very strong and it’s lucky they’re on the same side, but who is actually stronger? Let us see.

Thor is definitely stronger than Captain Marvel, as is evident in the comic books published by Marvel. While the both of them have truly immense powers, Thor being a god and having potential access to a wide array of Asgardian powers makes him the stronger one in this match-up.

Who is Thor and What are His Powers?

Thor Odinson is a fictional superhero appearing in comics published by Marvel. He was created by Stan Lee, Larry Lieber and Jack Kirby and was inspired by the Norse god Thore, with whom he shares most of his traits. He made his debut in the comic book Journey into Mystery #83 (1962) and has since become an essential name for Marvel Comics, being the center of several stand-alone series and part of several superhero groups and series. Thor was initially created by Kirby for DC Comics back in the fifties, but the character never achieved any sort of prominence, which is why Kirby co-created another version for Marvel.

Thor is the son of Odin, the mighty All-Father and one of the most powerful characters in the Marvel universe. He is the Asgardian God of Thunder and is the carrier of the legendary hammer Mjolnir. Being designated as Odin’s “heir”, Thos has tested himself on numerous occasions by fighting strong enemies and doing dangerous tasks, just to prove his worth both to himself and to his father. He had a strong rivalry with his adoptive brother, Loki.

While being an important character in Marvel’s cosmic stories, Thor is also very important for Earth, which he regularly protects. While on Earth, he usually passes himself of as Donald Blake, M.D. Thor has had a relationship with human Jane Foster, who was depicted as Dr. Blake’s nurse in the comics; Jane Foster even became Thor at one point in the series. He is also a member of the Avengers and has saved Earth on numerous occasions.

Thor is certainly one of the most popular characters in the Marvel universe. He has appeared in all forms of derivative material, including TV shows, video games and movies. In the MCU, he is portrayed by Chris Hemsworth.

Who is Captain Marvel and What are Her Powers?

Jumping in the void created by the DC-Fawcett lawsuit, Marvel Comics created their version of Captain Marvel in 1967, with the character debuting in Marvel Super-Heroes #12 (1967). The first among several iterations of the character was a member of the Kree race known as Mar-Vell, who donned the costume until 1982, when he was replaced with Monica Rambeau, after dying from cancer. Monica Rambeau was Captain Marvel until 1993, when she gave the title to Genis-Vell, Mar-Vell’s son. After more than a decade, Genis-Vell gave the mantle to his sister, Phyla-Vell, who would be known as Captain Marvel from 2004 to 2007. A Skrull sleeper agent known as Khn’nr became the fifth Captain Marvel in 2007, donning the name for just a couple of years, until 2009, when he was by Noh-Varr. The most recent and current Captain Marvel is Carol Danvers, who inherited the title in 2012 and has been further popularized by MCU, where this iteration appeared in the movie Captain Marvel and in other Avengers movies. Because of this fact, we are going to use Carol Danvers as the protagonist of our article.

Who is stronger – Thor or Captain Marvel?

We have given you a brief introduction to the characters themselves. Now let us see whether Carol Danvers can hold her own in a fight against Thor.

This comparison is really not that fair, if you look at the general comic book traits of the characters and their history – Thor’s just a lot stronger than any iteration of Captain Marvel, Carol Danvers included. Although Carol could pose a threat with her Binary Powers, Thor still has access to a variety of Asgardian powers and abilities which easily surpass Carol at her full potential. Although you will find examples of Captain Marvel beating Thor (like the recent Captain Marvel #12, where Dark Carol actually killed Thor), it’s really not a general rule, but rather an author’s individual decision to make it a one-time thing. Objectively speaking, Captain Marvel doesn’t stand a chance.

Let us see how the Official Handbook of the Marvel Universe A-Z (2010) compares the two of them in the following table:

As we can see, Thor beats Captain Marvel in almost all fields. In that respect, Thor is much more similar to Thanos and, as we’ve already stated in our earlier text, Thanos could easily beat Captain Marvel in a fight. Even with a good tactical approach, Captain Marvel wouldn’t have much luck, since their intelligence level is not that different.

Let us see what powers they have.

Firstly, let us see what Thor can do. Thor is a god and as such, he has a lot of the same powers his father, Odin, has. But he is still weaker than Odin. He is superhuman in most aspects (strength, durability, intelligence, longevity, etc.) but unlike Thanos, he is not immortal. He is practically invulnerable, but he does age and, like all the other Asgardian gods, will eventually die; it’ll just take him longer than your average bear to do so. The thin with Thor is that he has access to a variety of unimaginable powers that stem from Asgard, the best-known being the powers of Mjolnir, the Stormbreaker and the Odin Force. Thor can also use other forms of energy and blend with them, as he did with Power Cosmic. There’s also the forbidden Warrior’s Madness, which can turn Thor into an unstoppable beast, but also destroy his psyche, which is why it was banned by Odin. Carol Danvers, as Captain Marvels, has a very similar plethora of abilities, but they are at a much lower level when compared to Thor’s. Captain Marvel has several superhuman traits (strength, stamina, durability, speed) and can even fly. She has regenerative abilities and can harness and use different types of energy for both offence and defence. Her real powers are unlocked when she manages to activate her Binary Powers.

Now that we’ve given you all the information, we think you can see for yourselves that Thor is just too powerful for Captain Marvel. Sure, Carol is a very powerful hero, but when compared to a god – she doesn’t stand much chance. A writer can alter such things and give Carol the victory – he has that liberty – but when compared objectively, Thor is really the stronger one of the two. Plus, just remember that Thor is the son of Odin and that Odin is one of the most powerful beings in the entire Marvel universe.