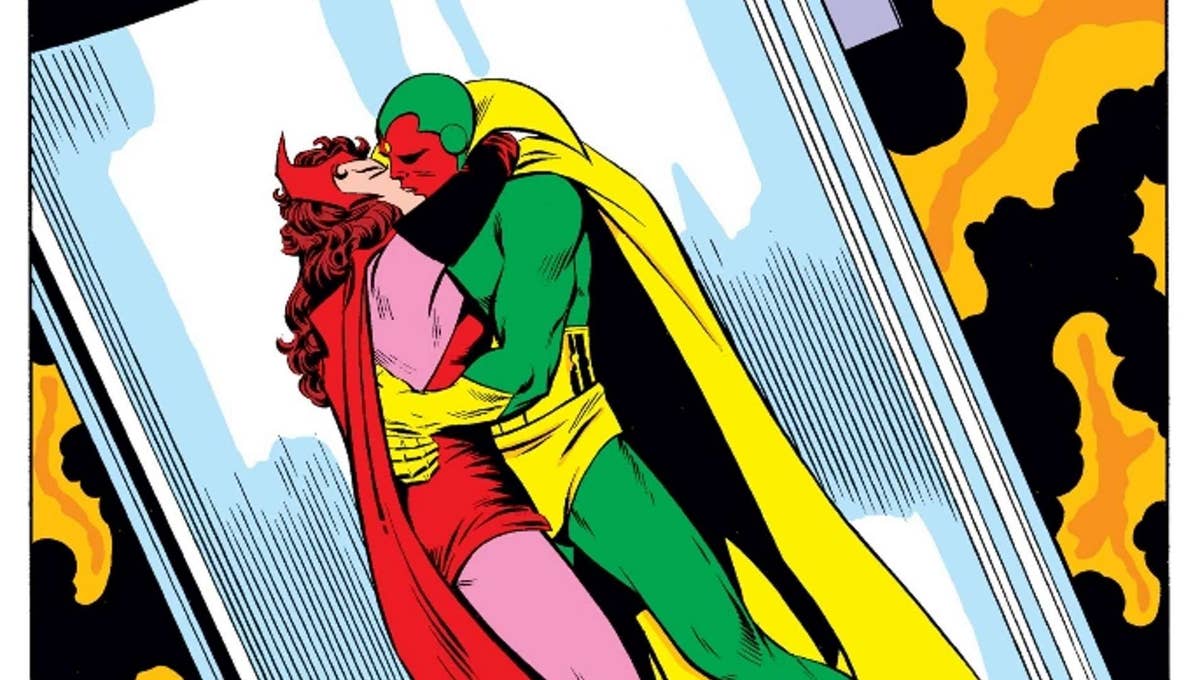 Thanks to the popularity of the Marvel Cinematic Universe (MCU), Scarlet Witch and Vision have become mainstream characters, which wasn’t really the case before, especially when the latter is concerned. Still, the on-screen romance between the two, as well as the announced WandaVision TV series on Disney+, turned these two into essential characters within the Marvel Universe. This is why we have decided to compare them for you in today’s article. Keep reading to find out more!

Despite Vision having a more diversified powerset, we think that Wanda’s magical powers are more than enough for her to come out as the winner in this very-unlikely-to-happen fight.

Who is Scarlet Witch?

Scarlet Witch is the superhero name of Wanda Marya Maximoff, a fictional superhero from the Marvel Universe. She was created by Stan Lee and Jack Kirby, debuting in The X-Men #4 (1964). She was initially depicted as a mutant, but her story was recently retconned and she became a mutated human through genetic experimentation.

Scarlet Witch was initially a supervillain along with her twin brother Quicksilver (Pietro Maximoff) and one of the founding members of the Brotherhood of Mutants, a villainous group led by Magneto. In most of the early depictions, she was portrayed as a mutant, and, for much of the character’s history, was considered the daughter of the mutant Magneto and the half-sister of Polaris. This was later retconned. The Scarlet Witch possesses abilities to alter reality in unspecified ways and is a powerful sorceress.

Later on, though, the mutant version of the Scarlet Witch is depicted as a superheroine and a regular member of the Avengers superhero team. She also becomes the wife of fellow superhero and teammate Vision, with whom she has two sons, Thomas and William.

The character’s in-universe backstory and parentage have been changed more than once throughout the years. During the 1970s, Pietro and Wanda have been depicted as the children of the superhero Whizzer (this is why, at one point, she has been known as Wanda Frank), but a 1980s retcon revealed the Scarlet Witch and Quicksilver are the unknown offspring of supervillain Magneto. They were born to Magneto’s estranged wife in Transia, and were left in the care of their adoptive Romani parents. Still, during the 2010s, their story was once again retconned, and it was revealed that Quicksilver and she are not mutants but were kidnapped and used as subjects of genetic experimentation by the High Evolutionary, then misled to believe Magneto was their father.

Due to her increasing popularity, Scarlet Witch has appeared in a lot of derivative materials, including TV shows, video games and movies. In the Marvel Cinematic Universe – movies and TV shows included – she is portrayed by actress Elizabeth Olsen.

Vision is a fictional characters from the Marvel Universe, an android superhero and a member of the Avengers. He was collectively created by Roy Thomas, Stan Lee and John Buscema, debuting in The Avengers #57 (1968). Vision is loosely based on the Timely Comics character of the same name.

Vision was an android created by Ultron, a villainous robot who wanted to destroy the Avengers. Vision was created as his villainous henchman (Ultron referred to him as a “synthezoid”) and was sent to lure the Avengers in a trap. Wasp (Janet van Dyne) is the first to encounter the “synthezoid”, and describes it as a “vision”. Adopting the name, Vision is convinced by the Avengers to turn against Ultron. After learning how Ultron created him, using the brain patterns of then-deceased Simon Williams (Wonder Man), Vision becomes a member of the team.

During his initial run, Vision was depicted and viewed as a “synthetic human”, with his android nature pushed a bit to the sidelines. This was best evident in his romantic relationship with Scarlet Witch, whom he eventually marries; they also have two children. This was quite unusual behaviour for an android, but again – he wasn’t viewed as one during the time.

A big change happened in 1989, when writer John Byrne decided to emphasize Vision’s android nature and move away from the “synthetic human” label. He wiped out all of his memories and revealed his wife children to be essentially imaginary constructs. He also included a two-page spread showing a dismantled Vision. Journalist Karen Walker later commented, “This image alone has probably done more to shape how future writers (and readers) perceive the character than anything before or since. Once seen broken down into component parts, it’s hard to truly move past that image and think of Vision as a synthetic man, not a machine.” This move really did change the comic book version of the character forever.

With differing origin stories, Vision has appeared in different derivative materials, including TV shows, video games and movies. In the MCU, he is portrayed by Paul Bettany, who is going to reprise his movie role in the WandaVision television series.

We start off our answer to the question from the title by comparing the powers of these two characters. This is our usual route in such articles.

As far as Scarlet Witch is concerned, her powers were initially not precisely defined. Due to her mutations, she was able to use “hex powers”, that could cause random and unlikely events to take place, but the writers never defined her powers precisely. This allowed all future writers a lot of creative freedom, and with time – Scarlet Witch became more and more powerful. Later writers gave her an increased control over her power, so that she could cause specific events and not just random ones. Along with this, she later learned how to use exact magic, similar to the one Doctor Strange uses, but it was later defined as being chaos magic. This was offered as an explanation for her various feats that seemed to go beyond probability alteration, as well as why her hexes almost always have an effect that is favorable to her goals.

Yes, in the “Avengers: Disassembled” storyline, her powers were once again retconned. Chaos magic was removed and replaced with reality warping, which gave Scarlet Witch an incredible amount of power and instantly made her one of the strongest characters in the Marvel canon; with these powers, she was able to change the whole universe. Despite them being taken away once again during a small retcon (where it was explained that her powers were temporarily amplified by an outside force), these powers seem to have been given back to her later, when it was revealed that she was able to exhibit a degree of resistance to the Phoenix Force and can cause pain to its hosts, which is truly incredible.

Vision was once described as “every inch a human being—except that all of his bodily organs are constructed of synthetic materials.” In battle, this enabled him to use human adaptability, while utilising combat manoeuvres resembling those of a robot. The Solar Jewel on fhis orehead is capable of discharging solar energy in form optic beams; with this, he can fire beams of infrared and microwave radiation. In extreme cases, he can even discharge this same power through the Solar Jewel itself, which amplifies its destructive effects considerably, albeit at the cost of losing most of his resources.

Vision can likewise change his own density by interacting with an unknown dimension. This, at its lowest, allows him flight and a ghostly, phasing intangibility, and at its heaviest, a density which gives him superhuman strength, immovability, and a diamond-hard near invulnerability. Vision also has superhuman senses, superhuman stamina, reflexes, speed, agility, strength (even without being at high density), superhuman analytical capabilities, and the ability to process information and make calculations with superhuman speed and accuracy. He was trained in hand-to-hand combat by none other than Captain America, is an expert in the combat use of his superhuman powers, and is a highly skilled tactician and strategist. The Vision is an expert on his own construction and repair.

Now that we’ve seen both their powers, we can get to answering the main question – who is stronger?

In terms of physical power, Vision would be able to defeat Scarlet Witch with relative ease. Vision is a much better fighter and he has a lot of different abilities that can make him physically stronger and very hard to hit. Wanda, on the other hand, is relatively defenceless in a hand-to-hand fight and would lose to most other characters in such circumstances.

As far as other powers are concerned, Vision does seem to have more at his disposal. He can shoot energy beams, he can change his structure and has superhuman abilities. Scarlet Witch, on the other hand, doesn’t have so many abilities, but her magic is extremely powerful. She can warp reality to her own will and is even capable of resisting the Phoenix Force, which is a truly amazing feat. And if you include the full potential of her powers (something talked about often within the context of the MCU), she might even be as strong as Thanos.

So, who would win? Despite potentially causing a stir, we think that Scarlet Witch would ultimately be able to defeat Vision. Yes, Vision does have more powers and he could potentially knock Wanda out with relative ease, but if Wanda would manage to activate her powers, Vision wouldn’t be able to do much. Since he’s basically a machine, Wanda could easily use her reality-warping powers to completely deconstruct Vision and thus win in a fight.