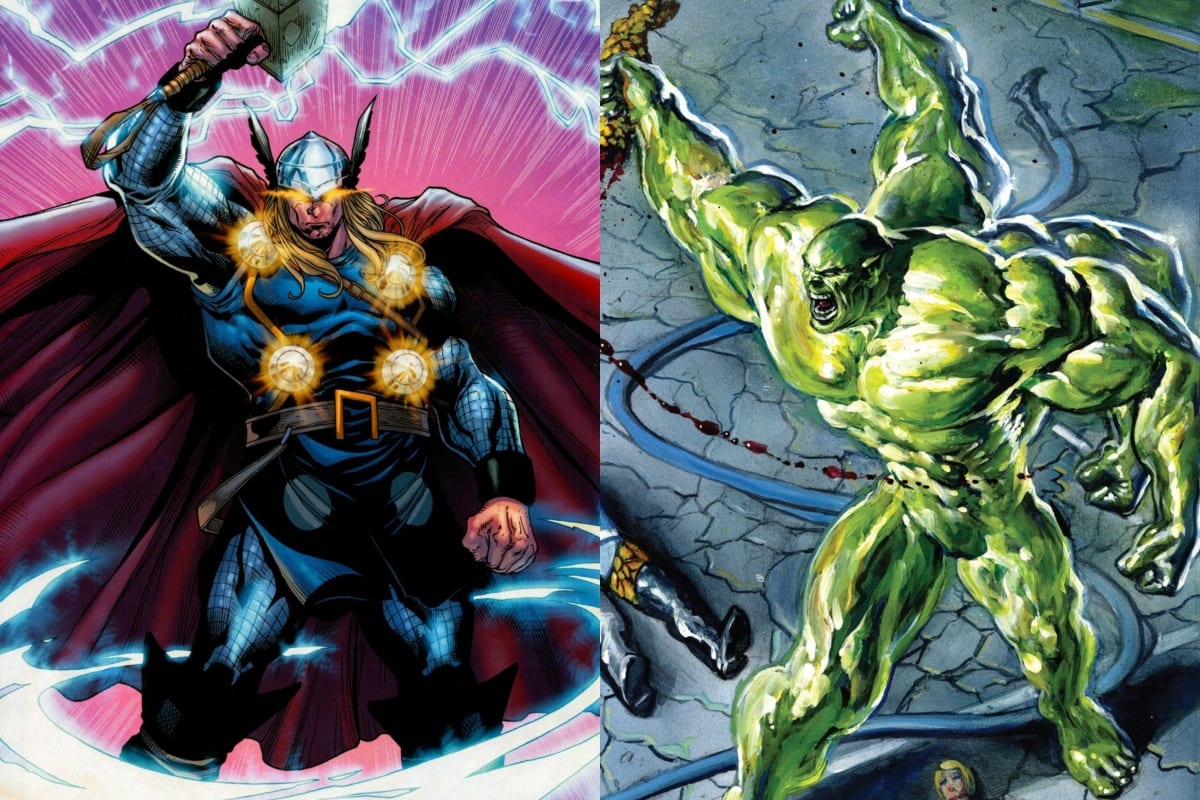 In today’s comparison, we are going to be dealing with two alternative versions of two of Marvel’s well-known characters. Space Punisher Hulk is a version of the Hulk from Earth-12091, while Rune King Thor is basically Thor, but with access to an enormous amount of power. One is known as the strongest iteration of the character, while the other is an overpowered god. Who would win in a direct clash? Keep reading to find out!

Who is Space Punisher Hulk?

Space Punisher Hulk is a fictional character from the Marvel Universe and an alternative version of the superhero Hulk from Earth-12091. He was created by Frank Tieri and Mark Texeira in 2012, and had his debut in Space: Punisher #2. It is considered to be the strongest incarnation of the Hulk ever.

Space Punisher Hulk was created in the same way as the regular Hulk in the primary universe. Namely, physicist Bruce Banner was exposed to large quantities of gamma radiation which enabled him to transform into Hulk, yet while the Earth-616 (Prime Universe) version of the character remained relatively “normal”, the Earth-12091 turned into a proper monstrosity.

The main difference between this version of the Hulk and the Prime Universe one (sans the visuals) is that Space Punisher Hulk is a completely separate entity from Bruce Banner, whose body is literally trapped inside Space Punisher Hulk, which means that Banner’s death doesn’t affect him in any way.

This Hulk was much taller than the Prime Universe version and it has a total of four arms. It also gained exceptional physical powers and was feared throughout the universe. Like on Earth-161, general “Thunderbolt” Ross constantly tries to stop him, but fails.

This version has not yet appeared in any derivative materials and has only appeared in two comic books, both set on Earth-12091.

Who is Rune King Thor?

Rune King Thor is actually a stronger version of Prime Universe’s Thor, i.e., the regular Thor we know from the comics. He was introduced in The Mighty Thor Disassembled storyline, which was part of the larger “Avengers: Disassemble” event, written by Mark Oeming.

Rune King Thor came to be after Thor desperately sought a way to defeat Loki, who had taken over Asgard after destroying Mjolnir and defeating or killing a lot of Thor’s allies. After being saved by Sif and Beta Ray Bill, Thor finally decides to seek the wisdom of Odin, his father. After a brief journey, he met the Odinpower in the form of a boy, who explained to him that it abandoned him because of his recent actions, which prove that he is not ready for the answers he seeks. Thor then finds out how Odin became an actual god.

The Odinpower then led Thor to the Well of Mimir, where the God of Thunder gave up one of his eyes as a sacrifice; when one eye was considered unworthy, Thor gave up his other one as well and drank from the Well, thereby gaining insight into the history of the gods and discovering that Ragnarok is an ever-repeating cycle. In order to gain more knowledge, he hung himself on Yggdrasil. This ultimately killed him, but he resisted death and it brought him to Those Who Sit Above In Shadow. They revealed themselves as gods to the Norse gods and caused the Ragnarok Cycle, feeding off the energies of the gods. Thor ultimately defied their omniscience and was reborn as Rune King Thor.

This version of Thor was so powerful that it defeated all the enemies, including Loki, with relative ease. But, his biggest feat was not restoring peace in the Nine realms, but rather stopping the Ragnarok Cycle, which was a feat thought impossible to achieve. After that, Rune King Thor falls into the Thorsleep, becoming one with the universe and resting.

Comparing the powers and abilities

Both Space Punisher Hulk and Rune King Thor have appeared in just one story so far, with the former appearing only in two comic books, and the latter in the above-mentioned story that is part of the “Avengers: Disassemble” narrative. We’re pointing this out so that you know that we’ve probably not seen the full extent of these two characters’ powers, but we’ll present you what we know.

Space Punisher Hulk can be described as a destructive killing machine, gaining a reputation for destroying spaceships. He has fought and murdered the Fantastic Four, ripping out the Thing’s hand and tying up Mr. Fantastic in a knot in the process. He strangled Doc Samson with his ow hair in one of the most iconic and disturbing scenes in this storyline. He attacked the hideout of Barracuda when the Punisher tried to gain information about the Six Fingered Hand. He killed some of the mercenaries hired to kill the Punisher but was enraged by The Leader’s sonic device. Punisher managed to escape before the Hulk could kill him. He also bit through Sabertooth and killed Deadpool by literally tearing his head off with his hand. He also ripped out Bruce Banner from his chest and let him get shot without it affecting him whatsoever. In addition to that, he broke the Leader’s back in combat. Later, he defeated and killed six Watchers singlehandedly, which is amazing.

Likewise, he is virtually invulnerable, seemingly indestructible and invincible, and he can both move faster than light and pass through barriers of existence and reality, which is what he did to kill the Watchers. This version of the character is considered to be the biggest threat to the universe since Galactus made his presence known.

As for Rune King Thor, his powers and abilities are practically immeasurable. Namely, by sacrificing both his eyes and hanging himself from Yggdrasil, Thor has gotten access to a series of information on the world, but also new attacks and abilities.

He has annihilated Loki’s army and associates in a matter of minutes, all while aware of his heroic side and never going out of control. He even managed to defeat Loki and pull his head off his body, thereby leaving him alive to suffer. This guy also stood up against Death and rejected it, which is how he came to meet the Those Who Sit Above In Shadow. He defied even them and managed to destroy the Tapestry of Fate, thus ending the Ragnarok Cycle and saving the universe once more. He also destroyed Yggdrasil while in this form.

After having done all of that, Thor enters Thorsleep and goes to sleep for a while, at least, like he says in the comic book.

Now that we’ve answered every relevant question about the two, there is really no doubt as to the winner. Namely, despite all of his strength and possible invulnerability, Space Punisher Hulk wouldn’t stand a chance against Rune King Thor.

In this case, it’s not just a matter of pure physical prowess. Space Punisher Hulk is exceptionally strong, that much is obvious, but when compared to Rune King Thor, his powers aren’t all that great. Rune King Thor has gained the powers of exceptionally potent divine beings who are above Hulk’s level in any possible reality. We’re talking about beings that are stronger than “regular” Asgardian deities and we sincerely doubt that Space Punisher Hulk would be able to defeat his universe’s Odin, simply because if the Hulk is that strong, just imagine how much stronger Odin would be? Of course, the writers could tone down Odin a lot, but that would just be cheating.

But yes, even if we disregard pure physical power, Rune King Thor has so much more to offer than Space Punisher Hulk that this is really a no-brainer of sorts. This guy has followed in Odin’s footsteps, but has gone even further, exploring even more secrets of the known universe and gaining access to even more magical powers than Odin. The sheer number of possibilities for Rune King Thor is so big that Space Punisher Hulk would not be able to do anything against all those powers. Space Punisher Hulk is strong and fast, but besides that, he is not able to do much, and while that does have some importance when fighting regular characters, such feats are trivial when compared to the world-shattering powers Rune King Thor has.